At 3.52 metres, yesterday afternoon’s high tide was one of the highest this month.  I couldn’t resist the temptation!  After a morning spent tapping away at the keyboard, I felt that I had earned a break.  I headed for Olhão, definitely one of the best places to see flocks of gulls and waders sitting out the period of high water.

As well as wanting to see flocks of roosting birds, I went with two other objectives:  I thought there would be a good chance to photograph Mediterranean Gulls and Caspian Terns; I also expected to find a few colour-ringed birds among the hundreds of gulls. 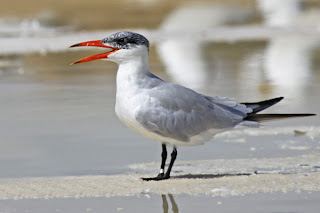 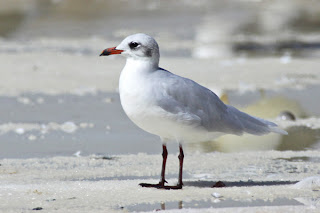 The afternoon was largely successful.  By the time I arrived thousands of birds had already gathered.  There was nothing unusual that I could find but the numbers were impressive.  Eventually I managed to get a few reasonable images of the two target species but I managed to find only one colour-ringed Lesser Black-backed Gull.  Six colour-ringed Greater Flamingos were some consolation.

The Lesser Black-back had been ringed as an adult on 30th May 2011 at IJmuiden, Forteiland in The Netherlands.  Only a week ago it had been reported from the Marismas del Odiel in Spain.  Thank you, Kees Camphuysen for these details – if only we had such quick replies to all our ring reports!

As I was coming away I hesitated to drive past an area where several hundred gulls were resting even though they were much too far away for me to have read any rings that there might have been.  As I was looking at them through the ‘scope, a Portuguese guy rode past on a bike, a man probably in his sixties.  From the way he was dressed, I guessed he was going fishing.  We both said ‘boa tarde’, as is customary, but he went on his way with hardly a pause.

Minutes later, just as I was packing up and ready to go, I realised that the fisherman had returned.  He was standing about 30 metres away, waving to me, beckoning me to follow him.  He was holding his hands to his eyes making as though he had binoculars.  Had he found a Ring-billed Gull?  Did he need help identifying a Dowitcher?  Or did he just want to show me the flocks of birds that I had spent the last two hours looking at?  My guess was the last of these!  He had no English to tell me and I had no Portuguese to explain that I was already aware of the hundreds of birds that he had just happened upon.

What to do?  Should I ignore him and be on my way?  No, he was just so insistent and so enthusiastic, there was nothing for me to do but go with him, following behind as he encouraged me to go slowly and quietly!  Eventually, he had me sit on a low wall and from there we looked across to a saltpan that was crowded with honking Greater Flamingos.  Very soon he went on his way, leaving me to enjoy the birds but after a few minutes I could see him again, about 200 metres away this time and again beckoning me to join him for a different and better view.  There was no alternative!

There is a widely held believe that the interest that most older Portuguese have in birds extends only as far as wanting to know how to cook them.  However, I like to think that this fisherman was an exception.  My guess is that he has ridden his bike past all these birds on hundreds of occasions but that this day he was so lifted by the impressive sight and sounds of so many gulls, waders and Flamingos that he immediately wanted to share them with somebody.  I might have wished that it had been a Ring-billed Gull but I’m glad that I didn’t resist or reject his random act of kindness in wanting me to be that somebody and coming back to get me.

Eventually I did get away and on the way home I called in at Santa Luzia saltpans.  The subject “She’s Back” refers not to June (who remains in Colombia) but to Redshank H19.  Regular readers will perhaps remember that this Dutch-ringed Common Redshank has spent most of the last two winters (its only two winters) in the same corner of the same saltpan at Santa Luzia.  She has been back in The Netherlands during the summer but I hear from Wim Tijsen who ringed the bird that she has so far failed to find a mate there.  Now she is back here in the Algarve and it was only because I have been looking for her that I spotted her in amongst a flock of Black-tailed Godwits in water that was so deep I could hardly see the ring on her leg.  I wonder whether she will spend the next six months in the same saltpan – I bet she does! 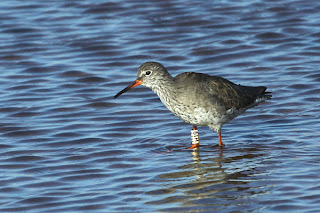