Left to our own devices we might well have stayed home yesterday.  From just a quick look at the weather forecast we could see that it would be a difficult day for birds and birdwatchers with winds of 20mph or more from the NNW.  It was going to be cold and birds were going to be sheltering and hard to see.

However, arrangements were made and we were committed: June to a half day visit to Castro Marim, Peter to a full day in the Castro Verde area in the Baixo Alentejo.

The star bird at Castro Marim was undoubtedly the female Red-necked Phalarope that June found at Cerro do Bufo.  Like many of the other waders here now it was a bird that is moulting into its breeding plumage.  It is only the second of this species that we have seen in the Algarve and is sufficiently rare here that it will require a submission to the Comité Português Raridades. 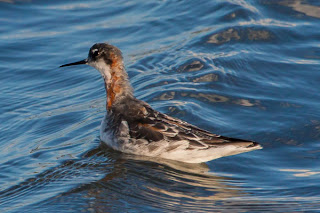 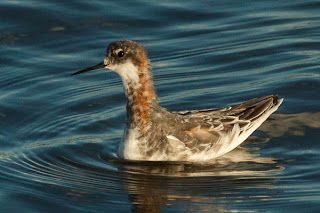 As well as a dozen other wader species, the supporting cast included Little Bustard, Golden Oriole, Great Spotted Cuckoo, Greater Flamingo, Montagu’s Harrier, Red-rumped Swallow, Woodchat Shrike, Hoopoe and Azure-winged Magpie, some of these very common birds to us but much appreciated by visitors who are here for only a week.

Up in the Alentejo, the day’s bird list included most of the target species but raptors in particular were in short supply and there was only a quick glimpse of Black-bellied Sandgrouse.  Highlights, again from a visitor’s perspective, were Collared Pratincoles, Griffon & Black Vultures, Spanish Imperial Eagle, Rollers, Lesser Kestrels, Great & Little Bustards, Short-toed Eagle, Calandra Lark and Montagu’s Harriers.  However, finding birds was hard work and the area's other attractions including the continuing spectacular display of wildflowers were a welcome diversion. 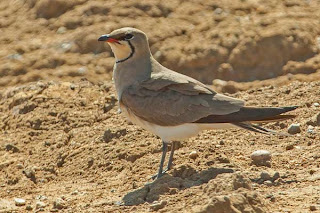 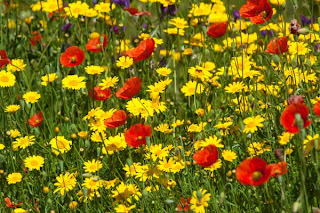 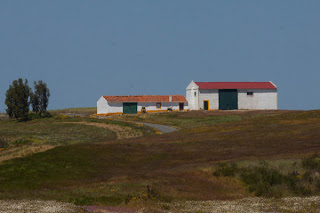 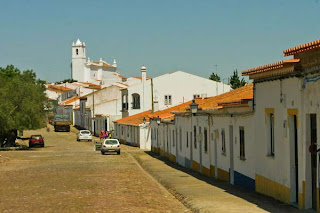 Days out from Tavira

Last week was a busy one for us with days spent in the Castro Verde area of the Baixo Alentejo and across the border in Doñana as well as around some of the usual sites in the Algarve.

The Alentejo is at its very best right now.  Both Great Bustards and Little Bustards are displaying and easy to see, there are raptors everywhere (13 species this week), Calandra Larks singing, Black-bellied Sandgrouse, Collared Pratincoles, Great Spotted Cuckoos, Rollers, Black-eared Wheatears and more.  However, what makes this time of the year really stand out is the amazing display of wild flowers – carpets of yellow, white and purple with patches of red.  Truly spectacular! 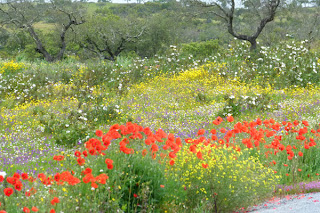 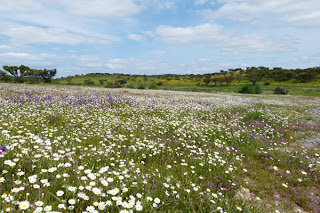 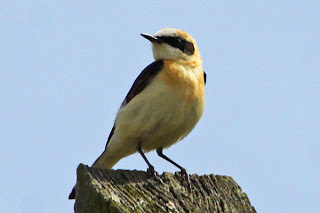 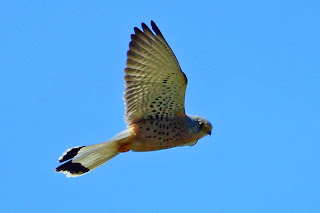 Doñana, too, is really looking good.  In complete contrast to last year’s disappointment following the drought, currently there is water everywhere and, as a result, lots of birds fixing to breed.  In particular, there were hundreds of Greater Flamingos and Glossy Ibises and seven species of herons and egrets.  Throw in a few Gull-billed & Whiskered Terns, some Greater & Lesser Short-toed Larks, Red-knobbed Coots, Great Spotted Cuckoos and an assortment of raptors and waders and it makes a great day trip from Tavira.  There was even a Long-tailed Duck at the Cañada de Rianzuela. 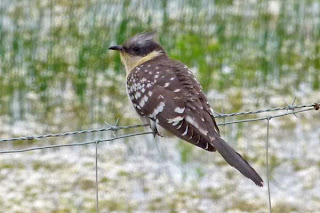 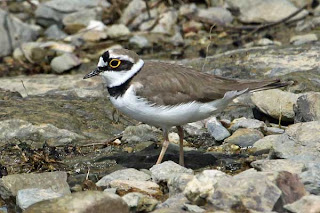 In the Algarve, we’ve been to Ludo, Quinta do Lago, Olhão and, of course, Tavira, all of them within the Ria Formosa.  Highlights for our visitors have included Collared Pratincoles, Little Bittern, Bee-eaters, Caspian Terns, Slender-billed Gulls and Stone-curlews.  Just as much as those, we’ve enjoyed hearing the air filled with the songs of Nightingales, Cetti’s & Reed Warblers and watching Black-headed Weavers busy building their nests. 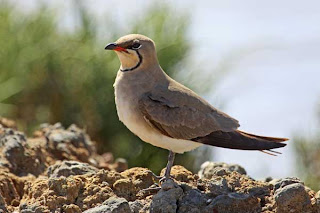 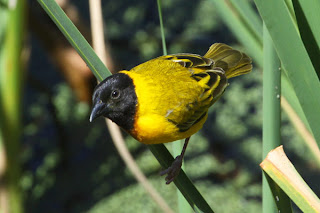 Finally, news of the colour-ringed Common Redshank, H19, which we previously blogged about here.  This bird, which has now spent three winters in the saltpans here, is so faithful to one particular area that when we couldn’t find it on 15th March we were confident that it had left to start its migration to The Netherlands.  At the time, the weather there was awful with temperatures down to minus-3 and it didn’t seem like a good place to be going.  We were worried!  Anyway, the good news is that ‘our’ bird (which we share with Wim Tijsen who ringed it) arrived back on the breeding grounds on 9th April having presumably stopped somewhere on the way to wait for better weather.  We hope for news of a successful breeding season.
Posted by Peter and June at 22:05 No comments:

What's in a name?

It’s good to be seeing Collared Pratincoles again!  These migrants typically start arriving back here in Portugal in late March, some staying to breed in the Algarve, at Castro Marim and in the Ria Formosa, but many more continue inland into the Alentejo.  The earliest date on which we have recorded them is 22nd March (2010) but this year it was April before we saw any. 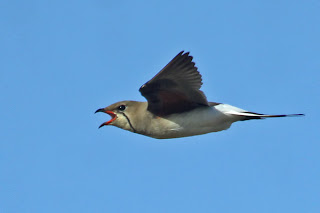 Pratincoles nest colonially in small groups choosing flat open areas, dried mudflats and ploughed fields, usually with short patchy vegetation.  Nest sites change from year to year as conditions vary.  A clutch of three eggs is usual and incubation takes about 18 days.  The young leave the nest after two or three days and fledge after about a month, although the parents may still continue to provide food after that.

From early July the adults undergo a partial post-breeding moult but this is suspended for the southbound migration and by early August most will have left to spend the winter in sub-Saharan Africa.  Although lingering birds have been seen as late as September, most Pratincoles probably spend only about four months here in Europe. 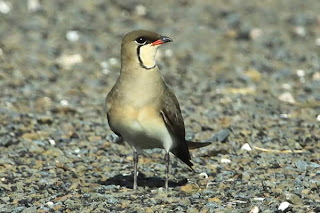 In flight, Pratincoles look a lot like terns; on the ground they seem almost like plovers.  They feed on insects, such as grasshoppers and crickets, which they catch in flight.

Wood Sandpipers mostly pass through the Algarve in March and April on their way north to breed in Scandinavia and Russia (or even Scotland) and then again in August and September on the return journey to spend the winter in Africa.  They are never numerous here (anymore than they are in the UK) as their main migration routes lie further east.  Perhaps it is because they are relatively scarce along the western fringes of Europe that it has sometimes surprised us to find them so numerous when we have been travelling in various parts of Africa. 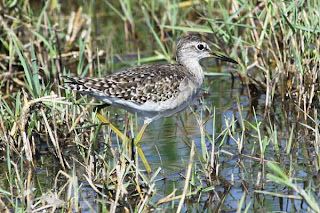 During migration, they are birds that avoid seashores or tidal areas, preferring shallow fresh water habitats, particularly those with wet grassy patches.  Most of the ones we’ve seen in the Algarve have been either at Lagoa dos Salgados or at Castro Marim. 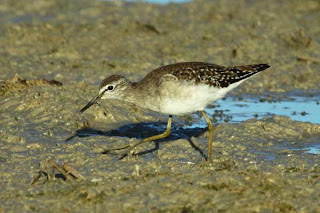 Although Wood Sandpipers usually nest on the ground in dense vegetation they do occasionally use an old tree nest of a Fieldfare, much like Green Sandpipers do.  They usually lay four eggs, which are incubated by both parents but it’s quite normal for the female to depart the scene soon after hatching, leaving the male to care for the young.

So what is it that connects Collared Pratincoles and Wood Sandpipers?  Well, the answer lies with their scientific names: Glareola pratincola and Tringa glareola.  It seems that glareola is derived from the Latin word glarea, meaning gravel.  Seven species of pratincoles have the generic name Glareola and perhaps it is just possible to accept that at least some of them have some sort of association with gravel.  However, glareola does seem to be a rather inappropriate specific name for Wood Sandpiper and so far we haven’t been able to find any explanation for how it came about.

Talking of inappropriate, the name pratincole is derived from Latin words meaning 'inhabitant of meadows', a description which hardly fits Collared Pratincole and definitely doesn't apply to Rock Pratincole and some of  the world's other pratincole species.

Only a few short weeks after they were announced, plans that were designed to attract more birdwatchers to the Algarve have received a serious setback as a result of today’s announcement from the government of a new tax that is to be introduced on optical equipment including binoculars, telescopes and telephoto lenses.

According to a report in local newspaper “Pubico”, this latest Troika-inspired scheme to raise funds involves licensing the use of all optical aids to birdwatching and also photographic lenses with a focal length of 400mm or more.  Full details of the scheme, which will come into force on 1st April, have not yet been announced but it is rumoured that there will be a sliding scale of licence fee based on the magnification of binoculars and telescopes and the focal length of camera lenses.  One version has it that binoculars with 7X magnification will require a fee of 20 Euros per annum but that as much as 50 Euros or possibly more will be payable to use a telescope with a zoom eyepiece or a camera with a 600mm lens. 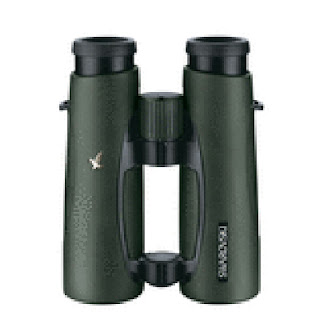 Licences will be available from post offices from 1st May and will be in the form of self-adhesive labels that will be required to be stuck to the instrument in question.  Visiting birdwatchers will be required to declare their optical equipment on arrival in the country and licences will be on sale at post offices within all of the airports and at border crossings from Spain.  Although the licences will cover 12 months use, they will still be compulsory for those who are here for only a week’s holiday.

It is predicted that there will be strict enforcement, particularly during the first month (before licences are actually available) and that there will be a regular police presence at the region’s most popular birding sites such as Lagoa dos Salgados, Quinta do Lago, the Estação de Tratamento de Águas Residuais at Vilamoura and nearby cafés and bars.  Unlicensed optics will also be added to the long list of items that will be looked for by the police who are already deployed at traffic islands throughout the Algarve raising revenue in the form of fines.

A spokesman for the local tourist authority, Carlos Praiabela, is quoted as saying that he was disappointed by the announcement but not surprised.  “As a result of our advertising, many more birdwatchers are expected here, particularly from the UK.  There are more than one million members of the RSPB and clearly the government has seen the potential to raise taxes from them.”

Athene Coruja of the Associação Português  de Observadores de Aves said that her members were dismayed by what they see as an attack on a hobby that is quickly gaining in popularity among local people and hoped that the government might be persuaded to think again about the licence scheme.  “Perhaps it could just apply to non-residents”, she suggested.
Posted by Peter and June at 07:19 4 comments: