We spent yesterday in the beautiful countryside inland from Tavira, something we don’t do often enough. The Serra do Caldeirão is a huge area of attractive rolling hills located between the Algarve coast and the Baixo Alentejo. All too often we drive through them on our way to look for Great Bustards and all those other special birds that occur on the plains around Castro Verde. Only occasionally do we find time to explore them, to drive the narrow roads and tracks between tiny hidden villages and enjoy not just the birds but all the other wildlife that occurs there.

To be honest, the end of June is not the best time to be there! Of course, we knew that but we had a great day anyway. There’s not so much bird song now but we saw plenty of birds, the flowers are long past their best but there are still splashes of colour in the parched landscape and there were lots of butterflies and dragonflies to keep us occupied.

Here are just a few of the day’s photographs: 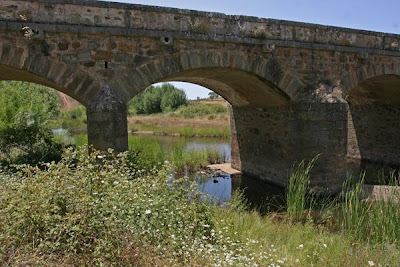 There is still plenty of water running in the larger rivers. We checked under quite a number of bridges like this one, looking for signs of nesting White-rumped Swifts. The swifts take over the nests of Red-rumped Swallows and we found plenty of those, but only at one already known site did we actually see a White-rumped Swift. 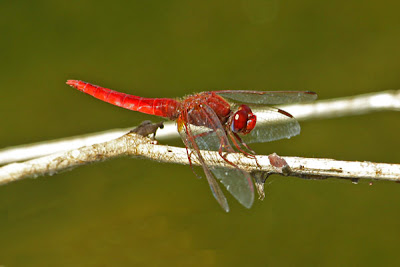 Plenty of water meant that we came across quite a few dragonflies. These are not our speciality but we’re definitely interested, particularly when there are fewer birds to distract us. This one is a Scarlet Darter or Broad Scarlet (Crocothemis erythraea). 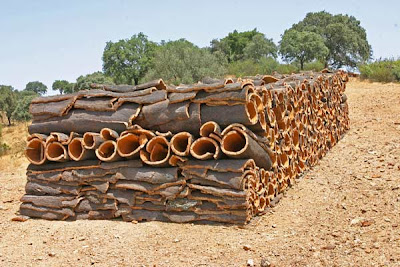 Harvesting cork is a summer occupation in these parts and everywhere we went we saw stacks of cork waiting to be collected and taken for a wide range of applications, not just as stoppers in wine bottles. Cork production is an important industry in Portugal, said to provide half the world’s supply. Although cork is associated in the minds of many people with the Alentejo, the best quality cork apparently comes from further south, here in the Algarve. 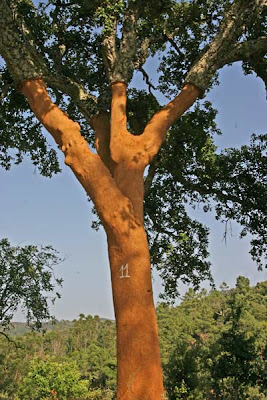 Portuguese law prohibits stripping the bark more than once every nine years in order to protect the trees. The bark has been removed from this tree this year, hence the figure ‘11’ that has been painted on it. Cork Oaks can live to be more than 150 years old or more and it isn’t until they are 25 years old that cork starts to be harvested. 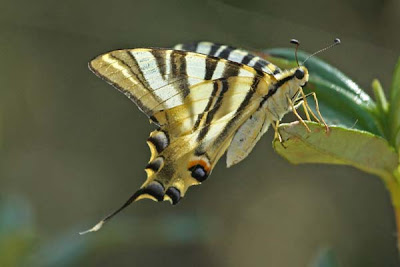 If you’ve read this blog before, you will know that the bigger the butterfly the more we like it! Things have to be pretty slow in the world of birds before we get down to looking at skippers, blues and heaths. This Scarce Swallowtail is our kind of butterfly - it’s the feisthameli subspecies. 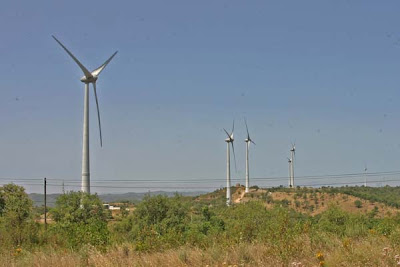 One of the highest points in the area is at Mu, 577m above sea level. Not surprisingly, it has been despoiled with wind turbines but the views are tremendous. 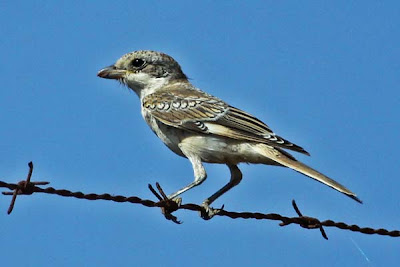 Of course, many of the birds we did see were young ones like this Woodchat Shrike. A gathering of 300 or so White Storks up in the hills was perhaps less expected. 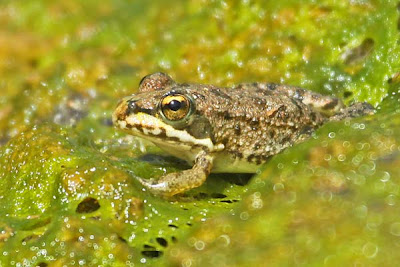 Unfortunately, it wasn’t a day when we saw many reptiles or amphibians – we both enjoy lizards and snakes, in particular. This tiny frog was the only one that posed for a photograph.
Posted by Peter and June at 15:17 No comments:

It’s hot! It has to be expected in the Algarve in June but you can’t ignore the fact and early starts to the day’s birding are highly recommended.

This morning we walked the local saltpans and by 9.00am we were back home seeking refuge from the heat and the humidity. Avocets and Black-winged Stilts have now been joined in the deeper water by returning Black-tailed Godwits, most of them still in their brick-red breeding plumage. There were about 100 of them in the relatively small area that we covered and they made a fine sight. They were, though, completely eclipsed by a stunning Spotted Redshank in full summer plumage. Now that really is a smart bird! 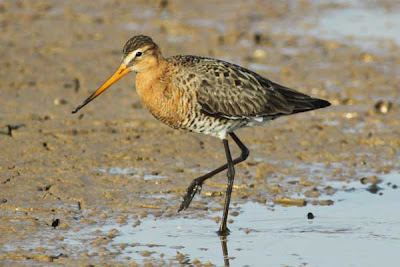 Black-tailed Godwit
Numbers of Greater Flamingos continue to increase and we were quickly into our routine of reading colour-rings. Earlier this week we reported three birds which we knew from their ring numbers to have been reared at Laguna de Fuente de Piedra, near Malaga and this morning we found two more. One of the three earlier birds was one we had seen here in Tavira last November, so we’ll be interested to hear whether it has been reported anywhere else since then.

Other excursions in the last week or so have mostly been half-day affairs and with specific birds in mind. We’ve been to three different sites to check on breeding White-rumped Swifts and at one of these Rufous-tailed Scrub Robins1 were another target. Collared Pratincoles continue to be in demand and so we’ve been to see them; we’ve checked out a breeding pair of Black-winged Kites in the Eastern Algarve and, of course, we’re keeping an eye on the local European Bee-eaters which are always popular. Two different ‘Grey Egrets’ (hybrid Western Reef x Little Egrets) have been seen around Tavira and the number of Audouin’s Gulls here is slowly increasing. 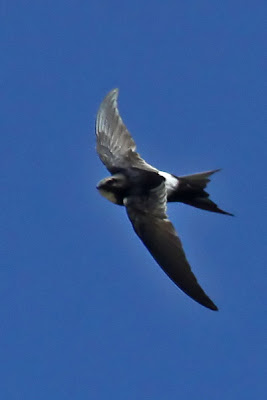 White-rumped Swift
For a recent trip to the Baixo Alentejo we left Tavira at 4.30. However, this wasn’t one of our early starts – it was actually 4.30pm when we set out! Accepting that what was actually a rather late start would give us relatively short birding time in the Castro Verde area, still we set out to find as many as possible of the ‘key species’. Needless to say, there were some we missed but Golden Eagle, Short-toed Eagle, Little Bustard, Great Bustard, Black-bellied Sandgrouse, European Roller, Great Spotted Cuckoo, Griffon Vulture, Eurasian Black Vulture2, Black Kite, Black-winged Kite, Lesser Kestrel, Calandra Lark, Stone-curlew and Red-knobbed Coot were all seen before bad light inevitably stopped play. It just goes to show that you don’t have to be out for sixteen hours to see a decent number of birds. The Red-knobbed Coot was, of course, the bird that we have reported on previously and we were pleased to see that Coot Jnr had more or less doubled in size since our last visit. 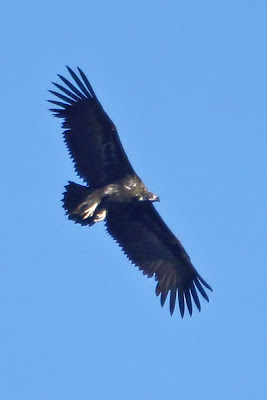 Eurasian Black Vulture
Finally, of particular interest to us, we found a Blue Rock Thrush singing from the roof of a church in the town centre here in Tavira. We’re always pleased to have some bird interest on those occasional days when a trip to the local shops becomes essential!

2 Eurasian Black Vulture is not the name recommended by the International Ornithologists' Union for Aegypius monachus. They prefer Cinereous Vulture; others call it Monk Vulture, a translation of its German name Mönchsgeier.
Posted by Peter and June at 18:43 No comments: