Another Day in the Alentejo

It was another really good day’s birding in the Alentejo yesterday.  With an almost cloudless sky and hardly any wind, the weather was only a little on the cool side of perfect and there was plenty to see.

At this time of year it is almost worth the trip just to see and hear the White Storks.  They’re busy nesting now and it’s fun to watch their displays accompanied by loud bill-clattering.  In bright sunshine, their white, black and red colours make a fine sight against the clear blue sky. 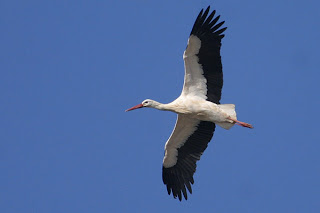 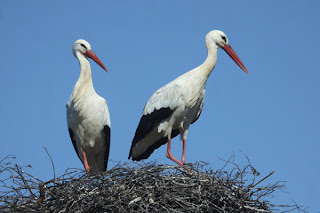 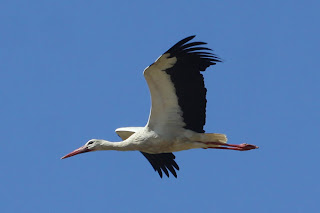 Of course, we also looked for Great Bustards and probably found close to 100 in total.  Some were quite distant but eventually we had reasonably close views of a group of about 40 that included several males that were displaying – they’re much easier to find when they turn themselves into big white powder puffs! 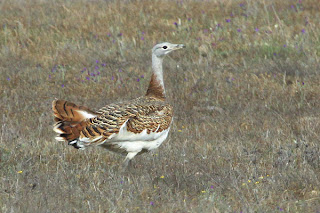 Little Bustards were fewer but even closer.  From the car we were able to watch some that were only a short distance from the road.  The males are already moulting into breeding plumage, showing their distinctive black neck with two white collars.

Most of the Black-bellied Sandgrouse were also quite distant but we did at least have a flock of six pass almost overhead so that we could see some of the plumage details and hear their characteristic flight call.  As they went away from us, the flock split into three pairs that went their separate ways – it’s that time of the year!

It’s because spring is arriving that most of the Common Cranes seem to have left the area and headed back north.  We found only a handful remaining although in previous years we have seen them well into March.

Among the many raptors it was pleasing as always to see Spanish Imperial Eagles, three immature birds putting on a bit of an aerial performance.  It’s fair to say that we are now very disappointed if we don’t see these birds when we visit this area.  And it was good to find that Lesser Kestrels have not only returned but are already occupying nest sites.

We saw only one Great Spotted Cuckoo.  The larvae of processionary moths (Thaumetopoea pityocampa) are among their favourite foods and there are lots of those about the place now.  As usual there have recently been newspaper articles here warning the populace to avoid contact with these caterpillars which in humans can cause reactions ranging from mild itching to anaphylactic shock, yet the cuckoos seem to love them!

It was dusk by the time we got back to Tavira – just right to see a Short-eared Owl flush about 30 Stone-curlews from a field on the outskirts of town.
Posted by Peter and June at 11:21 No comments:

We’re always on the lookout for photo opportunities and very often they are provided by birds being attracted to water.  A little over a week ago we came across several puddles that looked promising with dozens of birds coming to drink and bathe.  Song Thrushes and Redwings seemed to be the most numerous and we saw Blackbird, Robin, Blackcap and several Greenfinches but unfortunately there wasn’t time to stop and see what else there might be.  We knew though that we would soon have to go back and find out!

It wasn’t until yesterday that the opportunity arose.  The weather was ideal and thankfully there was still plenty of water and lots of birds.  As many as 21 species were seen coming to one puddle!  It was good that some of them also perched on nearby bushes while awaiting their turn at the water.

It was impossible to estimate numbers but Greenfinches, Song Thrushes and Redwings were the most numerous until a flock of European Starlings arrived.  Ring Ouzel is a species that we haven’t photographed before and there were at least three different individuals.

Here’s just a few of the day’s many images, all taken from the car. 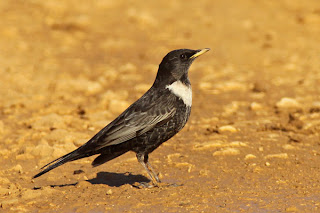 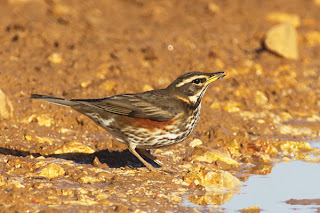 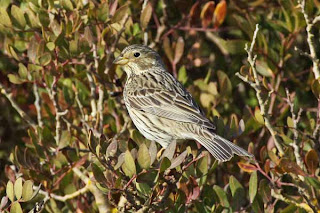 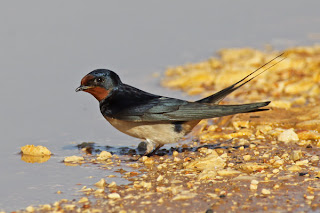 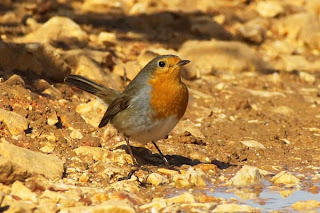 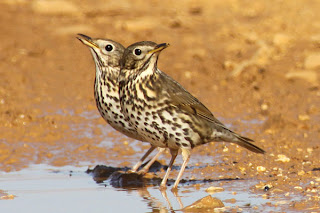 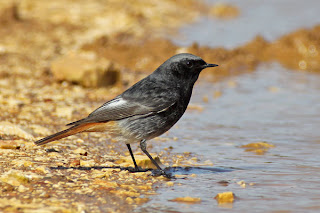 More on Winter Birding in the Algarve

A week ago we described here how good the birding can be in the Algarve during the winter months.  We even went as far as to say that “in a week here at this time of year it should be possible to see around 140 species, maybe a few more with a day trip to the Castro Verde area included”.

At the time we wrote that we had no intention of putting our claim to the test but as things have worked out we find that we have started the month of February with seven fairly relaxed days of birding in the Algarve visiting most of the best birding sites and in addition we have enjoyed a day in the Baixo Alentejo. 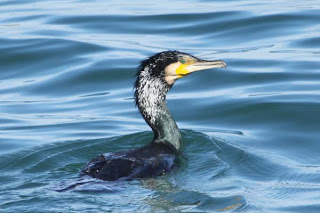 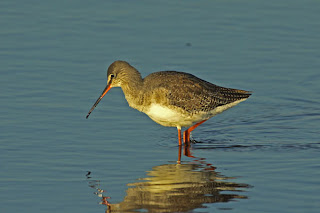 Spotted Redshank - seen only once during the week

So, how many species have we recorded in that time?  Well, in the Algarve we found 141 and in the Castro Verde area an additional eight, making a total of 149.  We didn’t set out to do it but it looks as though we proved our point!

We have no doubt that this is a ‘score’ that could be improved upon by anyone wanting to embark on a week-long bird race.  We didn’t plan to do that.  In fact, it’s only afterwards that we have counted up the species and made the comparison with our forecast.

As always, there were several species that we probably should have seen but didn’t.  Examples would be Little Tern (we didn’t go to the mouth of the Guadiana River), European Shag (not enough time spent on the cliffs at Cape St Vincent), Little Bittern (in spite of two visits to Quinta do Lago and one to Parque Ambiental de Vilamoura) and Firecrest (no excuse).  Conversely, we would not have predicted Long-tailed Duck, Red-knobbed Coot or Little Gull.

The full list of 149 species can be seen here.

Winter 'Big Day' in the Algarve

Which is the best time of the year to come birding in the Algarve?  It’s a question that we get asked from time to time but, of course, there’s no simple answer – it really depends on what you want to see.  If Bee-eaters, Golden Orioles and Collared Pratincoles are on your agenda, then you might be lucky in March but April, May and June would probably be the best months.  If raptor migration is what you’re hoping for, then September and October should be your choice and September would also be a good time to take a boat trip to look for shearwaters and storm-petrels. 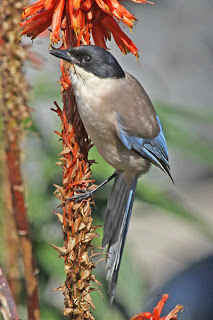 Surprisingly few birders come here during the winter months, which is a shame because they’re missing out on some really good birding.  We know that the weather can be an issue but it’s almost guaranteed to be better than it is in northern Europe.  Today it is cloudless and sunny with a forecast high temperature of 19ºC and that is typical of how it has been recently.  It’s very difficult to stay home and not go birding on days like this! 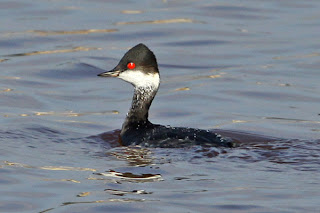 To demonstrate just how many bird species are here in the winter, we went out on 1st January 2009 and 2010 to see what we could find.  Anyone who has participated in such a ‘Big Day’ in the winter will know that it doesn’t always pay to travel long distances when daylight hours are relatively short.  Time spent in the car on the motorway is not likely to be very productive.  We restricted ourselves to visiting Ludo/Quinta do Lago, Castro Marim and Tavira/Santa Luzia and on each of those days we managed to find 106 species.  The following year we proved our point by also going to the Parque Ambiental de Vilamoura.  Only four days earlier we had seen four species of hirundines and some Penduline Tits there but on our ‘Big Day’ none of those birds were present and we simply wasted time by going there.  We finished the day having seen only 96 species. 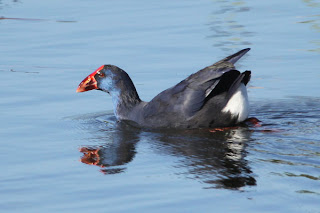 On 1st January 2012 we were in Arizona and this year we had already left the Algarve to start our trip to Colombia so we haven’t been able to continue the sequence.  However, we have just had quite a full day out, this one on 1st February.  This time we went only to Ludo/Quinta do Lago and to Tavira/Santa Luzia and the pace was quite relaxed; with the longer hours of daylight we easily managed to see 101 species.  There was time for us also to have gone to Castro Marim and had we done so it’s probable that we would have found at least another four or five species but on such days nothing is guaranteed; when we look at the final list there are always one or two species that it’s hard to imagine missing.  To illustrate the point, yesterday we saw Great Spotted Cuckoo, Short-eared Owl, Southern Grey Shrike, Lapwing, Mediterranean Gull and Pintail that we didn’t see the day before when we needed them!  And for some reason we haven’t been able to find a Linnet or a Jay for several days. 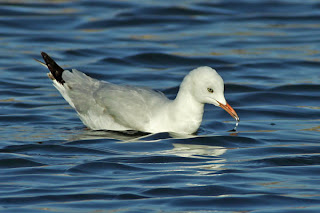 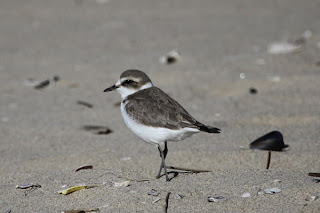 In a week here at this time of year it should be possible to see around 140 species, maybe a few more with a day trip to the Castro Verde area included.  There are some that are only likely to be found at the far western end of the Algarve (European Shag, Red-billed Chough) and others that are only here in the east such as Slender-billed Gull, so some travelling is necessary if you want to see them all. 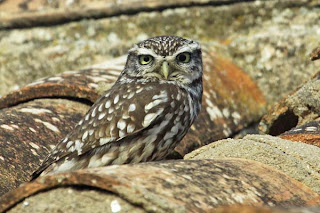 But it’s not just about the numbers of species; there are simply lots of birds here in the winter.  And if you’re a photographer, there is the promise of good lighting conditions.