Although the numbers of gulls and other birds wintering in the Algarve have now reduced considerably, we’ve still managed during the last couple of weeks to read several interesting colour-rings.

There are Greater Flamingos here all the time.  Rings that we have seen recently confirm what we already know about their origin - most come from colonies in Spain and France.  Two that we saw at Castro Marim had both been ringed in July 2009 in Spain, at Laguna de Fuente de Piedra, near Malaga; one of them we had seen before in Tavira in November 2010 and in the Santa Luzia saltpans in June 2011; the other had been seen several times at Lagoa dos Salgados and Ria de Alvor.

There are very few Mediterranean Gulls here now so it was pleasing to find one at Olhão that had a colour-ring.  It had been ringed in France in June 2013 at Barbâtre, Polder de Sebastopol, Vendée, a site from which we have had several other birds here in the past.

The same day, also at Olhão, there was a Lesser Black-backed Gull that had been ringed in July 2011 at Rauna, Farsund, Vest-Agder in Norway.  It seems that this bird has spent quite a lot of its life around the harbour in Málaga and in fact was there only a month or so ago. 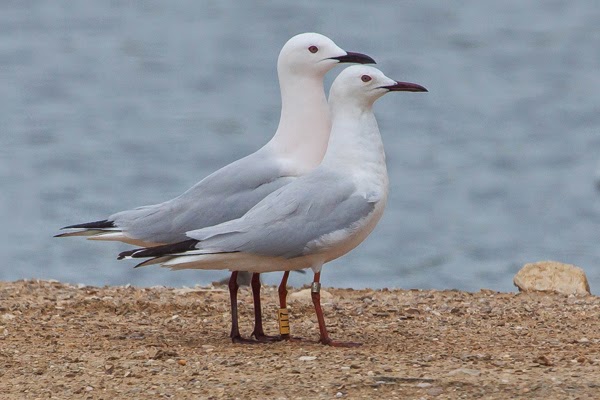 Most of the ringed Slender-billed Gulls that we see have originated in Spain, with the majority coming from Veta La Palma in the province of Sevilla.  One of last week’s birds was ringed in 2001, making it the oldest ringed bird of this species that we have seen. We have reported the ring details of countless Audouin’s Gull over the last few years and most have originated from the Ebro Delta in Spain.  However, increasingly we are seeing birds with blue rings which we know straightaway come from the colony on the Ilha da Barreta, here in the Algarve.  We have seen two of these recently in Tavira, both of them birds hatched in 2012.

Using a telescope, reading the numbers and letters on the rings of flamingos, gulls and Spoonbills is child’s play compared with sorting out the details of multiple colour-rings on small waders.  However, last Sunday, we managed to get photographs of two Sanderlings at Olhão that enabled them to be identified.  The photographs were taken from quite a distance using a Panasonic Lumix FZ100 and they were pretty poor but sufficient to ascertain that one of them had been ringed in Iceland in May 2011 and the other in Greenland in June 2010.  Both birds had been reported previously during the winter in the Olhão area and the Icelandic bird was also seen there in January 2012. 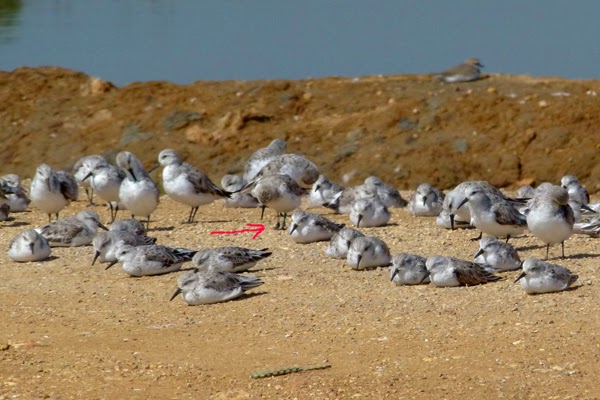 Finally, we were delighted to hear that Common Redshank H19 has made it back to The Netherlands after its (her) fourth winter in the Santa Luzia saltpans.  We hope that she will attract a mate this year!

At this time of year we are regular visitors to the plains around Castro Verde.  The area is simply full of birds, there are butterflies, there’s a wonderful display of wildflowers and there’s always a chance to see something else of interest, perhaps a snake, a lizard or maybe just an oil beetle.  Why wouldn’t we be up there as often as we can be? 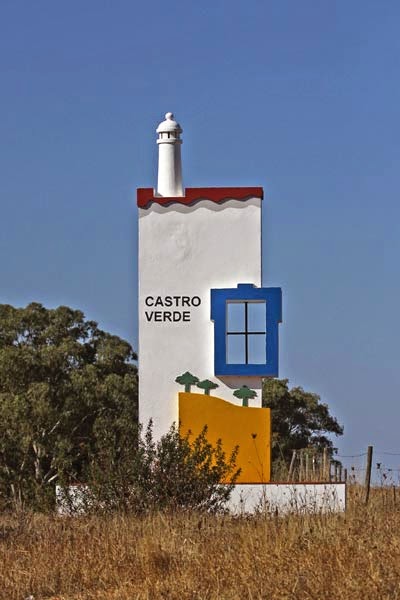 The weather for our latest trip yesterday was warm enough but mostly cloudy so the light wasn’t particularly good for photography.  However, without too much heat haze, conditions were good for looking at distant birds through a telescope and that’s important!  No matter how often we complain to Swarovski, the problem of heat haze doesn’t seem to be one that they are able to overcome!  Being out early in the day is usually the best remedy but yesterday visibility was reasonably good throughout.

When the males are displaying, both Great & Little Bustards are easy to find and fun to watch.  We saw lots of them!  However, the raptors are a different story!  Species such as Lesser Kestrel and Common Buzzard are hard to miss but others require a certain degree of luck.  We think the numerous Montagu’s Harriers themselves make the trip worthwhile but yesterday we ended the day having seen 13 raptor species, which may not be any sort of record but is still fairly impressive. 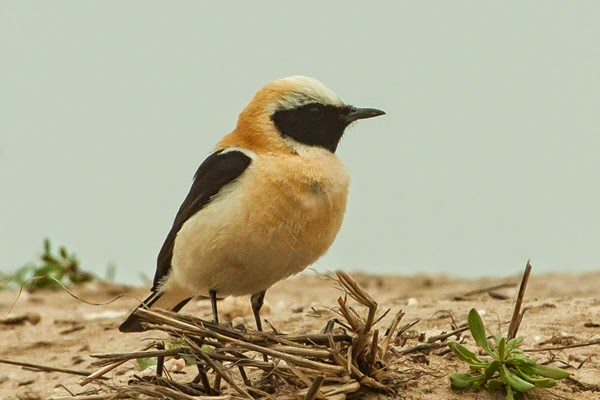 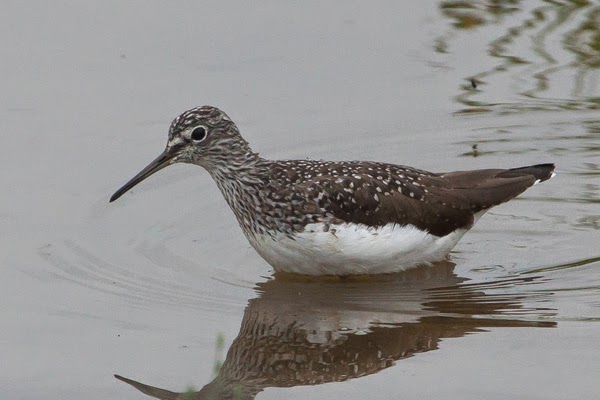 Amongst the day’s other highlights were Black-bellied Sandgrouse, European Roller, Great Spotted Cuckoo, Calandra Lark, Black-eared Wheatear, Golden Oriole, Purple Heron, Stone-curlew, Blue Rock Thrush and a spiffy Green Sandpiper that was our latest ever in the spring.  We saw 75 species in total during a fairly relaxed day.  We can’t wait to go again!

Longer hours of daylight, better weather and lots of migrants arriving - it’s a combination that doesn’t allow much time for blogging!  It’s hard to remember when we last had a day without birding and currently there seems time only to deal with essentials.

However, it would be remiss of us not to record here the recent addition of a new species to the Portuguese avifauna, even if we didn’t actually see the bird ourselves.

Last week there was a very noticeable influx of European Bee-eaters and on Friday, 4th April, we had a phone call to tell us that a Blue-cheeked Bee-eater had been found that morning close to the village of Piçarras, very near to Castro Verde.  It’s a species that we have been expecting would turn up here one day and we had even imagined finding one ourselves, perhaps at Castro Marim and probably amongst a newly arrived flock of its common cousins.  In the event, it was Daniel Pinheiro who found the bird, apparently with just half a dozen or so Europeans.  We were just left with the decision of whether we should make the 260km round trip in an attempt to see it. 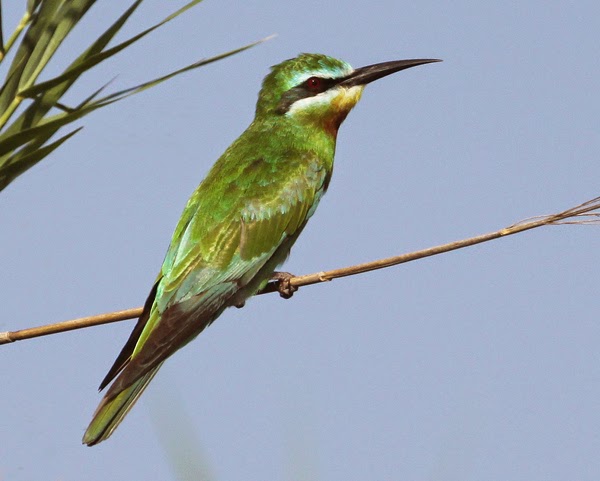 Blue-cheeked Bee-eaters breed in Asia and North Africa and migrate to spend the winter well south of the Sahara.  Birds from Morocco and Algeria migrate to West Africa, while those from Asia winter in East and Southern Africa.  Like many other long distance migrants, birds returning north in the spring occasionally overshoot and there have been many records in Europe, including Italy, Greece, Spain and even further north in the UK and Sweden.  A bird in Portugal was long overdue.

We have seen them on numerous occasions in at least seven different African countries and that was our starting point when deciding whether to try and see the bird here.  We were also aware that flocks of bee-eaters can be very mobile and suspected that our chances of success might be slim.  We also really couldn’t spare the time!  So, as with last year’s Caspian Tern in Staffordshire, we quickly decided not to go.

It was good to hear later that those few who did travel got their reward and that after quite a lot of effort the bird was even seen again the following day, not too far from the original location.  After that, who knows?  Maybe by now it has managed to find its way back to North Africa.

Meanwhile, we are still carefully scrutinising every flock of Bee-eaters that we come across.  Surely there’s no reason why there shouldn’t be another Blue-cheeked here somewhere!

As we all know, Corn Buntings, across their European range, show a clear pattern of microgeographic song variation.  However, the findings of a new paper just published (Riza & Ember, 2014) are still somewhat surprising. 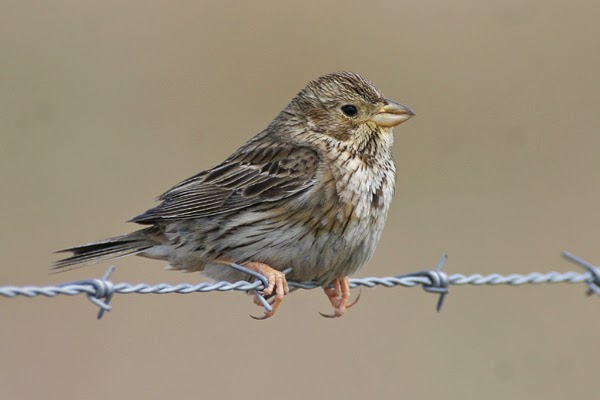 Corn Bunting is widely distributed across most of central Europe and it has long been recognised as variable with as many as six subspecies being proposed based not only on variation in its extremely complex song but also on very subtle variations in barring, colouration and morphometrics.  Extensive work has already been done on variations in its song and it seems that the ‘jangling keys’ description that we see repeated in so many field guides is an over-simplification brought about by the limited range of human hearing.  The reality is that there may be as many as six different bunches of keys!  These have now been distinguished in this latest study by measuring time and frequency characteristics with both univariate and multivariate analyses.  The results demonstrated significant differences in song characteristics among regions, and discriminant function analysis classified 80% of songs to the correct region. Divergence of song can occur rapidly and be of prime importance in causing reproductive isolation and speciation. 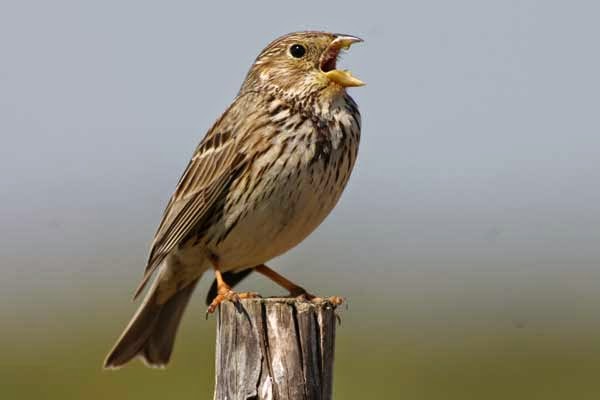 The authors propose that two species groups be recognised.  The northern group comprising two subspecies they name Wheat Bunting (Miliaria durumi), while the southern group made up of four subspecies retains the existing name Miliaria calandra but is re-named Barley Bunting, recalling the old Celtic name ‘fat bird of the barley’. 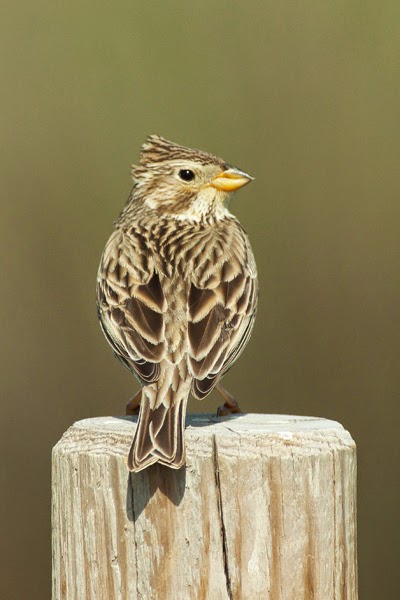 Riza and Ember, in their work examining contact zones between northern and southern divergent groups of birds travelled to the foothills of the Alps in Italy and began looking for locations where the northern and southern groups of Corn Buntings came into contact. In Piedmont, they discovered locations where the northern and southern forms co-existed, and began their work using sound, morphometrics, and genetic analysis to answer the vexing question of whether there was indeed more than one species.  Their aim was to discover whether there was a gradual change in traits (genetic, morphological, song, etc) as one would expect if there was gene flow between the two forms or whether the two forms overlap while maintaining their distinctive differences, indicating that they maintain reproductive isolation from one another. 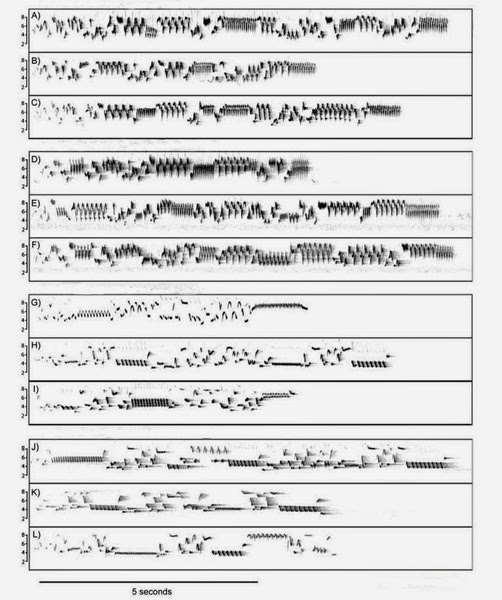 As well as their work on vocalisations, Riza and Ember also set out to examine functional relationships between the morphology of buntings and their behaviour. They found that Wheat Buntings have relatively longer feet than Barley Buntings, and they also have relatively long back claws and toes. This they thought may be related to the circumference of the birds’ favoured perches with power cables being more frequently used in the north while barbed wire is the more commonly used in the south.  Although the differences in size were statistically significant, they were not thought to be on a scale that would affect either species’ ability to sit on a fence post for long periods.  It was noted that song flights with dangling legs were common to both species in spite of the size differences noted in their feet but that the song flights of Barley Buntings were of longer duration, probably because they have wings of higher aspect ratio than Wheat Buntings, and they also have a lower wing loading. 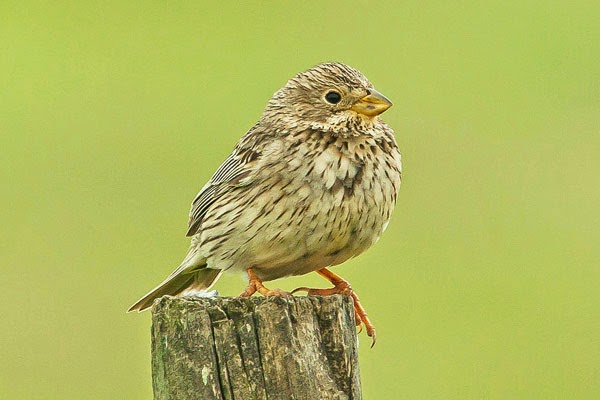 Their conclusions are now published and once again we find ourselves totally amazed by a split of a species we thought we knew well.  We recommend that you try to read the paper in full for yourself.