We’ve recently returned from a two-week birding trip to Thailand.  Over the years our travels have taken us to quite a number of countries in Europe, Africa and the Americas but we have had little experience in Asia; for June just one visit to Taiwan in 2006 and for Peter it was China in 2013.  So when we were invited by friends, Graham & Chris Weston to join them on this trip we jumped at the chance.

We prefer, when we can, to fly out of the UK from Birmingham and so we chose flights to Bangkok with Emirates via Dubai. We’re sure that a great many people who currently have little choice other than to fly out of Heathrow would elect to use a regional airport instead if appropriate flights were available. Certainly, we hate the inconvenience of early morning flights from Heathrow.

Departure from Birmingham was at 8.15am on Saturday.  Flying time to Dubai was just short of seven hours; after a three-hour layover there the onward flight was another six hours.  When we arrived in Bangkok the local time was 7.30am on Sunday. The Airbus A380-800 is probably the most comfortable aircraft we’ve been on and while it would be an overstatement to say that we enjoyed the long flights it really wasn’t too bad a journey.

We were met at Suvarnabhumi International Airport by Neil Lawton who was to be our guide throughout our time in Thailand.  Neil spends roughly half of his year in Thailand and half in the UK where he is employed by Natural England as warden of Scolt Head Island National Nature Reserve in Norfolk. He and his wife, Pennapa, looked after us very well throughout the trip and were very good company.  They also took away any language difficulties we would otherwise have had.

January is part of what is known as the ‘cool season’ in Thailand.  Neil had said to bring a light waterproof jacket but that rain was unlikely.  Our internet research confirmed this forecast.  When we arrived, therefore, it was a bit disappointing to find that it was already raining.  More disappointing was that it continued to rain throughout Sunday and Monday and well into Tuesday.  It wasn’t just a bit of drizzle either.  It was the kind of serious rain that comes with a cyclone that further south in the country caused major flooding with loss of life.

Fortunately, after three days the weather improved and for the rest of the trip it was pretty reasonable with comfortable temperatures and no further rain.  There were days when we didn’t see much of the sun, which didn’t help the photographers amongst us, but after the awful start we were pleased to be drying out.

We spent the first three nights at Ban Bang Home Resort, just a two-hour drive from the airport.  It proved to be an excellent base from which to visit the coastal areas of Pak Thale and Laem Pak Bia.  Birding here around saltpans and mudflats in the pouring rain was actually much better than it might have been had we been in a different habitat such as forest.  Sure we had to contend with a lot of mud as well as the rain but the birds were mostly waders, gulls, herons, terns and other waterbirds and relatively unaffected by the weather.  Also, many of them were familiar species, easily identified if we took time to wipe dry our binoculars and telescopes!  For the most part cameras were left behind in the vehicle. 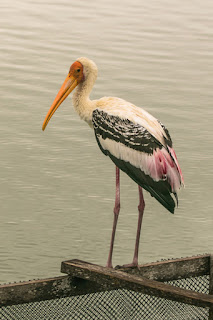 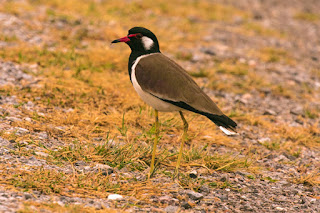 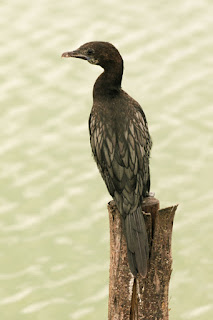 On the day of our arrival we managed to see more than 70 species.  Of these 28 were waders including Pacific Golden Plover, Asian Dowitcher, Red-necked & Long-toed Stints, Great Knot, Lesser & Greater Sand Plovers, Terek & Broad-billed Sandpipers and Red-wattled Lapwing, some of which were new for one or both of us.  On the second day we saw an additional seven wader species including Nordmann’s Greenshank and the all important Spoon-billed Sandpiper.  We do love saltpans!

Pak Thale is well known as a place to see Spoon-billed Sandpipers and before our departure from the UK we had been seeing reports of up to five of them there.  Classified by BirdLife International as Critically Endangered, Spoon-billed Sandpiper has a population estimated to be no more than 200 pairs that has been undergoing an extremely rapid decline. This is said to be the result of a number of factors, including habitat loss in its breeding, passage and wintering grounds. Disturbance, pollution, hunting and the effects of climate change are also implicated.  Considerable efforts are being made to try and save the Spoon-billed Sandpiper from extinction.  You can read about them here and perhaps make a donation. 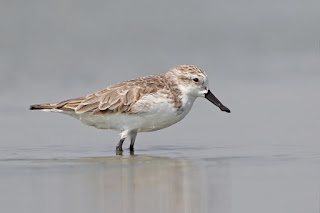 We took a boat trip to Laem Pak Bia sandspit, which on another day would probably have been a great experience.  As it was, it proved impossible to land the boat and we had to wade ashore. There were lots of gulls, waders and terns to see but in heavy rain and with a strong wind blowing it really wasn’t much fun. We stopped just long enough to identify Malaysian & White-faced Plovers and Chinese & Pacific Reef Egrets.  White-faced Plover is treated by most authorities as a subspecies of Kentish Plover but BirdLife International have now given it full species status and we suspect that others will follow.

In spite of the awful weather and the resultant lack of photographs, we couldn’t be too disappointed with our first few days in Thailand.  How could we be anything but delighted to have seen so many new birds and in particular that ‘Spoonie’? 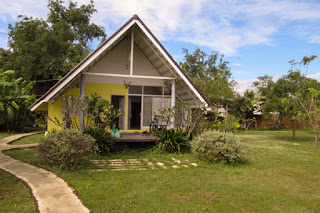 Our accommodation at Ban Bang Home Resort on the day we left with some blue sky for the first time!