Brazil - the Cerrado and Pantanal

We’ve just returned from leading an Avian Adventures tour in the Chapada dos Guimaraes and the Pantanal in Brazil.  It’s a country we’ve long wanted to visit and we’ve heard and read so much over the years about the Pantanal in particular that we were determined to see it firsthand.

We flew with British Airways from Heathrow to São Paulo and then on to Cuiabá the capital city of the state of Mato Grosso. From Cuiabá we went by road to the Pousada do Parque for a three-night stay in the Chapada dos Guimarães National Park.

Chapada dos Guimarães National Park is part of the Cerrado, one of the world’s most important savannas from the point of view of biodiversity.  It comprises dry woodlands, gallery forests and palm groves, rolling grasslands and dramatic rock formations with cascading waterfalls.  The Cerrado is Brazil’s most endangered ecosystem, more threatened even than the Amazon.  Already about 80% of it has been cleared for large-scale agriculture and very little of what remains is protected. 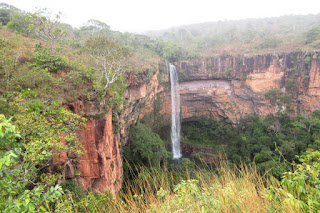 Unfortunately, our time in the Cerrado was badly affected by some unseasonal weather.  Cold, wet and windy wasn’t what we expected and one of our days there was an almost complete write-off in terms of birding.  However, we did see a good selection of species even if conditions weren’t always conducive to photography.  We also saw one of the ‘special’ mammal species that we had been hoping to find, a Brazilian Tapir – in fact, we saw three or perhaps four different individuals. 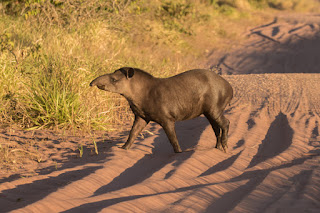 The birds included the tanagers, flycatchers, woodcreepers, antbirds, hummingbirds and various parrots, parakeets and macaws that one would expect in this part of the world. 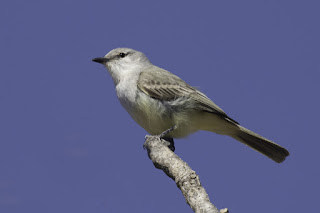 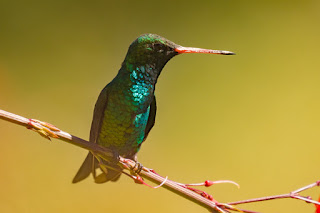 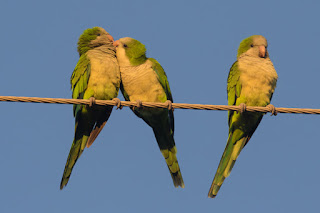 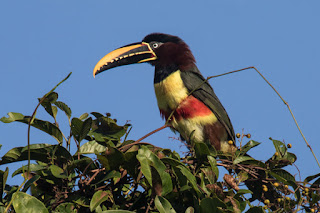 We moved on to the Pantanal with stays at Pouso Alegre, Porto Jofre and Pousada Piuval.  The Pantanal is the world's largest tropical wetland area. It is located mostly within the Brazilian state of Mato Grosso do Sul, but it extends into neighbouring Mato Grosso and also into Bolivia and Paraguay.  It sprawls over an area estimated at between 140,000 and 195,000 square kilometres and is reported to be home to about 1,000 bird species and 300 mammal species. 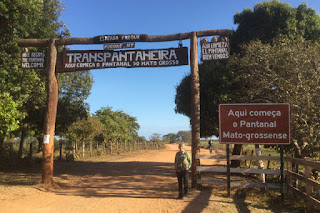 Gateway to the Pantanal, the start of the Transpantaneira

It goes without saying that in our short visit we barely scratched the surface but we did see a good selection of the most accessible birds and mammals.  Although we always say that our interest is primarily in the birds, many of the mammals here are truly remarkable and we were thrilled to see Giant Anteater, Giant River Otter, Jaguar, Marsh Deer and another Brazilian Tapir.

There were some fairly impressive birds, too.  The Hyacinth Macaw, for instance, is the largest flying parrot species and the Toco Toucan has a monstrous bill that relative to body size is the largest of all birds. 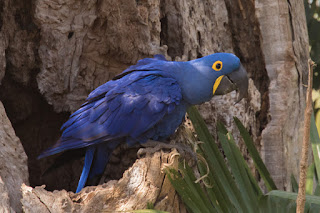 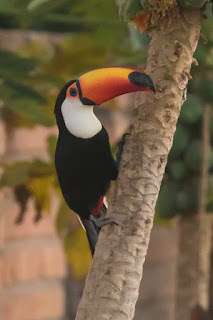 As to be expected in such a huge wetland, herons, ibises, kingfishers and storks were abundant and it was good to see Limpkins and Snail Kites again, two species that feed mostly on apple snails and are therefore often seen together. 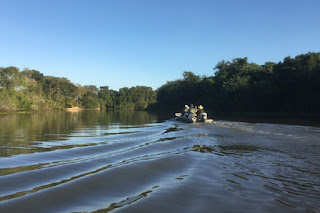 On the Rio Claro 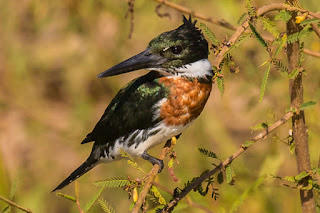 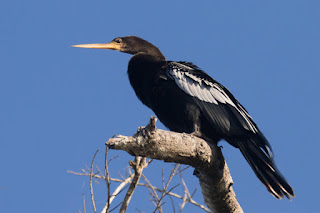 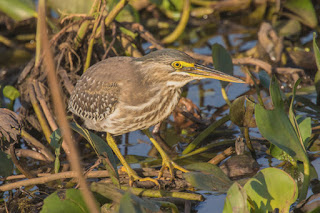 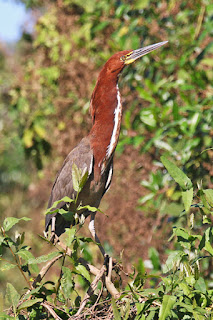 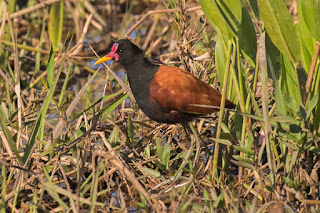 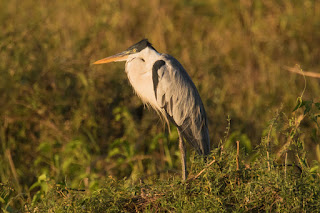 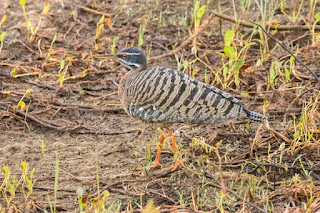 We enjoyed boat trips on the Rio Claro and the Rio Cuiabá and it was from a boat that we saw Jaguars, seven or maybe eight different individuals.  Amongst the world’s cats they are larger than anything other than Tigers and Lions and so impressive beasts. 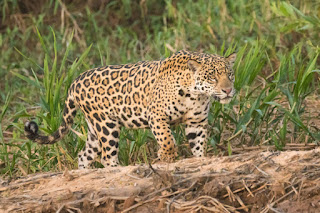 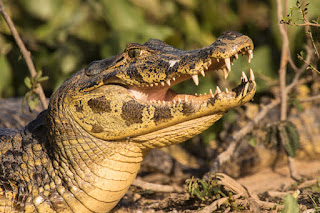 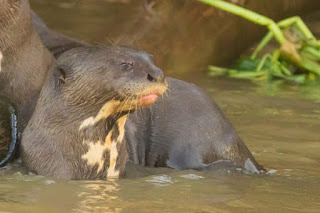 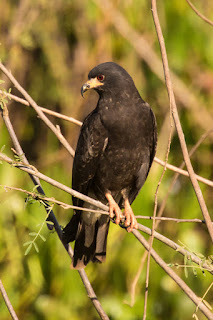 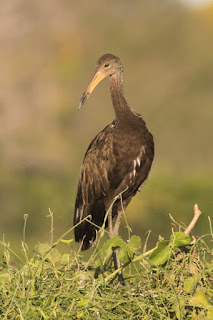 Not surprisingly it was also from a boat that we were able to watch Giant River Otters tucking in to a meal of catfish.  Capybaras were also seen mostly along the river banks.  Yacare Caimans were simply everywhere – it is said that 10 million of them exist in the Pantanal.  They can grow to a length of three metres! 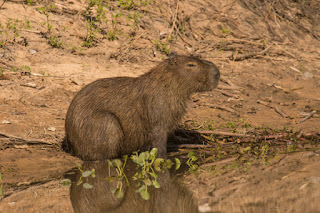 Also from a boat we saw a Sungrebe, related to the more familiar (to us) African Finfoot.  On sandbanks there were Large-billed & Yellow-billed Terns, Black Skimmers and Collared & Pied Plovers. 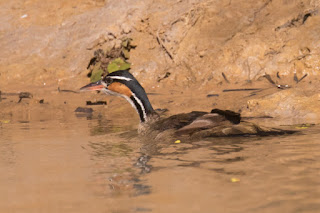 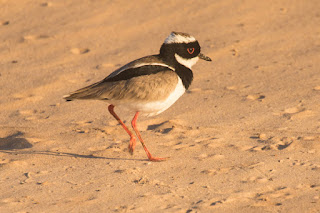 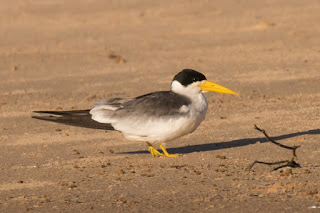 Perhaps the most surprising bird species we saw was an Orinoco Goose, a rare vagrant in this part of the world. 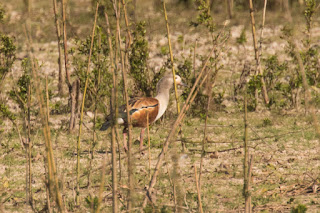 All in all it was a fabulous trip!