It’s the migration season, that time of the year when even more than usual we want to be out birding all day every day. So that’s what we’ve been doing and why it is there’s been no news from us for almost two weeks!

During that time, we’ve had two further visits to the Castro Verde area, a trip across the border to Doñana and multiple visits to the usual sites in the Algarve – Quinta do Lago, Ludo, Castro Marim, Tavira/Santa Luzia, Olhão and even Lagoa dos Salgados, somewhere that we don’t go all that frequently.

We’ve had no further luck with the crakes at Quinta do Lago and neither it seems has anyone else. There’s been one further report of a Little Crake there but no confirmation of the Baillon’s Crake reported on 22nd March. Interestingly, three further Baillon’s Crakes have been found further north in Portugal during the past couple of weeks and there’s been at least one in Spain. There was another Little Crake at Vilamoura on 2nd April and there have been at least three Spotted Crakes in the Algarve during the same period of easterly winds.

The weather that brought the crakes has also resulted in us having many more migrants than usual in the Algarve. Species such as Subalpine Warbler, Bonelli’s Warbler, Black-eared Wheatear, Common Redstart and Greater Short-toed Lark have all appeared in greater numbers than we normally expect and it has made for some exciting birding. 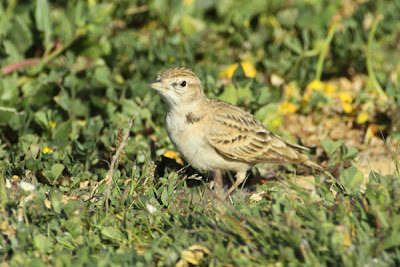 Greater Short-toed Lark
No further sightings of crakes at Quinta do Lago but it has been a great place to watch Little Bitterns. Black-headed Weavers have been busy building nests there and are always a talking point and Purple Swamp-hens can always be relied on for entertainment. Not far away, Glossy Ibis continue to be seen and we’ve heard a Savi’s Warbler singing on two or three occasions. The Barnacle Goose that we first saw back in October is still present and appears to be of the fulica race, making itself at home feeding on the golf course with the Coots! 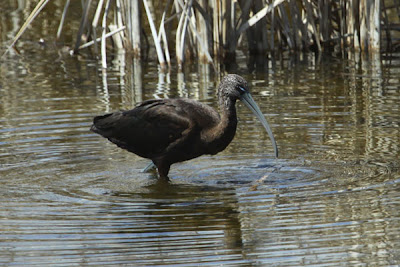 Glossy Ibis
When we’ve been to Quinta do Lago we’ve usually also spent time at nearby Ludo. The saltpans there haven’t been very productive but the raptors have been good with Booted Eagles, Black Kite, Montagu’s and Marsh Harriers, Common Buzzard, Peregrine Falcon and Osprey all seen there in the last week. A pair of Wrynecks (one of June’s favourites) also put on a good show for us one morning.

We still rate Castro Marim as the best birding site in the Algarve and spend quite a lot of time there. As well as regular birding there, we’re also helping with a survey of the breeding Lesser Short-toed Lark population. As usual with survey work, one of the side benefits has been that we have birded in areas that we don’t usually go to. Amongst the recent highlights at Castro Marim have been several pairs of Great Spotted Cuckoos, displaying Little Bustards, a Short-toed Eagle, Montagu’s Harriers, half a dozen Glossy Ibises, more than 50 Slender-billed Gulls and plenty of waders, including Spotted Redshanks and Curlew Sandpipers starting to show signs of breeding plumage and, yesterday, a Wood Sandpiper. 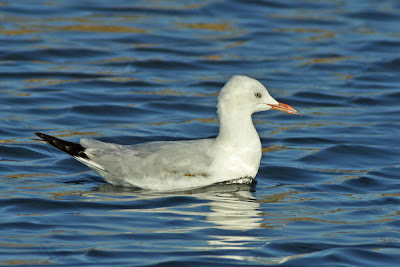 Slender-billed Gull
The woodland at Aldeia Nova is worth a quick visit when in the Castro Marim area and we have been rewarded there recently with Ferruginous Duck, Red-crested Pochards and Black-crowned Night Heron at the small pond and Bonelli’s Warbler in the pines.

The Castro Verde area has continued to provide us with excellent birding. Displaying Great Bustards and Little Bustards are the ‘crowd pleasers’ along with the Spanish Imperial Eagles and it’s great now to see so many Montagu’s Harriers and Lesser Kestrels. We’ve also enjoyed watching the song-flights of Calandra Larks. On our last visit we had great views of a flock of about 50 Black-bellied Sandgrouse, two Collared Pratincoles and the first Rollers of the year. 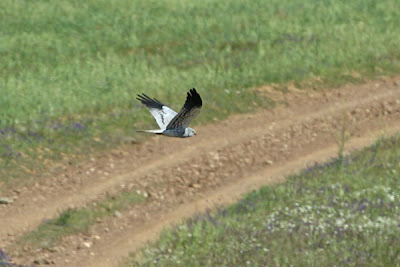 Montagu's Harrier
We also had good views of a Spanish Imperial Eagle when we were in Doñana but there the sandgrouse were of the Pin-tailed variety. Other highlights of our day there were 20+ Griffon Vultures, Short-toed Eagles, Purple Herons, Great Reed Warblers, Black-crowned Night Herons and countless Black Kites. It was disappointing to see how much the area seems to have suffered from the very dry winter; few egrets or Glossy Ibises appear to be nesting at the JAV Centre where they are usually such a feature. 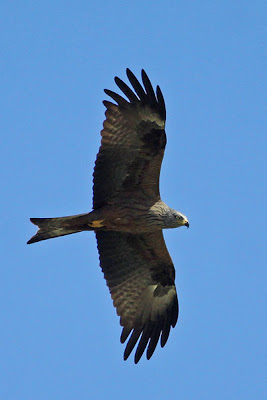 Black Kite
The soundtrack to the last two weeks has been the songs of Corn Buntings, Cetti’s Warblers, Serins, Nightingales and Zitting Cisticolas and the calls of Bee-eaters. We’re looking forward to adding Golden Oriole to that list very soon and we’re also listening out now for the return of Red-necked Nightjars. 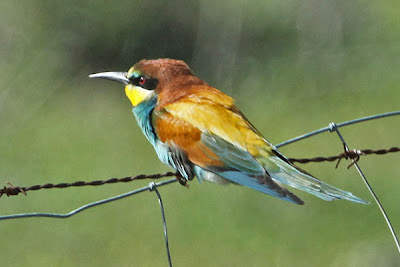 European Bee-eater
Posted by Peter and June at 16:17 No comments:

Crakes at Quinta do Lago

We were finally able to get to Quinta do Lago this morning to look for the Baillon’s/Little Crake(s) that have been reported there recently. 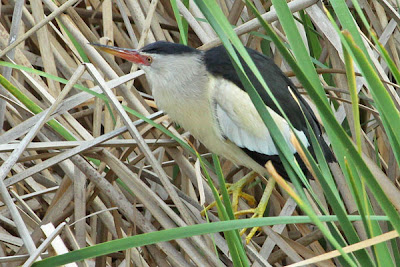 Little Bittern - part of this morning's sideshow
The Baillon’s Crake (Porzana pusilla) reported on 22nd March is a very rare species in Portugal with only three previous records, all of them back in the 1990s. There have been no further sightings of it as far as we know but at the same site on 27th and 28th March an equally rare Little Crake (P. parva) was seen and photographed. 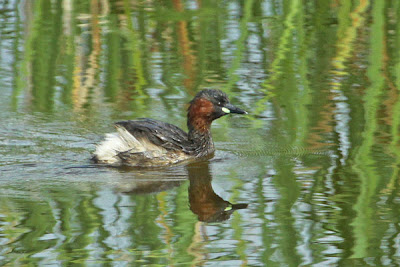 Little Grebe
Since then there has been no further news but plenty of debate! Was the first bird misidentified? Could two rare crakes have arrived at Quinta do Lago in the same week? It does sound unlikely and although the recent spell of weather predominated by easterly winds certainly makes it possible, most people seemed to be think that a mistake had been made. The fact that a Moustached Warbler (Acrocephalus melanopogon) was reported by the same observer at the same time as the Baillon’s, a time when several Sedge Warblers (A. schoenobaenus) were also present, was another factor that seemed to put doubt in people’s minds. Moustached Warbler is also an extreme rarity here. 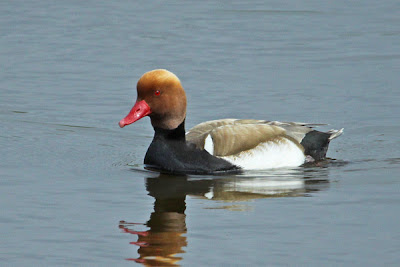 Red-crested Pochard
This morning was our first opportunity to go and see for ourselves. We arrived at Quinta Lago at about 7.45am and stayed there just about five hours. It would have been nice to include here lots of images of one or more crakes but that wasn’t to be and photographing Little Bitterns, Little Grebes, Red-crested Pochard and Purple Swamp-hens was all we managed. However, we did see crakes… 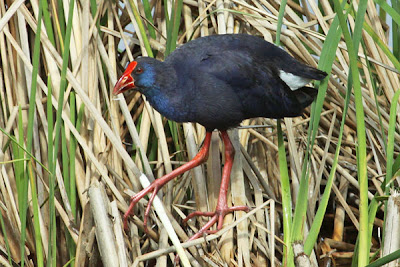 Purple Swamp-hen
At the edge of the reeds in the western corner of the lake we had multiple but very brief views of what we believe was a Little Crake. However, the time that elapsed between observations was such that we couldn't say with absolute certainty that only one bird was involved although we are inclined to think that was the case. We were unable to detect any barring on the bird that would have suggested identification as P. pusilla. 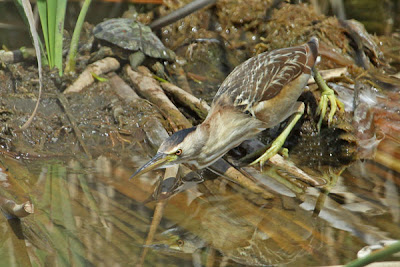 Little Bittern - again!
When we walked to the hide, about 100 metres away, we quickly had better views of what was definitely a Little Crake. We had several further views of this bird until it was last seen disappearing into vegetation straight out in front of the hide. Then, after an hour without seeing it again, we gave up and left. 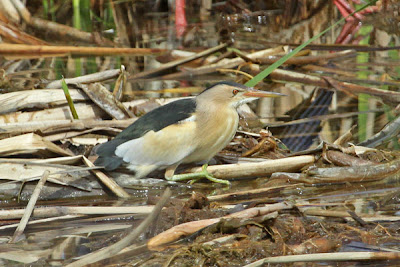 Little Bittern - hard to resist
We consider the morning to have been only a qualified success. One the one hand, we confirmed the presence of at least two birds but unfortunately we weren’t able to verify the record of a Baillon’s Crake which would have been a ‘lifer’ for June. We can’t, however, rule out the possibility of a Baillon’s having been there or indeed still being there and we hope other people will go and look - we will certainly be there again as soon as we can!
Posted by Peter and June at 18:06 1 comment: