What a busy week! Not only have we been to most of our favourite birding sites in the Algarve and twice visited the Baixo Alentejo, we also managed a trip across the border to Doñana.

And it hasn’t just been birds we’ve been looking at. Butterflies, dragonflies and reptiles have also been getting at least some of our attention.

Apart from the breeding Avocets, Black-winged Stilts, Kentish Plovers and Common Redshanks, quite a few wader species still remain on the local saltpans in small numbers: Ruddy Turnstones, Dunlin, Curlew Sandpipers and an occasional Greenshank, most of them in something close to full breeding plumage. 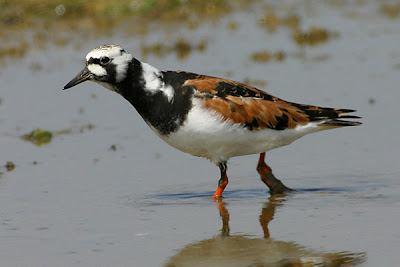 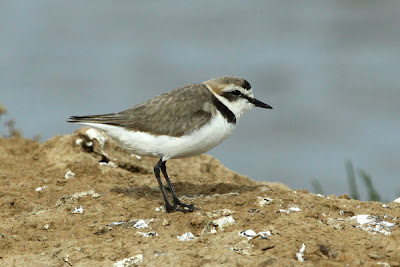 Kentish Plover
At Quinta do Lago and the Parque Ambiental de Vilamoura, several pairs of showy Black-headed Weavers are attracting lots of attention as they busily attend their nests. Purple Swamp-hens now have young and are equally popular. At the other end of the scale, a singing Savi’s Warbler is rather less obvious and almost impossible to see! 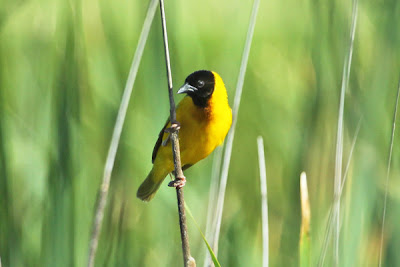 Black-headed Weaver
We’ve had two great days in the Castro Verde/Mértola area with most of the regular birds giving great views. Every day there is different – sometimes it’s the Rollers that put on a particularly good show, sometimes Griffon Vultures, Black Vultures, a Short-toed Eagle or any one of a dozen or more other raptor species will fly directly overhead, other times it might be a Calandra Lark that poses or, as on both occasions this week, young Great Spotted Cuckoos drawing our attention with their noisy begging calls. With Great Bustards, Little Bustards, Black-bellied Sandgrouse and many more special birds to look for, we are very happy to keep returning. 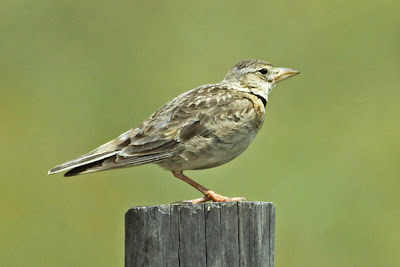 Calandra Lark
In Doñana we made our way first to the Dehesa de Abajo, situated adjacent to the vast rice producing area of Isla Mayor. The breeding colony of White Storks here is said to be one of the largest in Europe with perhaps 500 nests. Black Kites were also numerous but, surprisingly, the enormous lagoon here was almost birdless. Next we went to the José Antonio Valverde Visitor Centre where large numbers of breeding Glossy Ibis, herons and egrets are the main attraction and nearby we had a fairly distant view of what we like to call Iberian Imperial Eagle. 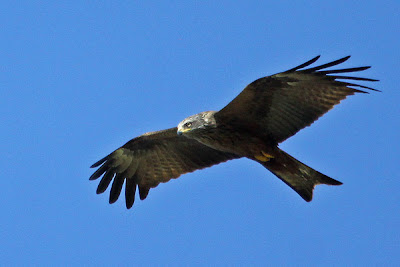 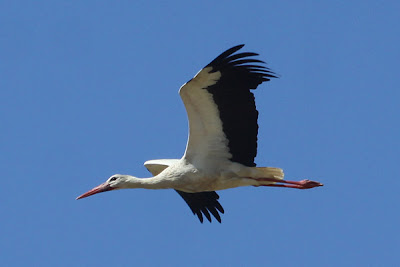 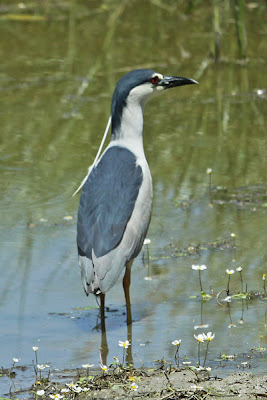 Large and easy to identify, Two-tailed Pasha, Cleopatra and Common Swallowtail are our kind of butterflies, more so than the blues, skippers and whites but when bird activity has died down in the heat of the day we have also taken an interest in these smaller ones. Two-tailed Pasha was a particular target this week, a species that apparently can be baited with fermenting fruit and alcohol. We found one around its favourite larval host-plant, Arbutus unedo, the Strawberry Tree. 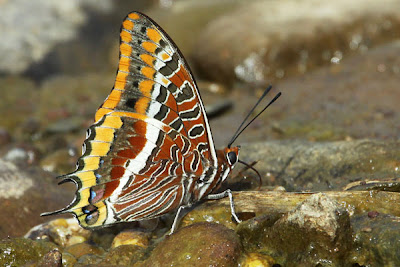 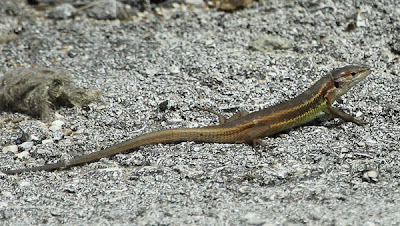 Large Psammodromus
We are keen to learn more about the reptiles here and are always pleased when we come across snakes and lizards that allow close inspection or at least a photograph from which we can identify them. This Large Psammodromus appeared while we were waiting for White-rumped Swifts to appear.

Other highlights of the week have included a quick look in at a Black-winged Kite nest site here in the Eastern Algarve, a visit to our local “Grey Egret” and an evening showing Red-necked Nightjars. 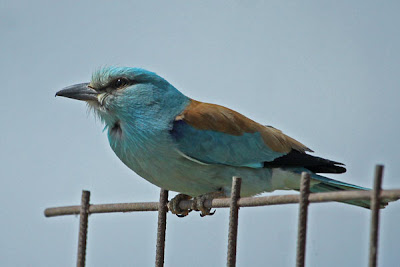 The European Roller is a species that is regularly on the ‘wanted list’ of birders visiting Portugal and it is one that we are always happy to try and show them. The total population here has been estimated at no more than 100-300 pairs but they are not so difficult to find...if you know where to start looking!

Unfortunately, Rollers are in decline, classified by BirdLife/IUCN as ‘Vulnerable’ in Europe and ‘Near Threatened’ globally. They are especially sensitive to changes in farming practices, including the resultant loss of habitat, and with a diet that consists mainly of large insects, small rodents and lizards, the widespread and increased use of pesticides has been a particular problem. They also, of course, face the usual hazards that affect all trans-Saharan migrants. 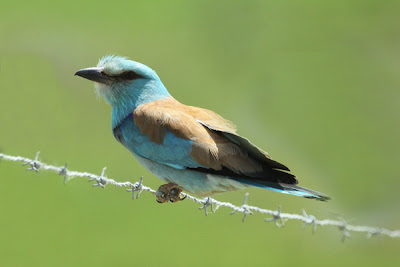 Rollers are popular not only with birders but also with farmers and landowners; it is a large (Jackdaw-sized), brightly-coloured bird that perches conspicuously and has a characteristic display flight that is not unlike that of a Northern Lapwing. They are simply nice birds to have around. 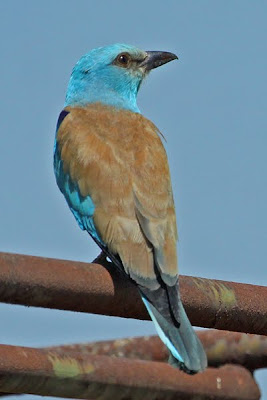 These are birds that nest in holes and cavities and among the steps being taken to help them is the provision of nest-boxes and other artificial sites. 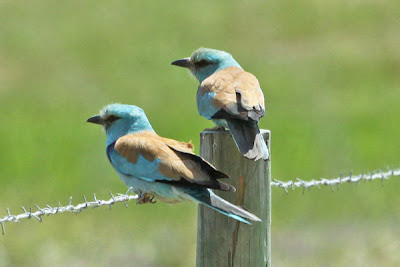 A Bit of Luck!

After three weeks away from the Algarve I was keen to catch up with the local Bee-eaters here in Tavira and try to get a few more photographs. 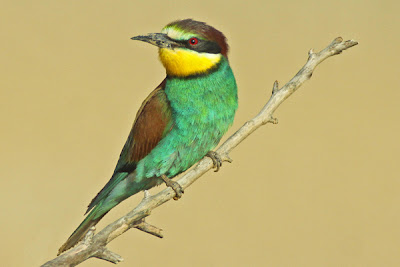 Sitting in the car for long periods when the temperature is above 27° isn't everyone's idea of fun but yesterday brought its reward! Not only did I get some Bee-eater photographs but I had almost unbelievable luck when an Osprey landed nearby complete with a fish! It didn't stay long but it was long enough to capture the moment in pixels and it was well worth the extreme discomfort. 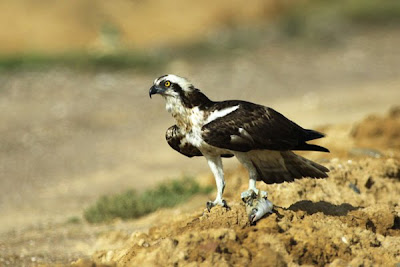 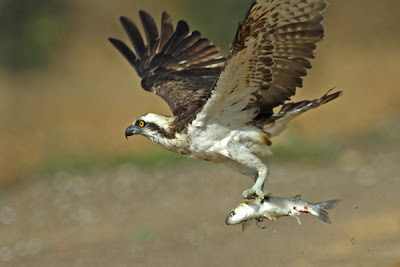 Mid-May seems very late for a migrant Osprey heading for Northern Europe. As far as we know, it's been quite a while since the species attempted to breed in Portugal but with Ospreys having re-colonised neighbouring Andalucia in recent years and breeding only about 80 km away from here, maybe we should expect to see more of them in the summer months. Perhaps we should think about providing them with a nesting platform here in the Algarve or ask one of the White Stork pairs at Castro Marim to move over.

Meanwhile, I'll thank those Bee-eaters to wipe the mud off their bills in future before coming to portrait sessions!
Posted by Peter and June at 20:40 1 comment:

In contrast to last year, the weather was mostly very warm and we found everywhere to be very dry after a winter with little rain. It was also quite windy on occasions. These are conditions that give rise to an extreme risk of fires and since my return there has been a major outbreak in the Chiricahuas which is affecting about 10,000 acres near Portal. It has threatened Cave Creek Canyon and quite a number of homes in the area have been evacuated. Currently, it is reported that the fire is 10% contained and that the Forest Service has 343 people fighting it. Up to date news of the fire can be found here.

As in 2006, our tour coincided with the passage through Arizona of thousands of Wilson’s Warblers heading north from Mexico and Central America to breed in Canada and the Pacific North-West. There were times, particularly along the San Pedro River, when we were almost in danger of stepping on them! Audubon’s (Yellow-rumped) Warblers were also numerous. 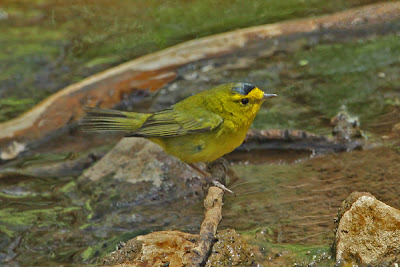 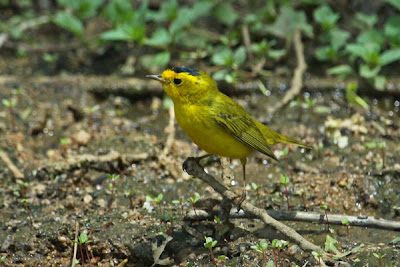 ...and another Wilson's Warbler 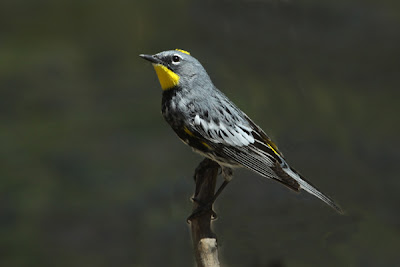 Audubon's Warbler
Empidonax flycatchers were abundant and gave us repeated identification challenges! With the popular field guides (Sibley, Kaufmann, National Geographic) saying that Cordilleran and Pacific-slope Flycatchers are identical in appearance and separable only by the call of the male, it is probably best to call them ‘Western’ Flycatchers, as they were before being split in 1989. There are many who still regard this as a ‘bad’ split and I can understand why! Dusky and Hammond’s Flycatchers probably are separate species but they, too, are very difficult to separate. 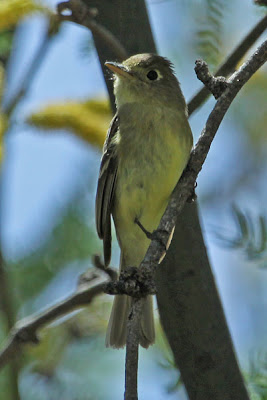 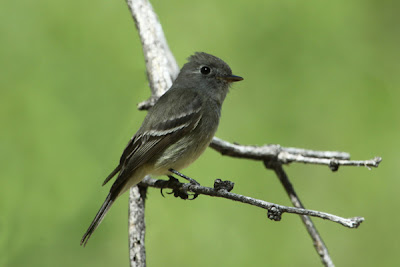 Hammond's Flycatcher - I think!!
Fortunately, there were also plenty of brightly-coloured and easily identifiable birds to see, which is what you want, particularly if, like some of our group, it’s your first visit to the USA. Not everyone on a birding tour wants to spend time agonising about the identity of lots of small, grey, brown or olive-green birds! So, Painted Redstart, Elegant Trogon, Hooded, Scott’s and Bullock’s Orioles and Western Tanagers were popular. 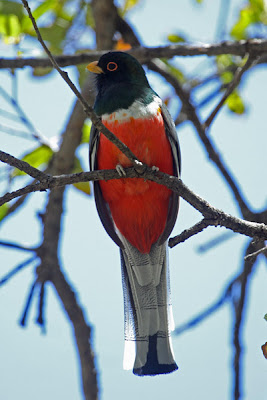 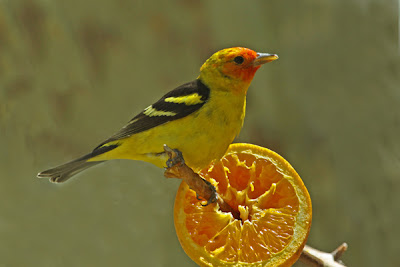 Western Tanager
Greater Roadrunner and California Condor were two of the ‘most-wanted’ species and although it would have been a major surprise if we hadn’t seen them, both took a little longer to present themselves than I would have liked. There are now reported to be 74 Condors living in the wild in Arizona and as a result of captive breeding, the total population has increased dramatically from 22 birds in 1987 (the brink of extinction) to 369 birds in 2011. 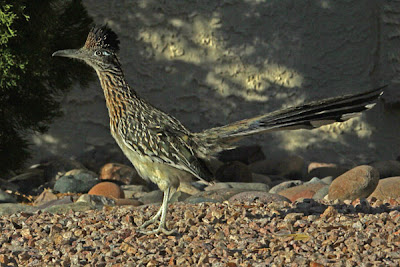 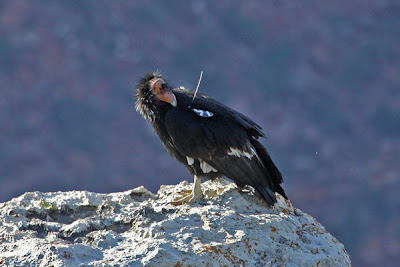 California Condor
Our total bird list fell just short of 200 species, about par for the course. As always, among my own personal favourites were the waders (shorebirds if you’re reading this in the USA). They included Willets, Wilson’s Phalaropes, American Avocets, Long-billed Dowitchers, Lesser Yellowlegs, Solitary Sandpipers and, of course, Killdeers. 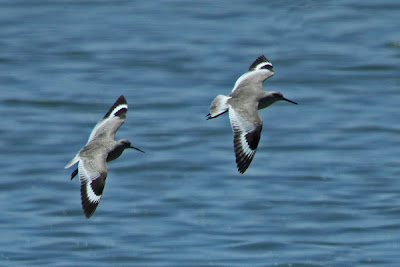 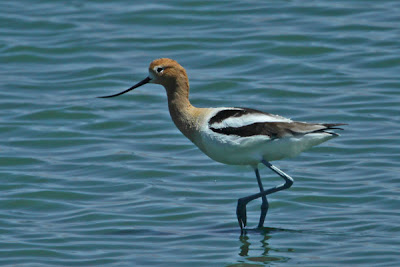 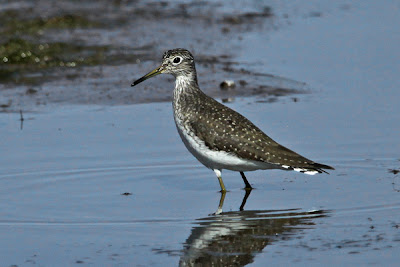 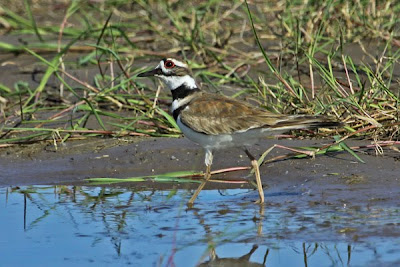 Killdeer
We are hoping to be back in Arizona (and California) at the end of the year when we lead the Avian Adventures Christmas tour across the deserts from San Diego to Tucson.
Posted by Peter and June at 20:11 No comments:

White-rumped Swifts breed in much of sub-Saharan Africa and we have seen then regularly when leading tours in Uganda and Tanzania and in South Africa, Botswana and Zimbabwe. They also now occur in Morocco and the Iberian peninsula; the first record for Portugal was in 1983 and the first confirmed breeding here was in 1995. 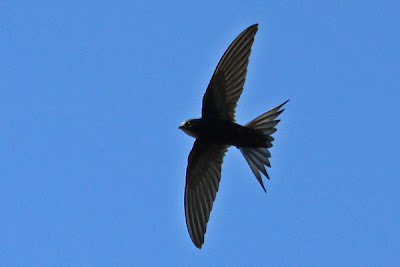 Although this is still a scarce breeding species in Portugal, it does seem to be well established. We know of only four breeding sites but there must surely be more and we hope to find time during the next few weeks to try and locate them.

Because of the birds’ comparative rarity in Portugal we have been reluctant in the past to take anyone to see them and have declined several requests. However, we know that other guides have taken a different view and perhaps this is understandable given that details of several breeding sites have now been published. Recently, the Portuguese Rarities Committee (Comité Português Raridades) removed White-rumped Swift from its list of species requiring approval.

Against this background we have decided this year that we will be open to requests to see White-rumped Swifts and, in fact, we have already in the last couple of weeks provided two clients with great views of these attractive little birds.

Attractive they may be, but they do take over the nests of other birds, not necessarily waiting until the original occupants have finished with them! In Africa, Little Swifts and Wire-tailed Swallows are among those who give up their nests; in Portugal, it is Red-rumped Swallows that are the victims. Red-rumps nest under bridges and culverts and on other man-made structures and they are quite common here. White-rumps therefore have plenty of nests to choose from and so it probably won’t be easy for us to find new sites.
Posted by Peter and June at 14:28 No comments: