We've just spent a week leading the Avian Adventures Christmas tour. In past years we have taken groups to Arizona & New Mexico, Texas, Cuba, Costa Rica and South Africa for Christmas birding but this year we had the people come to us in Portugal and we joined them, staying six nights in the excellent Vila Galé Albacora, located close to Tavira and just five minutes drive from home. 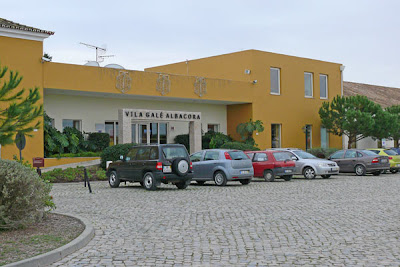 Hotel Vila Galé Albacora
The weather was kind to us more or less throughout. Although it was pouring with rain in Tavira on the morning of Christmas Day, we were able to change our plans and by driving out to Cape St Vincent managed to stay dry. Otherwise, it was a mixture of 'partly sunny' and 'partly cloudy' with a generally pleasant temperature.

Our programme for the week took us to all our favourite birding sites in the Algarve plus, of course, there was a trip into the Castro Verde area of the Baixo Alentejo.

Star birds of the week for us were the two Barnacle Geese seen less than a kilometre from the hotel on the Tavira saltpans. It seems that this was the first record of this species in the Algarve! Unfortunately, they were very skittish and quickly flew out of sight before there was any possibility of a photograph.

Also around Tavira we were able to find at least two Slender-billed Gulls, a male Hen Harrier, a Peregrine Falcon, almost 100 Stone-curlews and the usual selection of waders. The hybrid egret ('Hollywood Egret') at Santa Luzia performed well and we were also pleased to note the return of the similar garzetta x gularis hybrid at Forte do Rato, a bird we haven't seen for a while. 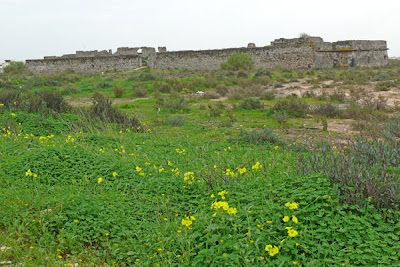 Forte do Rato - dates back to the 16th Century 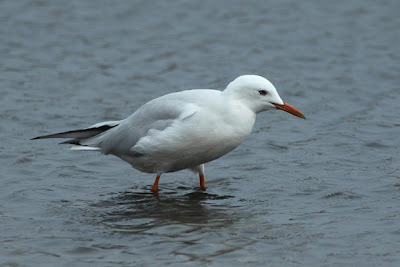 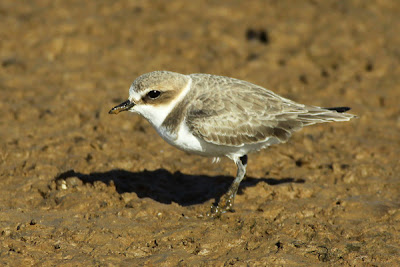 Kentish Plover
We had an excellent day in the Ludo/Quinta do Lago area where Booted Eagles, Black-winged Kites, Marsh Harriers, an Osprey and a Hen Harrier all appeared on cue and we had little difficulty in seeing Little Bittern, Glossy Ibis and Purple Swamp-hen. A Black-crowned Night Heron and two Sacred Ibises were seen in flight.

Amongst the most popular birds of the week were the Penduline Tits seen at Parque Ambiental de Vilamoura. There were also Booted Eagle, Marsh Harrier and Purple Swamp-hen there and all four hirundine species were feeding together over one of the lagoons - Barn Swallow, Red-rumped Swallow, Crag Martin and House Martin. The trees and bushes were full of Blackcaps, Robins, Blackbirds and Song Thrushes; there were Siskins and Serins feeding together in the conifers and two Black-necked Grebes on the ETAR. 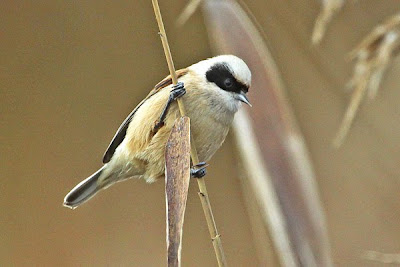 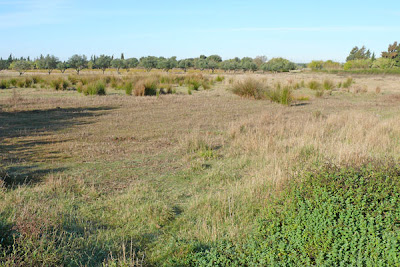 Parque Ambiental de Vilamoura
Our trip to Cape St Vincent produced one major surprise, a Great Bustard, the first we have seen in the Algarve. More to be expected here were Red-billed Choughs, Blue Rock Thrush, Rock Doves and Shag. Little Bustards were seen only in flight and at some distance.

At Lagoa dos Salgados there was relatively little water but plenty of birds - a nice selection of waders and ducks, plus Spoonbills, Purple Swamp-hen, hundreds of Black-headed Gulls and a couple of Bluethroats.

Castro Marim proved a little disappointing - the closing to birdwatchers of the Cerro do Bufo section of the reserve is undoubtedly a major blow to those of us who have been regular visitors there. However, we did get reasonable views of about 20 Little Bustards. Nearby, at the mouth of the Guadiana, we were able to find at least four Little Terns.

Our day around the Castro Verde area produced few surprises. We saw around 70 Great Bustards, mostly in flocks of about 15 or 20, there were lots of Red Kites, we found one good-sized flock of Calandra Larks, Cranes and Little Bustards were few but there were plenty of Black-bellied Sandgrouse. The highlight was seeing an adult Spanish Imperial Eagle on the ground with what appeared to be four immature birds of the same species.

All in all it was a satisfactory and very enjoyable week and hopefully we have sent 12 more people back to the UK to spread the word about how good the birding can be in the Algarve. 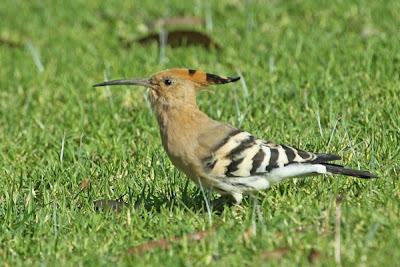 Hoopoe - always a crowd-pleaser
Posted by Peter and June at 17:17 No comments:

The warm and sunny weather continued until Thursday but since then we have had some heavy rain and it has been mostly cloudy.

We had a couple of days covering the usual sites around Tavira and Santa Luzia where a big female Peregrine Falcon was the only unusual bird seen. We used what turned out to be the last of the sunshine to photograph a Bar-tailed Godwit and some Lesser Black-backed Gulls. It’s very easy here to photograph Black-tailed Godwits but Barwits, being mainly coastal, are almost always viewed against the light and are a different proposition. The same is true of Oystercatcher, Curlew and Knot. They do come on to the saltpans at high tide but only rarely do they roost where we can get near enough for a photograph with the sun on them. This one was unusually obliging, feeding only a short distance from the road. 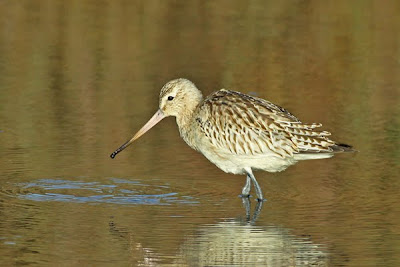 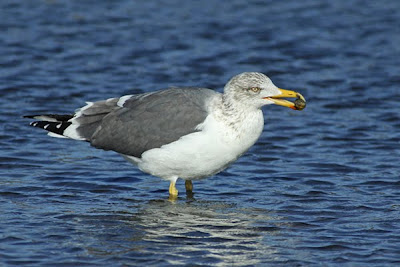 Lesser Black-backed Gull
On Sunday, in spite of the dismal weather and the fact that it was a hunting day, we took a trip to the Castro Verde area. Hunting is allowed here on Thursdays, Sundays and Public Holidays but we do wonder sometimes whether the locals have calendars! Anyway, the amount of shooting that we saw and heard on this occasion wasn’t enough to spoil our day, although it may have been sufficient to explain why we didn’t manage to find a single Little Bustard. Who could blame them for keeping their heads down? Happily, we did see plenty of Great Bustards and Black-bellied Sandgrouse and a good selection of raptors that included an immature Spanish Imperial Eagle and, more surprisingly, a Merlin. Lapwings and Golden Plovers were in their hundreds.

As we were driving back late in the afternoon we received a phone call from Thijs Valkenburg to tell us that he had just found a Long-billed Dowitcher on the saltpans at Olhão. There have been only a handful of records of this North American wader in Portugal and had we been at home we might have dropped everything and gone to look for it. As it was, we had no chance to get there in daylight.

So this morning at 10.30am we were at Olhão watching the Dowitcher. Even then it still didn’t seem like daylight but at least we got there before the rain started again. It almost goes without saying that we were on our own. There has been some discussion here recently about how we might improve the flow of news about rare and scarce birds and we support that. However, the fact is that there are still very few birders here and the record for the most people we have seen at a twitch in Portugal remains the 16 who came to Martinhal for the White-rumped Sandpiper in November last year. It seems likely to be a while before we are offered a Portuguese pager! 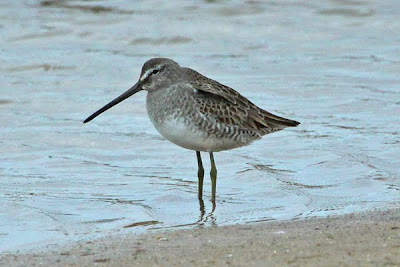 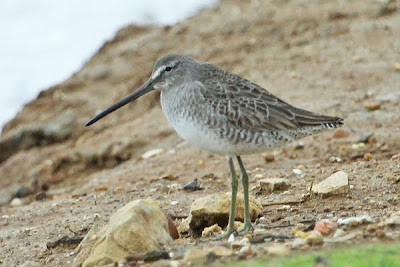 An accident, an emergency requiring a brief trip to the UK and the need to have some essential maintenance carried out on the car have all conspired to limit our birding during the last couple of weeks. We've been out and about around Tavira and Santa Luzia a few times but this morning at last we were fully back in action and headed off to Ludo and Quinta do Lago.

Of particular interest at Santa Luzia has been the presumed hybrid E. garzetta x gularis now so easy to see and photograph as it poses on fences and posts that we refer to it as 'Hollywood Egret'. It feeds regularly in the same channel and defends it against all comers. Photographs show clearly that it is the same bird that has been there for at least the last two years and we hope soon to be able to compare our images with those taken by Ray Tipper going back ten years. 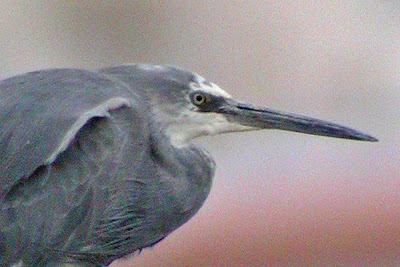 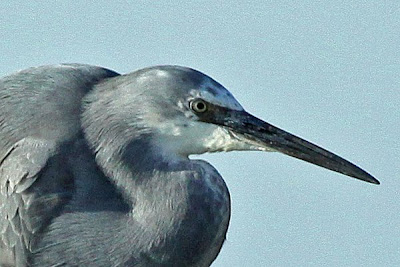 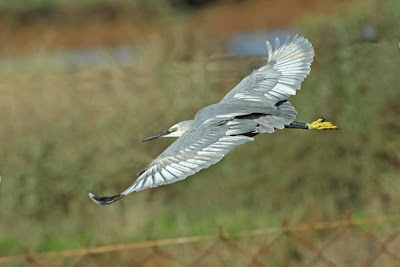 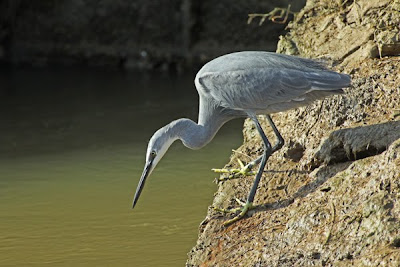 Another photo from last week.
This morning's visit to Ludo and Quinta do Lago was remarkable first of all for the amazing shorts and t-shirt weather - a clear sky and a temperature that reached at least 21° C . A total of more than 80 species included two Glossy Ibises, at least one Osprey, four or more Booted Eagles and two Black-winged Kites. We also saw one of the Sacred Ibises that seems to have made the Algarve its home, but for June the day's highlights were the three different Wrynecks that punctuated our walk. Together with several Great Spotted Woodpeckers and an Iberian Green Woodpecker they were enough to make the day for any 'piciphile' - and why not?
Posted by Peter and June at 17:58 2 comments:

A week of rather mixed weather has seen us staying mostly around the Tavira area, taking advantage of the sunny days (or more often half-days) to photograph some of the common birds. It's been exactly as forecast and we have been doing our best to dodge the showers. 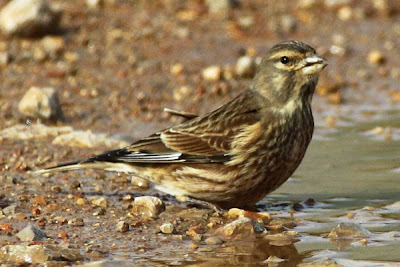 Linnet - seldom more than a few seconds at the water. 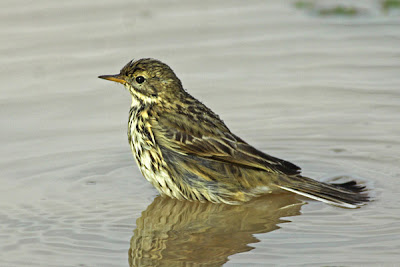 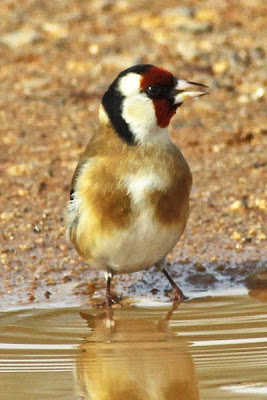 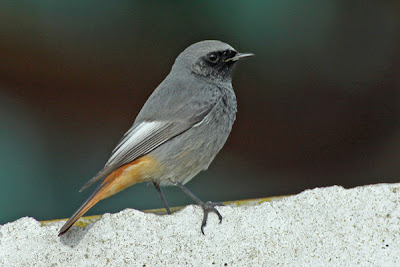 Black Redstart - a spiffy male but a shame about the white wall! 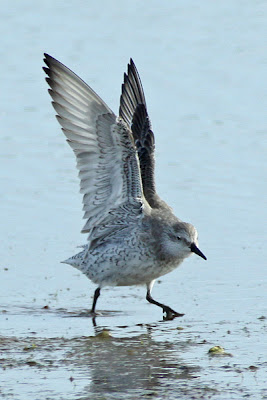 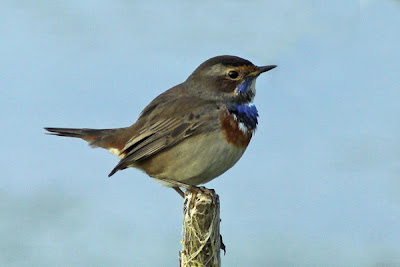 Bluethroat - this one scolding a cat that had intruded into its territory... 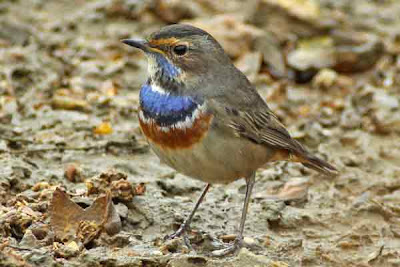 ...and now looking pleased to have seen it off! 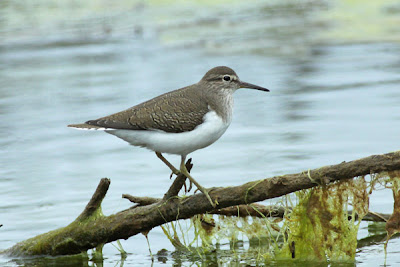 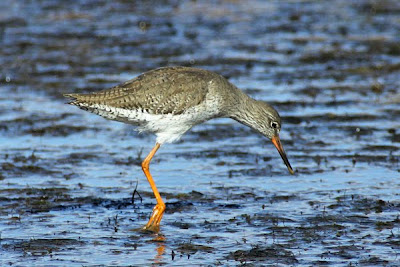 Common Redshank - waders often give the appearance of having only one leg; this bird does actually have only one, but seems to be managing OK. 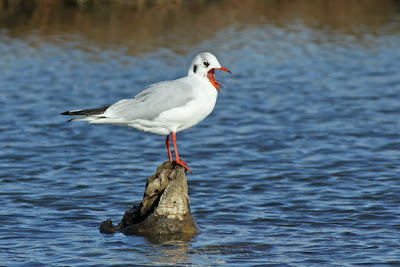 Black-headed Gull - not only caught with its mouth open but also with its tongue sticking out! 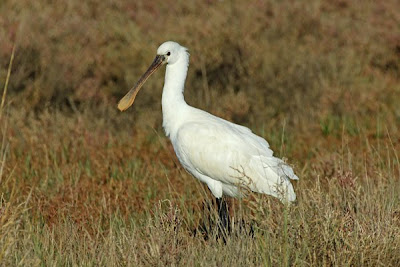 Eurasian Spoonbill - one of the 'rare' unringed birds. 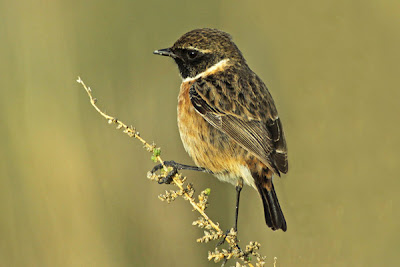 Common Stonechat - hard to resist when they perch like this one. 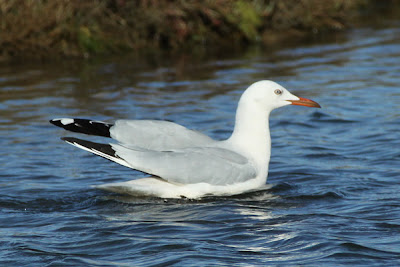 Slender-billed Gull - once considered a rarity in Portugal but can now be found here most days... 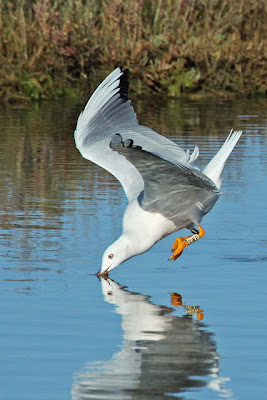 ...their distictive feeding action makes them easy to pick out.
Posted by Peter and June at 19:28 1 comment: