We spent last weekend at the British Birdwatching Fair, generally referred to as ‘The Birdfair’ or simply ‘Birdfair’.  It’s one of the highlights of our year and we would hate to miss it.

As always, we were part of the Avian Adventures team, there to promote the company’s programme of birdwatching and wildlife holidays, some of which we expect to be leading in the months ahead.  Of course, we were also there to talk about birdwatching in the Algarve. 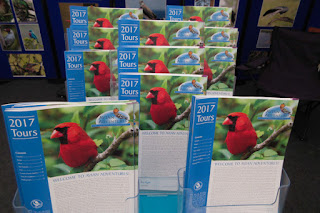 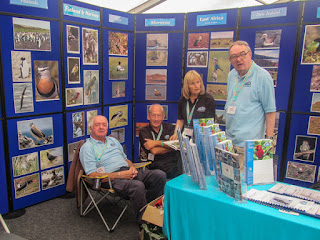 On the Avian Adventures stand with Ray Tipper and Gerry Griffiths

Birdfair is held at Rutland Water and is jointly organised by the Leicestershire & Rutland Wildlife Trust and the RSPB.  It encompasses the whole spectrum of the birdwatching industry whilst at the same time supporting global bird conservation. This is the event of the year if you’re into birds and wildlife.
One of the main attractions of the Birdfair is the opportunity it gives us to meet up with the countless friends we have made over the years through birding, many of them from overseas.

Birdfair has raised astonishing amounts of money for a wide range of conservation projects (£320,000 in 2015).  This year’s beneficiary will be the national NGO Asity Madagascar, BirdLife in Madagascar, which has been working since 2005 to save Tsitongambarika Forest.  This forest was the subject of the Birdfair mural painted by various artists who were exhibiting their work in the Art Marquee. 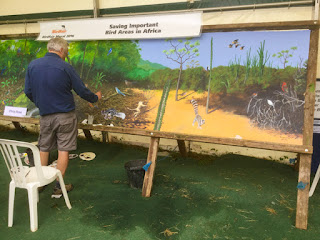 Birdfair can be a serious threat to the bank balance!  There are hundreds of stands selling the latest products for wildlife enthusiasts. From scopes to sculptures, binoculars to bird food, eGuides to eco-holidays, you can find almost anything you can think of.  Books tend to be Peter’s weakness, while June this year again came away with several items of clothing, mostly in her favourite colour – khaki! 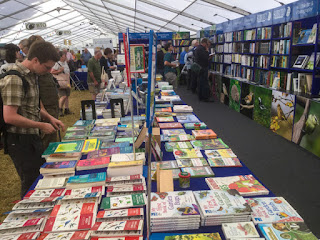 A brand new book that seemed to be particularly well-received was Britain’s Birds: An Identification Guide to the Birds of Britain and Ireland, published by WILDGuides.  We haven’t always been keen on photographic guides but this one really is good with lots of useful text on identification features and there are surprisingly few missing species that will affect its use in Portugal. 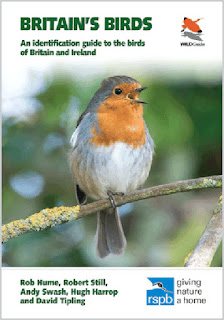 Chris Packham was just one of several television presenters who were there, some giving talks, some signing books.  Chris took part in a well-attended debate about the issue of Hen Harrier persecution associated with driven grouse shooting and was promoting the petition that it is hoped will result in getting this subject a debate in Parliament. 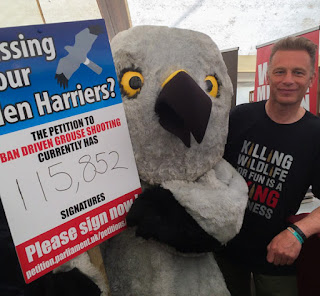 Because we’re usually too busy talking, we don’t manage to find much time at the Birdfair for actual birdwatching.  We did see a Great Egret while trying out a Swarovski telescope but we can’t wait now to get back to some proper birdwatching in the Algarve.
Posted by Peter and June at 13:18 1 comment: