The upriver experience is an essential part of visiting The Gambia. Not only did we see 70 or more bird species that probably wouldn't have been found at the coast but we also got away from the main tourist routes and saw something of the 'real Gambia'.
Day 7: The start of our upriver adventure was today's long and dusty drive to Tendaba Camp. Much needed improvements to long sections of the road are currently in progress but unless you've been before and remember how bad it used to be, you might not be impressed. We arrived at our destination with red dust covering everything and everybody! A stop on the way at some woodland near Pirang produced Green Hylia, Green Crombec and Yellowbill, none of them easy to find and all of them difficult to see. 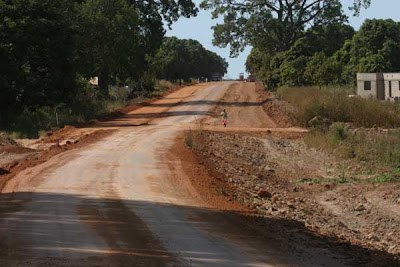 The Road to Tendaba
Tendaba Camp was built in the 1970s and hasn't really changed very much since then. Their slogan is “One million mosquitoes can't be wrong…..Tendaba Camp is fantastic!”. Fortunately, it was the dry season so we weren't able to find a mosquito with whom we could debate that description. 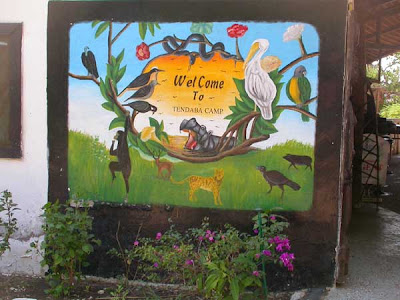 Welcome to Tendaba
Day 8: One of the reasons to stay at Tendaba Camp is the boat trip that we did this morning exploring the creeks across the river. The birding is terrific and it's always one of the highlights of any tour in The Gambia. Last time we took this trip, local guide, Wandi Touray, trying hard to make sure everyone saw a roosting Scops Owl hidden in the mangroves, slipped and fell from the boat into the river. He came to no harm but his binoculars were never the same again! Today we were pleased to give him a replacement pair donated by our friends at Focus Optics at Corley. He was delighted with them. And we were equally pleased with him when we had wonderful views of a female African Finfoot, just one of a long list of birds seen that included Goliath Heron and White-backed Night Heron. 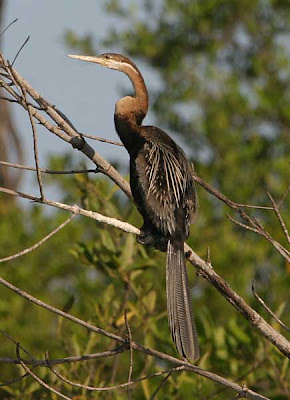 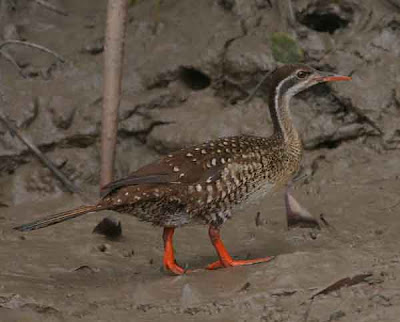 Day 9: Another travelling day as we headed further upriver for a two-night stay at Bird Safari Camp, located on MacCarthy Island, more usually referred to as Janjangbureh. Most of the journey was on a very good road along the north bank of the river but first we had to put up with a long stretch of pot-holes on the south side before taking the ferry that is part of the Trans-Gambia Highway linking the north of Senegal with the south. There was a long queue of mainly Senegalese trucks waiting to cross but in no time at all we somehow found ourselves well towards the front of this queue and sure enough we made it on to the next ferry crossing. It seems that it's just a matter of talking to the right person and offering the right incentive! Later, more than 100 bird species were recorded as we made a succession of stops at various wetlands on the north bank. They included the must-see species of this and every other tour in The Gambia, the striking and unmistakeable Egyptian Plover. What a relief! 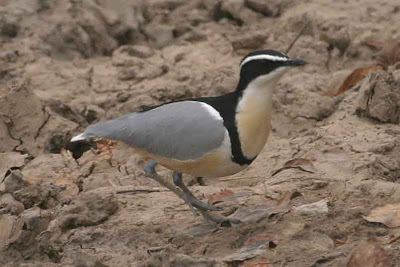 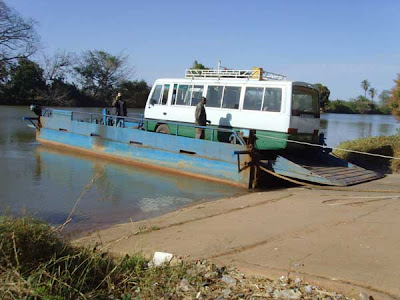 Day 10: Most of the morning was spent at a nesting colony of spectacular Red-throated Bee-eaters at Bansang, the afternoon at the ricefields at Jakhaly. Both sites are on the south bank of the river so there were more interesting ferry crossings. It was one of the hottest days of the tour, the temperature reaching about 35ºC. Again more than 100 bird species were seen, a total that included Lappet-faced among five species of vultures. Among the most memorable birds was the Exclamatory Paradise Whydah with a tail to match the length of its name.
On the way back to Janjangbureh we called at Brikamaba where, thankfully, two Verreaux's Eagle Owls were roosting exactly where they always roost. If all birds were as reliable as these, this guiding job would be a doddle! 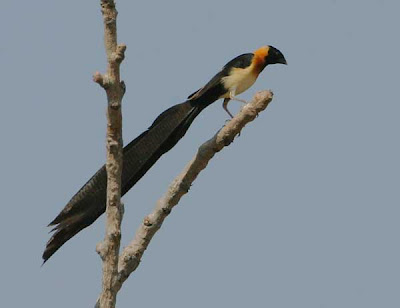 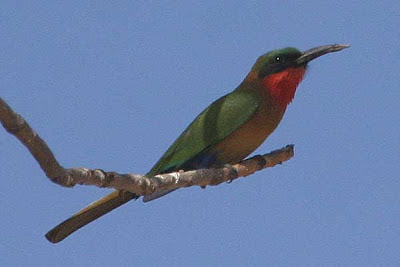 Day 11: After two nights at Bird Safari Camp we started the long journey back to the coast, returning first of all to Tendaba. Once again, in spite of the long distance covered, we saw lots of good birds including Spotted Thick-knees, found when we were actually searching for bustards. It was dark long before we reached our destination but that didn't mean we couldn't stop to look for owls and nightjars and there was also a huge Puff Adder on the road that caused us to pause for a while. 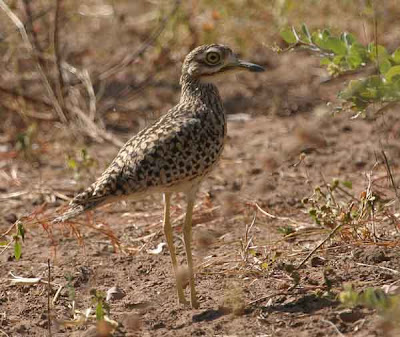 Day 12: Another hot, sunny morning was spent in nearby Kiang West National Park and Batelling Woods. During the afternoon we repeated the boat trip with Wandi hoping to see one or two species additional to the ones seen last time. Woolly-necked Storks fell into this category but more remarkable and unexpected in the mangroves were two Abyssinian Ground Hornbills.
After dinner our trip out to look for owls and nightjars proved something of a disappointment. We did get excellent views of African Scops Owl but where were all the nightjars? Reluctant to give up, we stayed out until after 11.00pm by which time not many in the bus were still awake! 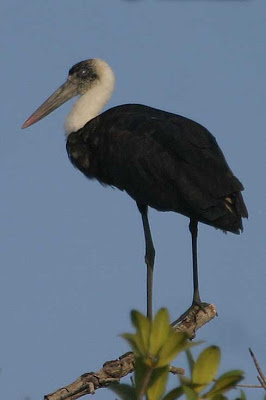 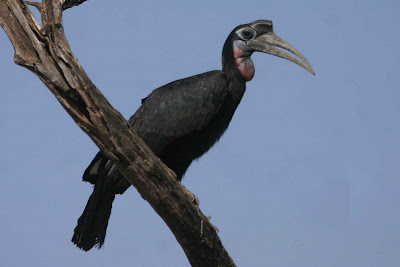 Day 13: We made the long trip back to the coast today with several birding stops on the way. We began near Wurokang where we had an excellent hour or so in woodland that was full of birds including White-shouldered Black Tit, Brown-rumped Bunting and a scarce Yellow-bellied Hyliota. Later, at Faraba Banta we met up with local guide, Abdoulaye, who had a roosting Greyish Eagle Owl to show us, a bird that we would never have found without his help. Bonuses here were a Bateleur and a pale-phase Booted Eagle.
Our last night in The Gambia was back at the Senegambia Beach Hotel where our first hot shower for a week was much appreciated by all!

Day 14: There was time for a return to Kotu this morning, ending the tour where it began, at the sewage ponds. A Little Grebe became the last new species of the tour and then it was lunch at the Paradise Beach Bar before afternoon flights returned us to the cold of the UK.

For our first week in The Gambia we were based at the Senegambia Beach Hotel at Kololi. There is plenty of good birding within easy reach and each day we went out to a different site.

Day 1: We always like to start a Gambia tour at the Kotu sewage ponds; it's not too far from the hotel, there are lots of birds and it has a certain ambience! Only one of the four ponds now has open water but enough to attract a few common and familiar waders, gulls and terns plus a few White-faced Whistling Ducks. It makes for a gentle start. From there we walked along the edge of the nearby creek and wetlands to see more waders, herons and egrets and then after lunch turned our attention to woodland birds at Tujereng. The total of 109 species recorded during the day was a pretty reasonable start. Among the highlights were Ayres's Hawk Eagle, Northern White-faced Owl and several species of dazzling sunbirds. 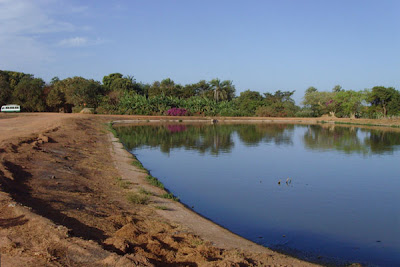 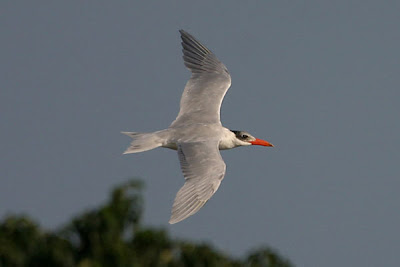 Day 2: Our destination this morning was Marakissa, about an hour's drive away. On the way we passed through Brikama, the second largest town in The Gambia (the largest is Serrekunda). We spent the morning in savannah woodland, birding under a clear blue sky but with a strong wind blowing that we could have done without. In the afternoon we were at a wetland near Darsalami. The day produced more than 90 species but the highlight was probably the enormous lunch served to us at Marakissa River Camp. The food on this trip was excellent throughout but this was an exceptional meal! 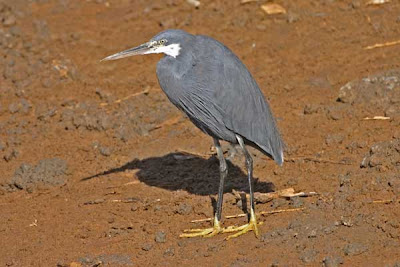 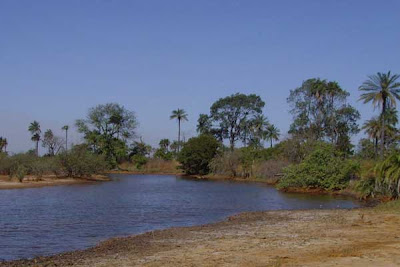 Day 3: We visited The Gambia's best-known and most-visited birding site, Abuko Nature Reserve. Although this is a still a great place to see birds, there is no doubt that it has been deteriorating for some years and Birdlife International have suggested that a lowering of the water-table is at least partly to blame. The reserve also looks as though it could do with some more active management. For several of the group the highlight of the afternoon walk across the nearby ricefields was seeing a Black Heron perform its 'umbrella' feeding routine. 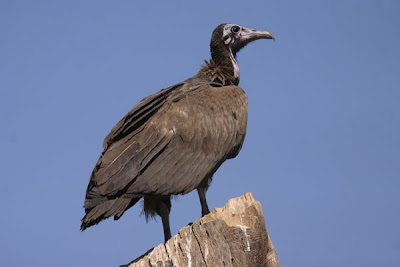 Day 4: Gulls, terns and waders dominated the day. In the morning we were at Tanji, The Gambia's largest fishing village, where there were hundreds of birds to search through. After lunch we drove to Banjul and made our way through the rather grim Half Die area (the name Half Die apparently dates back to an outbreak of cholera in 1869 which killed half the population) and picked our way through the garbage to a lagoon that is consistently the best site in the country for Greater Flamingo. There were also lots of waders and about 150 Slender-billed Gulls there. Later, we saw another 150 or so Slender-billeds further along the coast. The species total for the day was 110. 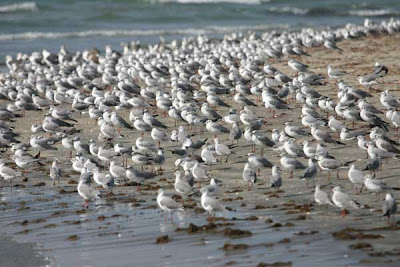 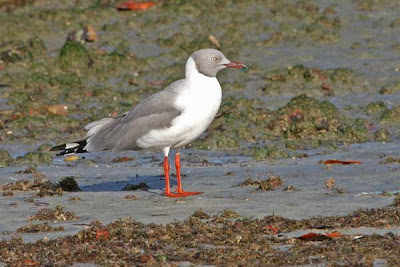 Day 5: We spent the first part of the morning at the former Scan-Gambia Shrimp Farm at Pirang. This site has the potential to be one of the best birding areas in the country if only it could be properly managed but for reasons known only to him, the present (Swedish) owner is not only refusing access to birders but seems to have spent the last two or three years turning it into something akin to a desert. We had to content ourselves with viewing from outside the fence and scanning across the area and all of the 'ponds' we could see were completely dry. Even so there were plenty of birds around with a Long-crested Eagle proving particularly popular. Later, visits to Faraba Banta bush track and Farasutu Forest made this another 100 species day with Black-faced Firefinches a definite highlight. 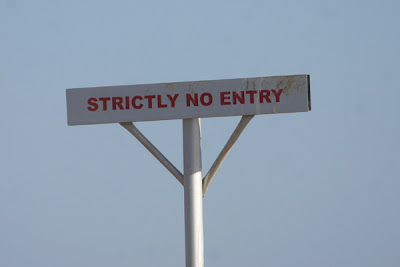 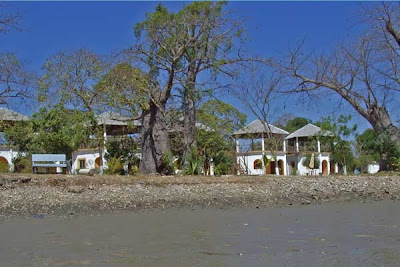 Day 6: After two days of much better weather, we returned today to quite cool and rather windy conditions resulting in comparatively poor birding but we still saw about 80 species. We were at Sangchumeh in the morning and Brufut in the afternoon. At last we saw a Pearl-spotted Owlet instead of just hearing imitations and recordings of its calls and we found a roosting Long-tailed Nightjar hidden in the leaf litter. 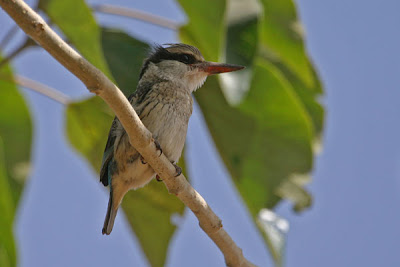 Information has now been received about two of the colour-ringed birds that we reported recently.

The Black-tailed Godwit seen in Tavira on Boxing Day 2008 was a male ringed as an adult in SW Iceland in April 2002. It was seen in the Netherlands and France in 2003 and there were more sightings in France in 2003, 2004 and 2005. However, it has clearly taken a liking to Tavira as this is its third consecutive winter on the saltpans on the edge of town.

The Eurasian Spoonbill that we reported from SW Spain in January was ringed as a nestling in the Netherlands in July 1994. There have been numerous sightings since then, mainly in France but it was seen in the Huelva area as long ago as 1996 and has been reported as a winter visitor there in 2003/04, 2004/05 and 2005/06.
Posted by Peter and June at 18:47 No comments:

Back Out of Africa

Just back from leading an Avian Adventures tour in The Gambia – Peter's 11th trip to Africa's smallest country.
The itinerary had us spending a week at the coast followed by six nights up river at Tendaba Camp and Bird Safari Camp. Sering Bojang was our local guide as usual. 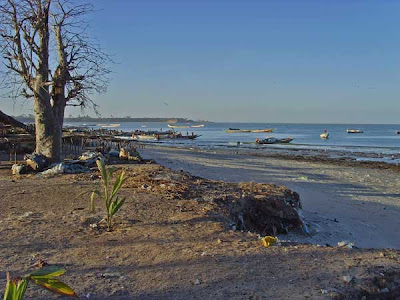 Tanji - for gulls, terns and waders

In spite of some strange weather that included several windy days and even a shower of rain, we managed to find 300 bird species, including (thankfully) the must-see Egyptian Plover. Other highlights were African Finfoot, Greyish Eagle Owl, six species of Vultures and eight species of Bee-eaters, plus Yellow-bellied Hyliota, Green Crombec, Green Hylia and Black-faced Firefinch, all of which can be difficult to see. 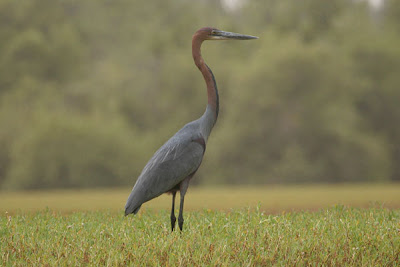 More details and photographs will follow shortly.
Posted by Peter and June at 14:58 No comments: