Having a light meal!

Although it couldn’t be described as common the Blue Rock Thrush is a widely distributed species in the Algarve and is usually not difficult to find.

It is perhaps mainly associated with the sea-cliffs and rocky coastline of the western Algarve but it also occurs elsewhere, breeding in steep-sided, rocky valleys, in quarries, on ruined buildings and on churches and other large, town-centre buildings. 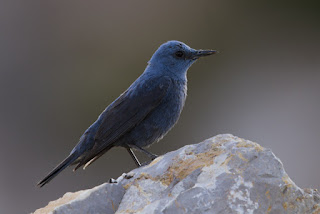 We have been watching several pairs in recent weeks around Tavira and further inland.  In March, we were even able to watch one from our kitchen window as it sang from the roof of a building across the road. 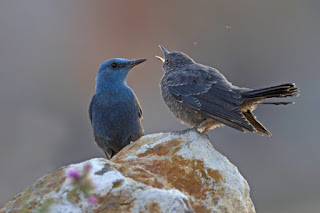 In the centre of Tavira a pair has been seen on the Church of Santa Maria do Castelo.  These birds have been notably inactive during the day but they come alive each evening at around 9.00pm (half an hour after sunset) when the floodlights that illuminate the church are switched on and immediately attract many moths and other flying insects, which are ready-meals for the thrushes.  Although this behaviour and feeding strategy doesn’t seem to have been previously documented for Blue Rock Thrushes, it is not, of course, unusual these days for birds’ lives to be affected by artificial light sources such as street lamps and floodlights, leading to extended feeding hours and for some species extended periods of singing. 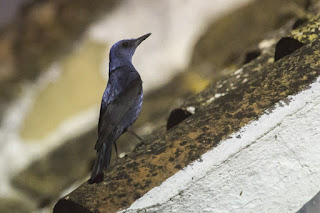 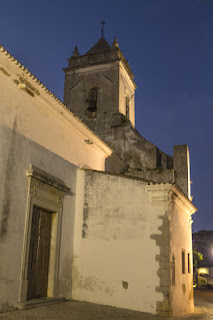 Church of Santa Maria do Castelo

Another species taking advantage of the abundance of insect prey at the church in Tavira is Red-necked Nightjar.  Twice this week we have seen a bird hawking insects from a high tree-top perch next to the church.  After each aerial sortie it returns to the same perch in the manner of a Spotted Flycatcher and it has used the same perch on successive evenings. 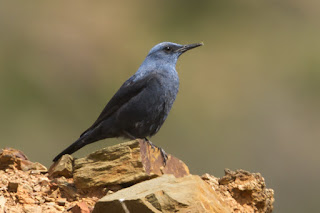 On a ruined building

The floodlighting at the church is clearly making life easier for the Blue Rock Thrushes and Red-necked Nightjars but spare a thought for the moths and other insects.  It has been estimated that up to 30% of insects attracted to such lighting die or are injured by colliding with a hot lamp surface or as a result of predation.  Artificial lighting can have several other negative impacts on a wide range of invertebrates including disrupting their feeding and breeding.  Developments in lighting technology have led to major increases in the distribution and intensity of artificial light in the past few decades and its growth is continuing largely unchecked.  When we consider why insect populations have been so severely reduced, impacting also on the populations of the bird species that feed on them, we tend to think (quite rightly) about pesticides but maybe artificial lighting is also an important contributory factor.

Thanks to Kenny Boyle for bringing the birds at the church to our attention.

What a great day!

It’s been baking hot here these past few days; August weather in the first half of May!  In spite of this we have enjoyed some really good birding.  As well as visiting Castro Marim and keeping an eye on the local Bee-eaters in Tavira, we’ve spent quite a bit of time in the Serra do Caldeirão, the hills north-west of here.   We have also made several visits to the Castro Verde area where the temperatures have generally been even higher than on the coast.  Early starts have been essential and we have been on the road before 6.00am almost every day.

Yesterday morning we were out with UK birders, Dave & Simon  We considered another trip to the Baixo Alentejo to look for a Rufous-tailed Scrub-robin and perhaps a White-rumped Swift but the prospect of again being out all day in such heat wasn’t attractive.  Instead we decided to stay near the coast and head for Quinta do Lago where our main targets were to be Black-headed Weaver and Iberian Green Woodpecker with Purple Swamp-hen and Little Bittern on the list of birds that would also be nice to see.  We thought that later in the morning we might go to the saltpans near Olhão in the hope of finding a Caspian Tern.  That would have to be around 11.30am to coincide with high tide.

By 8.00am the job at Quinta do Lago was done and just as we were wondering what to do and where to go next we received a message from Thijs Valkenburg.  It was to say that he had just found a female Red-footed Falcon, a rarity here in Portugal.  He was at the waste water treatment ponds (ETAR in Portuguese) between Olhão and Faro, not too far away from where we were.  He had just made our decision for us.  We jumped in the car and off we went. 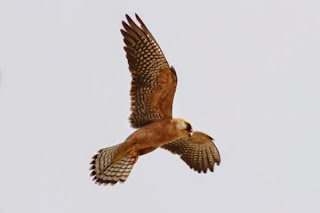 When we reached the ETAR, Thijs was just leaving.  He told us his story about the falcon and off we went to look for it.  He mentioned also having seen some migrant Common Redstarts, which we should look out for.  There were lots of other birds to see including a Spotted Flycatcher, several Mediterranean Gulls, about half a dozen Red-crested Pochards, a few Collared Pratincoles and about 20 Spoonbills but sure enough it wasn’t long before a Red-footed Falcon came into view.  However, this Red-footed Falcon was a male!  It was soon joined by a female and we watched the two of them feeding above the ETAR and neighbouring areas for quite some time.

We phoned Thijs to let him know that there were now two falcons but that was just the start!  Minutes later a bird flew over that we quickly identified as a Western Reef Egret.  It was heading towards Olhão; we made another call to Thijs who by now was already on his way back to join us. 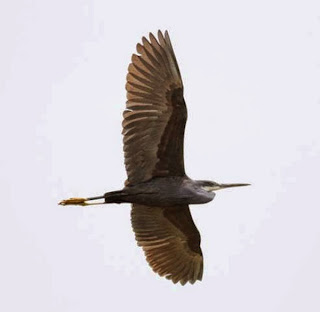 Before long, the egret re-appeared.  First it flew off to the west towards Faro but then it came back and landed and for a while we were able to watch it on the edge of one of the ponds.  However, all the time it looked distinctly unhappy, nervous and unsettled and after a few minutes it again flew off and out of sight.  By now we had noticed that each time it flew it was accompanied by what we at first thought was a Little Egret but which we now start to think may well have been a white-morph individual of its own species, another Western Reef Egret.

We now turned our attention to finding the Common Redstarts that Thijs had seen earlier.  He pointed us in the right direction and we began working our way along a line of conifers where we soon began to see not just Redstarts but both Spotted & Pied Flycatchers, a Garden Warbler, a Tree Pipit and, most exciting of all, a Wood Warbler, a real rarity here in Portugal! 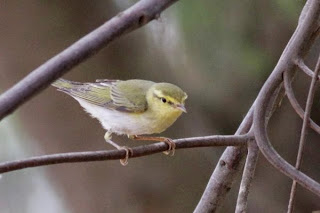 Eventually we dragged ourselves away from the ETAR and reverted to our original plan; we headed down the road to the nearby saltpans to look for a Caspian Tern.  Alas, we were unsuccessful, possibly because we were now much too late, having missed the high tide period when birds regularly roost here.  However, there was still plenty to see including a few Oystercatchers, small numbers of Dunlin, Sanderling, Curlew Sandpipers and Black-tailed Godwits, a Stone-curlew and about 50 Spoonbills so it wasn’t exactly a wasted journey!

From there we headed to Praia do Barril where the isolated stand of trees near the beach can sometimes act as a migrant trap and which seemed worth a look on a day when birds had obviously been on the move.  We were obviously now much later in the day than was ideal but we weren’t disappointed.  We managed to find a Spotted Flycatcher, a Common Redstart and a Melodious Warbler and perhaps more surprisingly a roosting Black-crowned Night-Heron.

After ice creams and drinks in Santa Luzia, we finished the day’s birding around Tavira where a Spotted Redshank was one of 20 wader species that we saw during the day.  The species total for the day was 92 and three of those (Red-footed Falcon, Western Reef Egret and Wood Warbler) were ones that we hadn’t seen before in Portugal.  What a great day indeed!

It isn’t often that we don’t have with us a camera of some sort to record the unusual but unfortunately this was one of those days!  Thanks, then to Thijs Valkenburg for the use of his images of the three rarities.  Thanks also for the very timely message that took us to the ETAR in the first place.

We learned later that there has been a remarkable influx of Red-footed Falcons into Portugal involving perhaps as many as 40 birds, most of them further north.
Posted by Peter and June at 17:11 No comments: