Regular readers will know that we are frequent visitors to the Baixo Alentejo.  We love birding around the Castro Verde area and have got to know it well over the years. 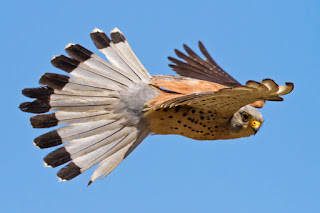 We are members of the Liga para a Protecção da Natureza (LPN) and often call in at their Environmental Education Centre at Vale Gonçalinho.  Recently we spent a morning there watching and photographing Lesser Kestrels and Rollers from one of the hides.  Using a hide in this way not only helps us obtain better photographs but importantly it avoids unnecessary disturbance to the birds, many of which were feeding young still in the nests. 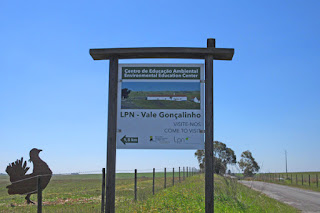 Lesser Kestrels and European Rollers are both species that suffered population declines in the second half of the last century.  However, there are indications now that population levels of both have at least stabilised. 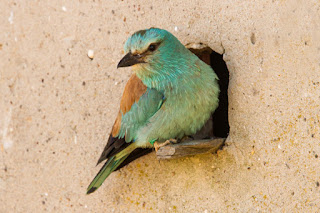 The main cause of declines has been habitat loss and degradation, primarily the result of agricultural intensification but also afforestation and urbanisation.  The replacement of grazed grasslands and dry cereal cultivation with vineyards and crops such as maize and sunflower has reduced the abundance and accessibility of the large insects, reptiles and small rodents that are their main food sources.  Pesticide use has also had a negative impact on prey populations. 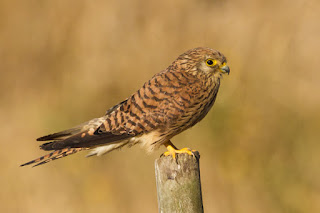 Thanks to the efforts of the LPN an extensive area around Castro Verde was designated in 1999 as a Special Protection Area (SPA) under the EU Habitats Directive.  In this SPA extensive agricultural practices predominate with cereals rotating with fallow lands, resulting in an annual mosaic of crops, ploughed lands, stubbles and fallow areas. The fallow areas are generally used as pasture for sheep and cattle.  There are also holm oak groves and olive plantations. 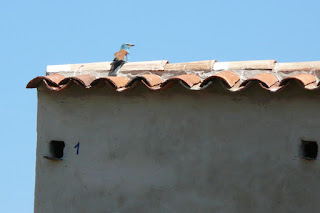 Loss of nest sites has also been an issue for Lesser Kestrels and Rollers and the LPN has addressed this by building a number of walls and towers, which are effectively nest-boxes.  These can be seen dotted around the area with two of them at Vale Gonçalinho.  Many of the farms in the area also have nest-boxes. 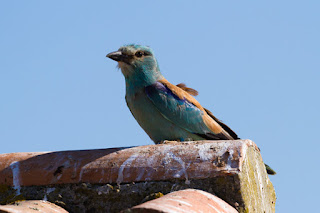 Lesser Kestrels can return to the Alentejo as early as February; Rollers arrive later, in early April.  Whether this puts the Rollers at a disadvantage when it comes to selecting a nest-site isn’t clear but what can be seen increasingly is that both species face competition from a growing population of Western Jackdaws.  Reducing slightly the dimensions of the entrance to each nest-box might help keep the Jackdaws out but may also prevent their use by Rollers.

Migratory birds are potentially more vulnerable to environmental change than sedentary species; they rely on different, widely-separated sites for breeding and for over-wintering and others in-between for ‘re-fuelling’ during their migration.  In the past we have been able to find out about their movements through ringing but in recent years much more information has come from the use of satellite transmitters and geo-locators.  We now know, for instance, that the Rollers from Iberia that carried geo-locators took a westerly route in the autumn along the coast of West Africa, avoiding as far as possible the Sahara Desert, and then had a stopover in Cameroon or Congo before continuing to Angola and Namibia.  What a journey! 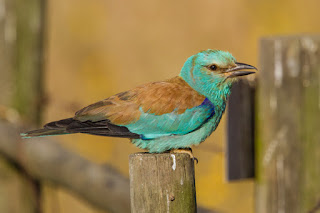 Although some Lesser Kestrels winter as far south even as South Africa, satellite-tracked birds from Spain went only as far as Senegal.  In January 2007, a single roost was found there containing an estimated 28,600 birds.  Imagine how many grasshoppers and locusts those birds were consuming and what the effect on the population would be if that food source disappeared for some reason. 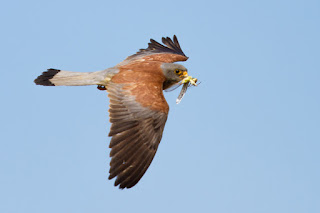 In addition to Rollers and Lesser Kestrels, the Castro Verde SPA is home to Great & Little Bustards, Black-bellied Sandgrouse, Calandra Larks and many more species including numerous raptors such as Spanish Imperial Eagle and Montagu’s Harrier.  In late October, Common Cranes come from the north to spend the winter and flocks of Lapwings, Golden Plovers and Skylarks arrive.

Just writing about it makes us want to be there!
Posted by Peter and June at 21:52 1 comment: