When we were preparing for our trip to Thailand we were made aware by Neil Lawton of some photographic hides near Keang Krachan National Park that might be included in our itinerary.

The story was that during the dry season poachers had been attracting wildlife, (mainly birds and mammals) to a series of small water holes that they had created along dry stream beds. Species such as Green-legged Partridge, Chinese Francolin and Lesser Mouse Deer were being shot and taken for eating; White-rumped Shamas, Lesser Necklaced Laughingthrushes and others were being trapped and sold in the markets as song birds.  The poachers also left food such as papaya and bananas by the water and simply returned each day to replenish the water and food as necessary.  They could then sit in a makeshift hide nearby and harvest whatever species they could attract. 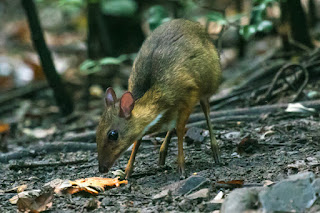 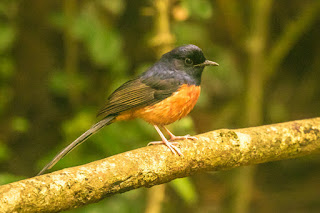 Thankfully, with the help of the Thai military on whose land this activity was taking place, these poachers were eventually persuaded that there might be more money to be made from their water holes if the killing and trapping stopped and if the hides were instead rented out to photographers. This all happened several years ago and we were told that poaching in the area has been brought to an end as the hides have now become very popular and have to be booked in advance.  Not only that but the water holes were attracting a surprising variety of species including some difficult to see birds, such as Red-legged Crake, which as a result have been found to be more common than previously thought.  All in all it's been quite a success story and one that might be repeated elsewhere. 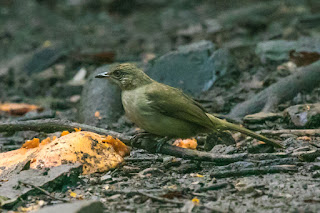 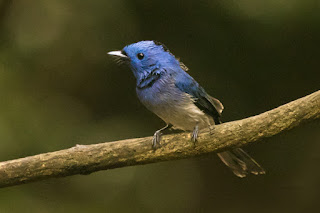 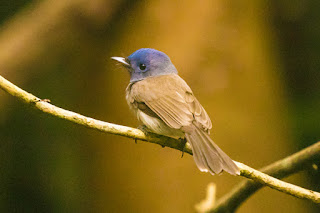 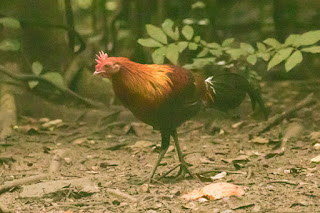 Our trip to Thailand was supposed to be more about seeing birds than photographing them but a few hours in a hide at the water holes was an attractive prospect.  There was just the one problem: although this was indeed the dry season, we had been greeted on arrival in Thailand by three days of almost continuous rain.  As a result, when we reached the so-called 'dry' stream bed where the water holes were located we found it running with water.  This shouldn't really have been a surprise as wherever we had been at that stage in the trip we had found water lying.  It was obvious that in these conditions the water holes wouldn't really be especially attractive.  Not only that but it didn't seem as though the food supply had been stocked up in recent days.  Undeterred, we settled down in the two small hides to see what might come. 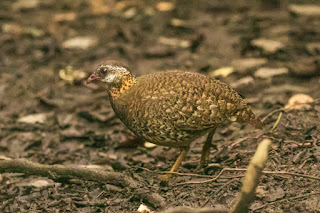 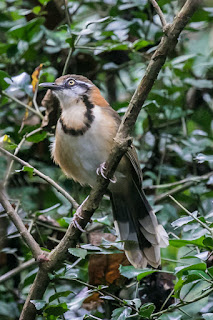 It was immediately obvious that photography was going to be something of a challenge.  Simply, it was an extremely dull, cloudy day and there was very little light reaching the area where any birds might be within range.  However, it wasn't long before birds arrived and in the next hour or so we had a variety of species at least in view if not within camera range. Particularly notable were Jungle Fowl, Black-naped Monarchs, Lesser Necklaced Laughingthrushes, Puff-throated Babblers, Brown-cheeked Fulvettas, Tickell's Blue Flycatcher, White-rumped Shama, Pied Fantail and Pale-legged Leaf Warbler.  And there were mammals, too: Lesser Mouse Deer, Grey-bellied Squirrel and Northern Tree Shrew. 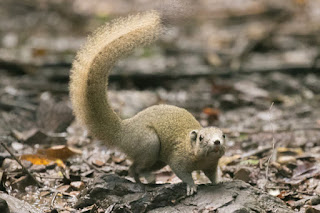 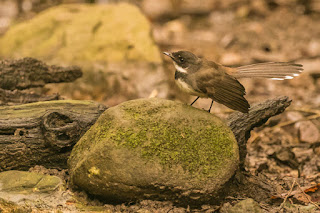 The photographs here were all taken with a recently purchased Canon EOS 7D Mk II.  It was at least an opportunity to try out this new camera's performance in low light conditions!  Camera settings have been included in the captions.

If (when?) we manage another visit to Thailand, it would be nice to have another session in one of these hides but only if it really is the dry season and the sun is shining!

One of the highlights of our recent trip to Thailand was the three-hour boat trip we enjoyed at Bueng Boraphet, one of the country’s largest wetlands, located near the city of Nakhon Sawan, about 240km north of Bangkok.

We always like boat trips but especially ones that are on flat calm fresh water lakes like this one and on a stable boat with comfortable seating.  Add hundreds of birds, good light for photography and a boatman who could spot birds and identify them and we had a near-perfect morning.  As well as the birds, a fine array of water lilies and lotus flowers were quite a sight in themselves and made a very nice setting for many bird photos. 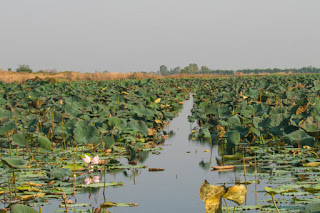 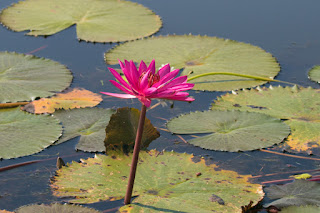 Most of the birds we saw were, of course, wetland species and several of them were familiar to us from Europe.  There were many Great & Little Egrets, Grey & Purple Herons, Black-crowned Night Herons, Glossy Ibises and Little Grebes.  However, lots were new including Bronze-winged & Pheasant-tailed Jacanas, Little & Indian Cormorants, Oriental Darters, Grey-headed Swamp-hens, White-browed Crakes and most numerous of all, Asian Openbills.  The Pond Herons we saw here were presumed to be Chinese Pond Herons but separating this species from Javan Pond Heron is nigh impossible unless they are in breeding plumage. 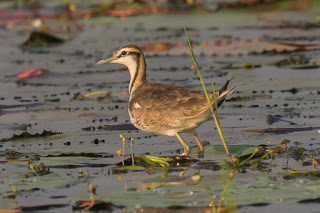 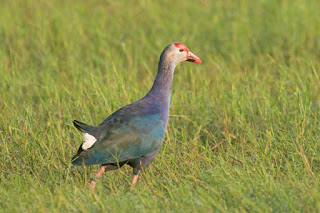 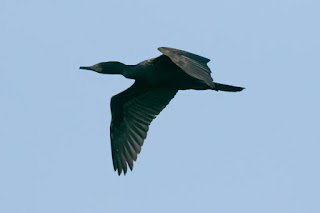 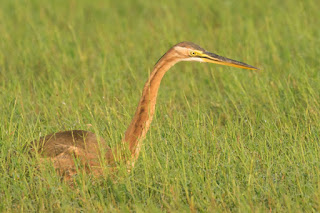 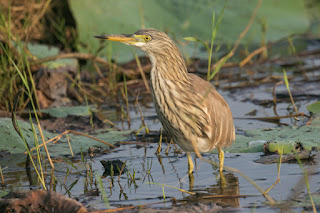 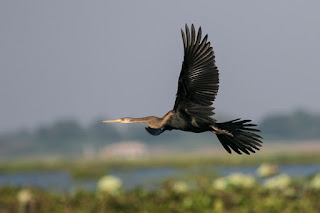 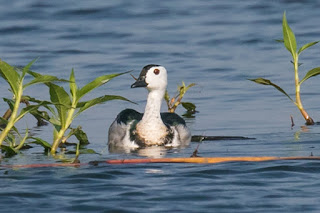 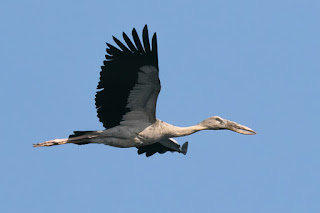 There were a few passerines such as Bluethroat, Zitting Cisticola and Striated Grassbird and raptors, too with Peregrine Falcon, Eastern Marsh Harrier, Black-winged & Black-eared Kites all seen well. 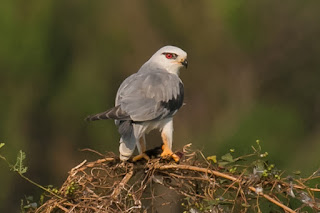 Bueng Boraphet will forever be associated with the enigmatic White-eyed River Martin, a species that presents one of the most puzzling mysteries of Asian ornithology.  Although quite distinctive in appearance it had been completely overlooked until it was discovered during a ringing expedition there in 1968.  It was recorded again at the lake during several subsequent winters but it hasn’t been seen with certainty anywhere since 1980.  As a result very little known about it but it’s an interesting story that you can find here. 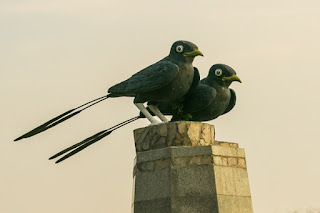 We returned to Bueng Boraphet at the end of our tour for a walk around the Waterbird Park on the south side of the lake.  This area of wetland with reedbeds and scrub proved to be quite productive and it was here that at last we saw Siberian Rubythroat.  Other highlights of the morning were Burmese Shrike, two Indian Nightjars, Blue-tailed & Chestnut-headed Bee-eaters, Freckle-breasted Woodpecker, Scarlet-backed Flowerpecker and Brown-throated Sunbird. 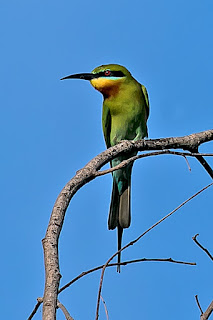 We Sora crake in Silves!

It always seems to happen when we're away from the Algarve - someone finds a rare bird here!  Just recently, while we were in Thailand, news reached us of a Sora that was showing well along the Arade river in Silves, a small town best known for its red sandstone castle and its cathedral.

This is the first record in mainland Portugal of Sora and it's perhaps not surprising that it was initially misidentified as a Spotted Crake, a close relative but a species which itself would have been unusual in January. 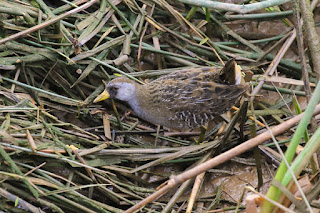 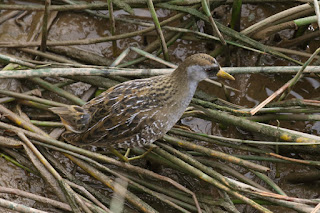 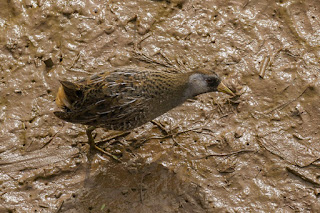 Sora is a species of crake in the genus Porzana that breeds in North America and migrates to spend the winter as far south as Ecuador and Colombia.  They can be quite secretive birds and difficult to observe and the possibility must be that this one in Silves arrived there some time ago, perhaps during the autumn migration season in October or November, and has remained undetected for several weeks.

Thankfully, it was still there this morning when we went to take a look.  We watched it for about 45 minutes as it scurried about below us and frequently disappeared for short spells in the riverside vegetation.  As the photographs show, we were looking down on it, which made it easier for us to keep track of it.

We have seen many Soras in various different parts of the USA but it was good to see one here, our first in Europe.
Posted by Peter and June at 22:23 No comments: