On Sunday we enjoyed a day of relaxed, 'social birding' with friends, Jan and Adrian. We spent the morning at Doxey Marshes Nature Reserve and in the afternoon had a walk along the south shore of Belvide Reservoir.

Doxey is a reserve about which we have had some harsh things to say in the past. Management of water levels has been a serious problem for many years and on countless occasions we have been disappointed to find either too much water or not enough. Yesterday we were pleasantly surprised to find the whole reserve looking in good condition and if that can be maintained over the next few weeks spring wader passage should prove very interesting. A pity we won't be here to enjoy it!

We did see all the regular breeding wader species, Redshanks, Oystercatchers, Lapwings and Little Ringed Plovers, and a few more migrants were singing, including a Sedge Warbler and a Grasshopper Warbler.

By the time we reached Belvide, the day had warmed up nicely. Here, too, there were Redshanks but fewer summer visitors than we might have expected. It was surprising to see only a handful of Swallows over the water and there were still rather few warblers in evidence. Perhaps we are being impatient but, just as in Portugal, it does seem that migrants are slow in arriving. There were still plenty of birds coming to the feeders, including numerous Reed Buntings, Tree Sparrows and Chaffinches, and a few Bramblings are still being seen in the Reservoir Plantation. Although we see or hear Little Owls pretty much every day in the Algarve, it was good to see one here as they certainly seem to be fewer in the UK these days. Why, we wonder, should our attitude towards to this introduced species be so different from our feelings towards most of the others?
We are currently considering a camera up-grade and Adrian kindly loaned us his Canon 50D for the day so that we could try it out. These images were taken with the 50D and our Canon 100-400mm lens. No decisions have yet been made! 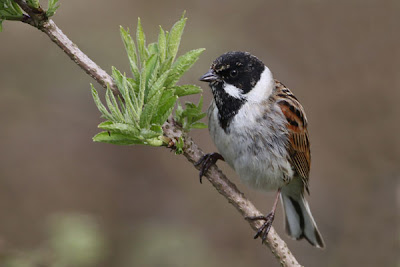 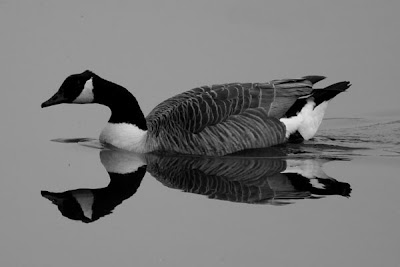 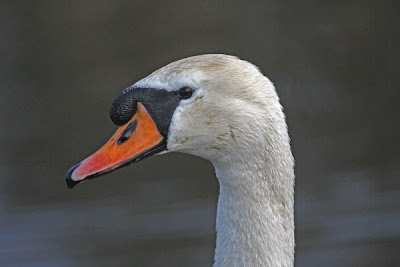 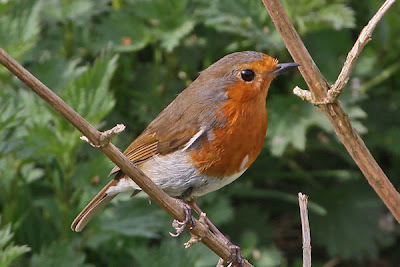 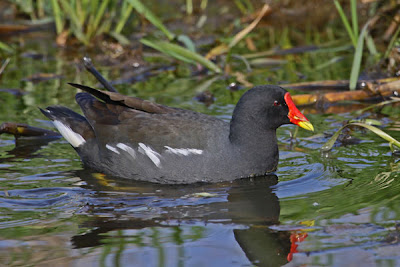 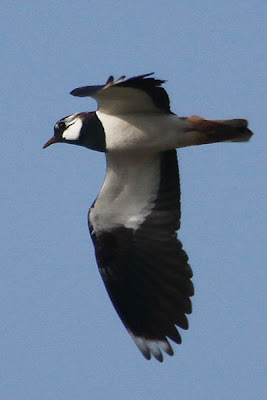 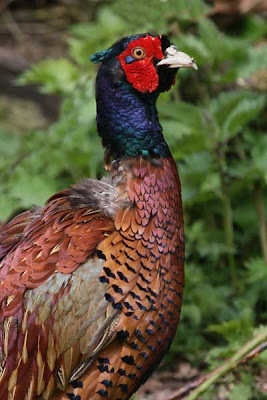 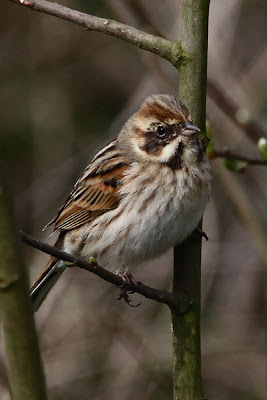 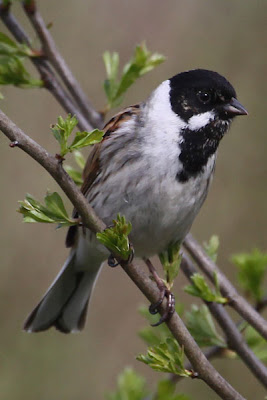 We're back in the UK for a week or so and back in SJ92B, our adopted tetrad for the BTO Atlas project (see post for 13th January 2009). This morning's two-hour Timed Tetrad Visit confirmed our previous view that this is not the most exciting or productive birding area but we had a pleasant enough walk recording a total of just 36 species in the process. To be fair, although the number of species was low we did see a reasonable number of birds and making accurate counts of some of the common and more mobile species wasn't easy. At times there seemed to be Wood Pigeons and Blackbirds flying in all directions!

It's still very early in the season and we would have preferred to postpone this visit until a few more migrants have arrived. Unfortunately, other commitments prevent that. As it was, the only summer visitors we found were Willow Warblers, Chiffchaffs and a single Blackcap. Maybe some of them had spent the winter in the Algarve or at least passed through on their way to or from Africa. It would be nice to think so!

As usual, we took a few photographs: 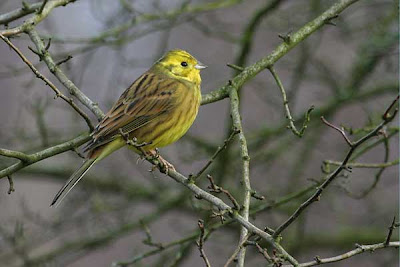 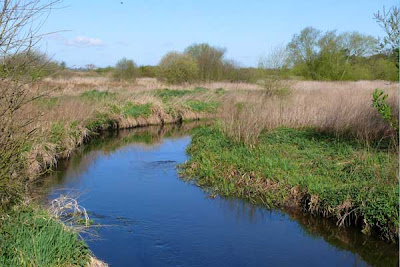 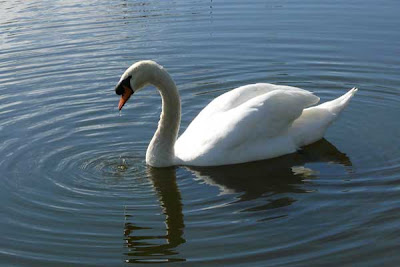 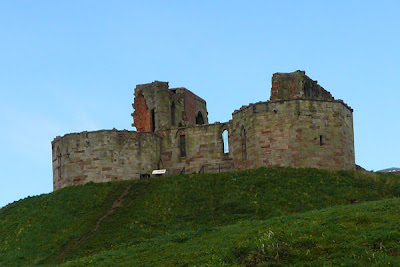 Stafford Castle or what remains of it! Nesting habitat for Feral Pigeons 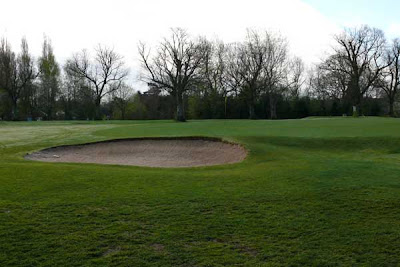 Stafford Castle Golf Course - a habitat shared with the Algarve!

A Day in Doñana

We spent yesterday in and around Doñana National Park across the border in Spain. Although we drove through thick fog on the way there, the day turned out warm and sunny, thankfully lacking the cold wind that has been a feature here recently.

We always enjoy Doñana. We regularly see there species such as Red-knobbed Coot, White-headed Duck and Marbled Duck that are found only rarely in Portugal and others such as Glossy Ibis, Purple Heron and Whiskered Tern that occur there in greater numbers than we ever see them in the Algarve. Yesterday we also saw five Pin-tailed Sandgrouse, a species that we have never seen in Portugal. 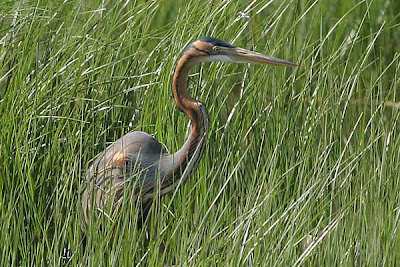 It is difficult to think of a day when we saw over 100 Black Kites and more than 50 Griffon Vultures as a poor day for raptors, but numbers of the other regular species were fairly poor. 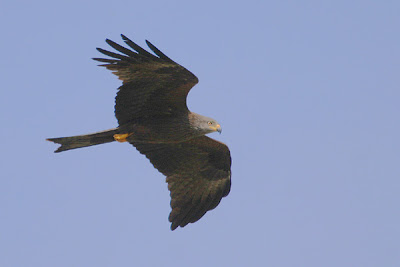 On the other hand, we saw plenty of migrant passerines, a nice selection of waders and four species of larks - a total of 87 species in all. 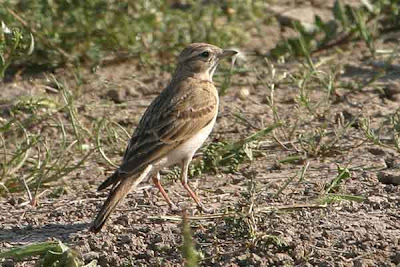 It is impossible to do justice to Doñana in a one-day visit but we never come away disappointed.

As already reported, we saw Spanish Imperial Eagles again yesterday. We have been seeing them regularly in the Baixo Alentejo for quite a while now but, make no mistake, these are really rare birds. BirdLife International, the global Partnership of conservation organisations, estimates the total population at 300-400 individuals, which is a significant increase compared with 30 years ago, but it is still classified as Vulnerable on the IUCN Red List. Almost all of these birds are in Spain with just a handful in Portugal.

Successful breeding took place in Portugal in 2008 for the first time in many years and the species looks to be attempting re-colonisation of areas from which it disappeared in the 1970s. However, it has a battle on its hands. Threats to the species include habitat loss and fragmentation resulting from deforestation for agriculture and timber; juveniles are frequently killed in collisions with power lines; rabbits form a significant proportion of their diet and declines in rabbit populations as a result of viral haemorrhagic disease are thought to have an important effect. However, believe it or not, even in 2009, it is hunters who appear to pose the greatest threat!

The report early last month that the adult male of the successful breeding pair had been found dead from a gunshot wound was enough to make us despair. Apparently, the circumstances were such that the killing could only have been deliberate and pre-meditated with no case even for mistaken identity. The bird’s body was found close to the nest site. It had been shot at close range.

There has naturally been an outcry here with newspaper reports, statements from SPEA and others, the police are involved and there are calls not only for those responsible to be found and punished but for changes in the law relating to hunting zones and for education programmes to be introduced with a view to trying to prevent any repetition of this crime. However, this depressing event is a reminder of why it is that Spanish Imperial Eagles have so long been absent from Portugal: persecution by the hunting fraternity. And do we think that Spanish Imperial Eagles are the only birds of prey targeted by these people? No!
Posted by Peter and June at 17:25 No comments:

Yesterday we were in the area around Castro Verde with a familiar list of target species. It was a bright and sunny day but a wind coming mostly from the north had some of us wearing three layers of clothing early on.

Our birding began in impressive style. Not far from Castro Verde, we stopped the car and jumped out when a male Montagu's Harrier was spotted. We had a decent enough view and it soon went on its way but within minutes we had also seen several Great Bustards, Little Bustards, Lesser Kestrels, Red Kites and Calandra Larks, not to mention a couple of Common Buzzards and two Little Owls! All these without walking away from the car - not a bad start!

Later we saw lots more Montagu's Harriers. On several occasions there were as many as six in the air together and we just sat and watched their marvellous sky-dancing displays. There were plenty of Great Bustards to be seen also, maybe 100 in total during the day. As usual, Little Bustards were less conspicuous but we did have two fly up from beside the car at one place that we stopped. This was the same spot from which we had managed to see a Spanish Imperial Eagle on three separate occasions in March. Well, it happened again! Not surprisingly, we never now drive past this little pull-in area. Soon after we flushed the Little Bustards we were watching Griffon Vultures rising on the warming air and then an immature Spanish Imperial Eagle came into view. It wasn't as close as we have seen it on some previous occasions but close enough.

Later we saw more Spanish Imperial Eagles (probably including the bird seen earlier) at another 'hotspot' not very far away. That was just after we had seen Black-bellied Sandgrouse there and before we found a pair of Stone-curlews! It was that sort of day. By the time we headed for home, we had seen about 70 species.

It would be a shame not to mention the White Storks' nests that are such a feature of this area. We haven't counted them but there must be 50 or more nests between Castro Verde and Mértola, most of them on poles along the roadside. The bill-clattering display of these birds was a sound we heard regularly during the day. Many of their huge nests are tenanted by Spanish Sparrows - but don't you think they and the Imperial Eagles should be Iberian rather than Spanish?
Posted by Peter and June at 11:51 No comments:

We never tire of visiting Castro Marim. We were there again yesterday afternoon, just for an hour or so. Our targets were Little Bustard, Spectacled Warbler, Stone-curlew and Lesser Short-toed Lark and the first three were quickly and easily found. However, although it was bright and sunny, in a strong wind, the larks were more difficult and we really didn't get what might be described as a 'tickable view'. Consolation came in the form of a Great Spotted Cuckoo and there was also a fairly distant look at a Caspian Tern and a Marsh Harrier.

This morning we returned to Quinta do Lago but for a change from recent visits we walked in from the Faro side, past Ludo Farm. Again it was bright and sunny but with a stiff breeze blowing. It was no surprise that almost the first birds seen were two Booted Eagles - they are very regular here, even in winter. 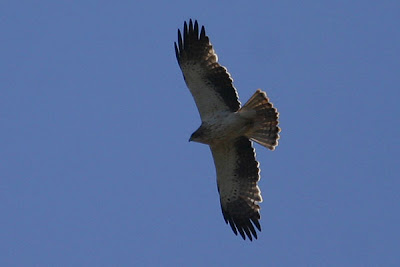 Booted Eagle
A little further on we saw what might well have been the same Black Kite that was in the area on Monday but the highlight of our walk to Lago do São Lourenço was a Black Stork, seen first of all in flight and then perched in a tree. The explosive calls of Cetti's Warblers could be heard everywhere, several European Reed Warblers were singing and about a dozen noisy Bee-eaters were always just out of camera range.
At the lagoon a first-winter Little Gull was feeding over the water but otherwise there was little change from earlier in the week. As always, there were good opportunities to photograph several species and the Red-crested Pochards were difficult to resist. A Little Grebe was also reasonably obliging. 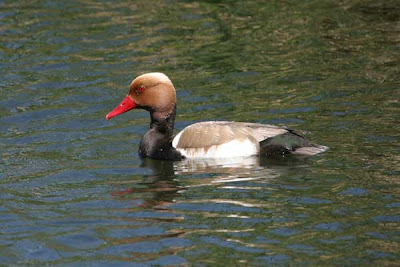 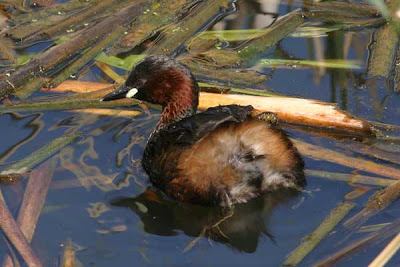 As we returned to the car, this Yellow Wagtail allowed close approach. The wind was so strong that it was probably frightened to let go of the power cable! 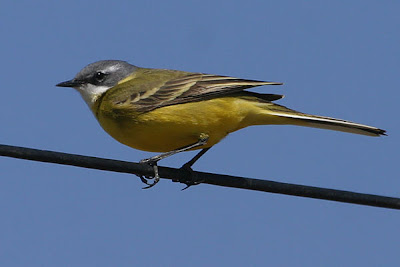