Although January might not be thought of as the most exciting time of the year for birding in the Algarve, there continue to be a succession of interesting birds to see and plenty of reasons to be out, including the really nice weather. 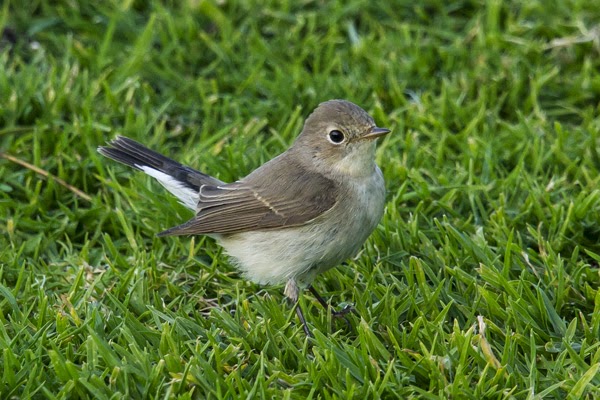 The influx of Brent Geese at the start of the month was unusual and caused a bit of a stir but the bird of the winter so far has surely been the Red-breasted Flycatcher, which was first reported on 12th December and still remains at the edge of the golf course at Quinta do Lago.  All previous records of this species in Portugal (fewer than 20) have been in October or November and none of those was reported to have stayed for more than a few days so this one is exceptional.  Living alongside Chiffchaffs and often feeding on the ground, it is obviously finding enough to eat but would probably have been better off heading to India or Pakistan for the winter with the rest of the Red-breasted Flycatcher population.

Other rarities have included a Ring-billed Gull at Lagoa dos Salgados, a Caspian Gull at Quarteira, an American Wigeon between Olhão and Faro and a Red-knobbed Coot at Foz de Almargem.  The last two of these are presumed to be the same birds that spent much of last winter at the same sites. 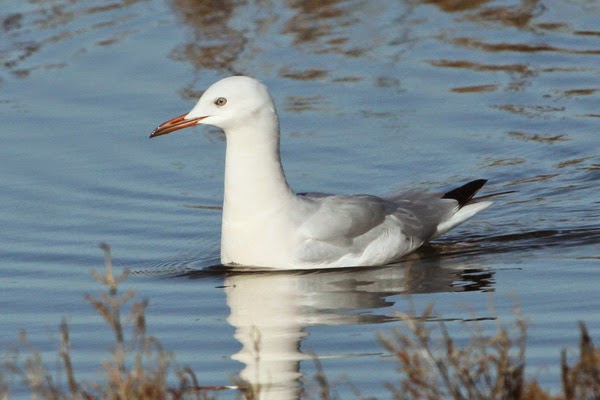 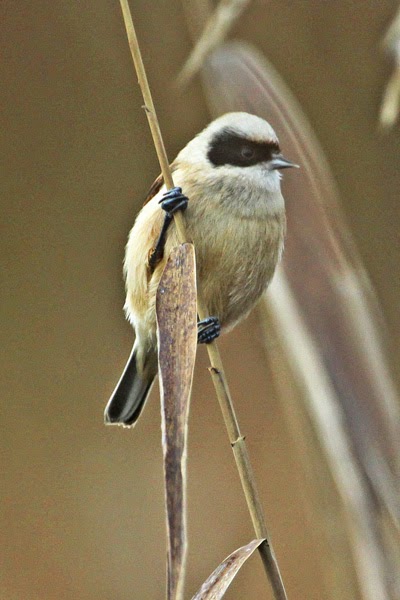 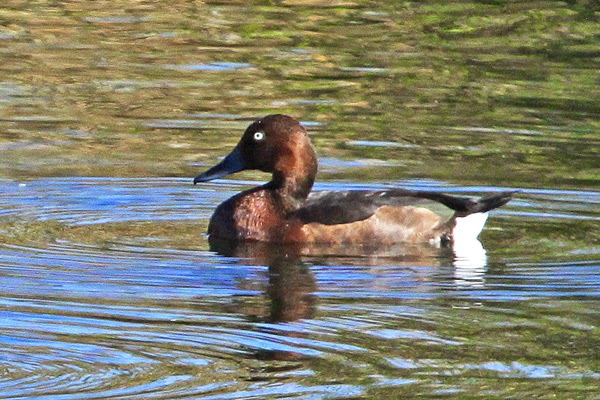 In the ‘interesting and good to see category’ but not rare are several species that are easy to find but localised or here in just small numbers.  These include Penduline Tits, Alpine Accentors, Slender-billed Gulls, Ferruginous Ducks and Black-necked Grebes.

Recently we’ve spent quite a lot of time counting birds.  As usual, we helped out the ICNF with the monthly waterbird count at the Castro Marim Reserve where Greater Flamingos were the most numerous species - there were 1,069 of them!  Next came Black-tailed Godwits (824), Dunlin (795), Avocets (448) and Black-headed Gulls (273).  We get two hours either side of high tide to do this count and we usually need most of that time. 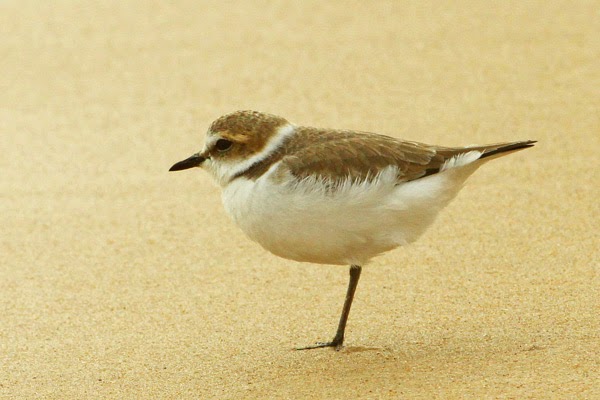 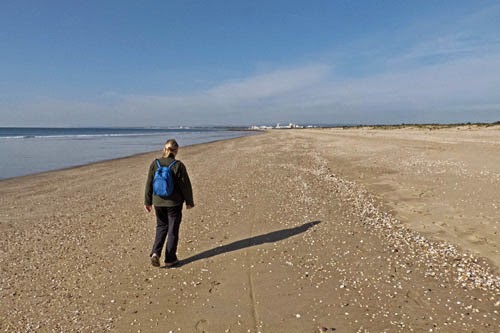 Walking the beach for Project Arenaria

When we went a few days later to survey a stretch of beach just east of Monte Gordo as part of Project Arenaria it was a different story entirely.  This was a low tide count and although we had a long and pleasant walk we saw very few birds.  Based on our experience in previous years we had expected to find a lot of loafing Yellow-legged & Lesser Black-backed Gulls but there were none at all and we found just a handful of Sanderlings and Oystercatchers and a single Kentish Plover.  As part of this survey we are also required to count the number of people on the beach and the number of dogs not on a leash.  The people didn’t quite outnumber the birds but it was a close thing!  Project Arenaria is a survey of the non-estuarine coast.

Last week we were back to high tide counts.  These were at Santa Luzia, Livramento and Fuseta as part of a survey of the entire Ria Formosa organised by the ICNF.  Both Santa Luzia and Fuseta had more than 2,000 birds.  At Fuseta more than half of the birds counted were gulls of five different species; at Santa Luzia there were 15 wader species that made up more than 80% of the total. 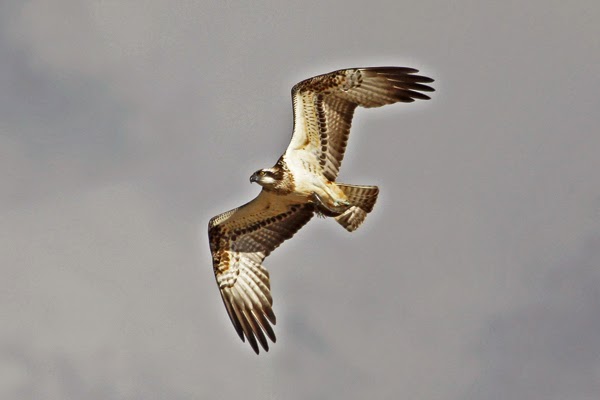 Last Saturday we devoted the best part of a day to a count of wintering Ospreys that involved more than 130 observers throughout the country.  Surprisingly, at the end of the day, even allowing for some double counting it was estimated that between 71 and 81 birds had been seen with a minimum of ten of those being  in the Algarve.  Although we didn’t see one on the count day in the area that we were allocated, they have definitely become a familiar sight here and we saw one in Tavira yesterday that may well have been missed on Saturday.  No doubt we’ll be seeing more soon as birds start to return from West Africa on their way to Northern Europe.
Posted by Peter and June at 16:28 No comments:

As reported previously, one of the highlights of our birding on New Year’s Day was finding a flock of ten Dark-bellied Brent Geese in the Ria Formosa.  These are birds that breed in Siberia and normally spend the winter in Western Europe, mainly in the south of England, northern France and the Dutch/German Wadden Sea.  It was surprising therefore to find these in southern Portugal and the species is rightly considered to be a rarity here. 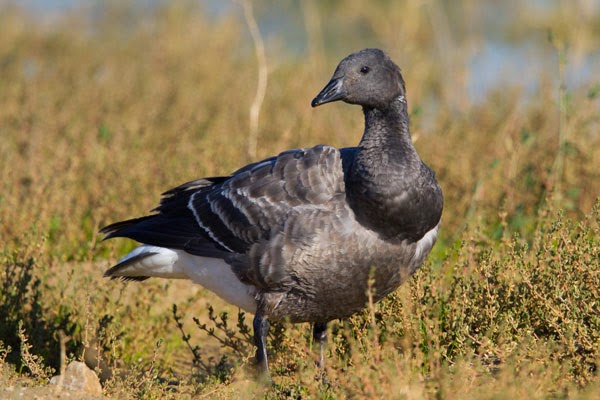 We now know that these ten geese seen near Faro are only part of the story and that there has been quite an influx of Brents into Portugal in the past few weeks.  There was a single bird in the Estuário do Cavado in the north of the country as early as 27th October and there were a few reported further south around Peniche and Lagoa de Óbidos early in December but it wasn’t until after Christmas that it became clear that something a bit unusual was going on with birds at the Ria de Aveiro, Lagoa de Óbidos, Lagoa de Albufeira and the Estuário do Sado.  In the Algarve, there have been birds in the Ria Alvor (5) and at Lagoa dos Salgados (1) as well as those in the Ria Formosa.

Because birds may be moving around it is difficult to be precise about how many of them there have been but Gonçalo Elías has collated the records and estimated the total to date to be between 62 and 82.  Although recent winters have seen small numbers of Brents arriving in Portugal, there hasn’t been an influx on this scale since 1991/92 when 110 birds were reported here, 73 of them in the Ria de Aveiro. 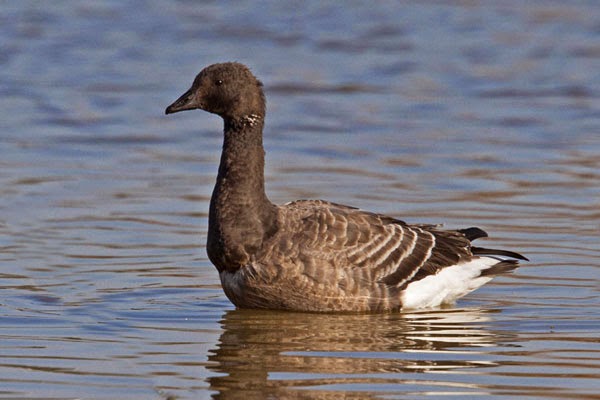 What is interesting and has been drawn to our attention by Edmund Mackrill, who has been counting and ageing Brent Geese in Lincolnshire for almost 30 years, is that the 1991/92 influx and this latest one follow particularly successful breeding seasons.  Is there a connection, we wonder?

It has been suggested that breeding success in the tundra is connected to the 4-year Lemming cycle.  This may be the result of predators such as Arctic Foxes switching to eat eggs and young birds in years when Lemming numbers are low.  If that is so, one might almost say that the occurrence of Brent Geese in Portugal is at least loosely correlated with the breeding of a small, furry rodent in the Arctic - not something that would readily spring to mind!

You can find out more about Dark-bellied Brent Geese here, here and here.  You can see here a short clip showing an adult and three young birds at the Lagoa de Albufeira, which apart from anything else demonstrates just how approachable these geese can be and this has been a feature mentioned by observers elsewhere.  It was certainly true of the bird at Lagoa dos Salgados that we saw on 7th January.

It would be very interesting during the coming days and weeks, if any birders seeing Brent Geese here in Portugal could age them and perhaps determine brood sizes and then post details in a comment here on the blog.

Yesterday we were in the Algarve to see the start of 2015 and we enjoyed an excellent day’s birding as we attempted to beat our previous best New Year’s Day species total.  That record was set in 2010 when we managed to find 106 species during a day spent mostly at Ludo, Quinta do Lago, Castro Marim and Tavira.

This is not the sort of birding that we usually do; mostly we prefer a more relaxed approach, but once in a while we like to demonstrate just how good birding in the Algarve can be in ‘winter’.  It’s not about getting the year list off to a good start, either - we don’t keep a year list - it’s just a bit of fun! 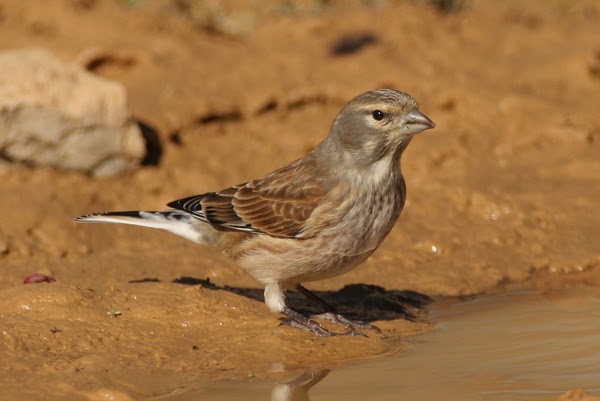 The weather can make a huge difference to the outcome of days like this and we could hardly have wished for better.  Admittedly it was cold when we left home at 6.45am and there was frost on the ground when we arrived at Ludo but we didn’t see a cloud all day and later the temperature reached a toasty 17ºC.

Our plan had been to follow more or less the same route that had brought reasonable success in 2010 but then came a remarkable report of five species of hirundines being seen at Parque Ambiental de Vilamoura on New Year’s Eve.  Hirundines are pretty scarce here currently.  In fact we have seen only Crag Martins in recent weeks.  Surely we couldn’t resist the possibility of five species that would be a substantial boost to our total. 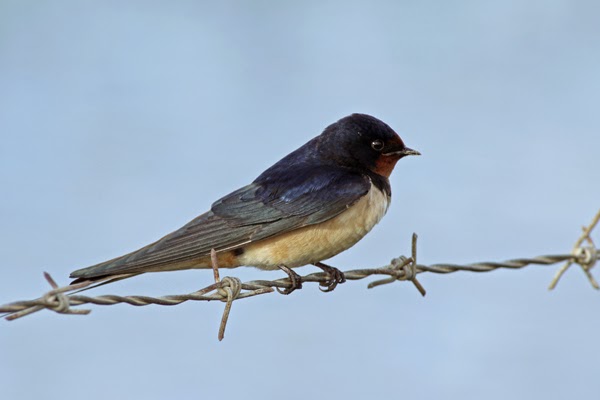 And so it was that after spending most of the morning at Ludo, Quinta do Lago and Praia de Faro, instead of heading back east, we decided to go further west to Vilamoura.  This ruled out any chance that we might have time to go to Castro Marim, which is actually one of our favourite sites; there were a couple of species at least that we might have found there that we were now unlikely to see.  Still, we reckoned, Vilamoura and the hirundines were a better bet.

As it turned out, we did see species at Vilamoura that we probably wouldn’t have seen elsewhere, notably Penduline Tit and Ferruginous Duck, but we didn’t see any hirundines whatsoever!  With the benefit of hindsight, the time spent driving there and the time that it took to walk to the further of the two hides might perhaps have been better spent elsewhere.  Maybe we might have found some of those species that we think of as being common but which simply don’t put in an appearance on days like this when you particularly want them.  We’re talking here about the likes of Linnet, Teal, Golden Plover, Iberian Grey Shrike and Stone-curlew all of which we have seen in recent days but failed to find yesterday. 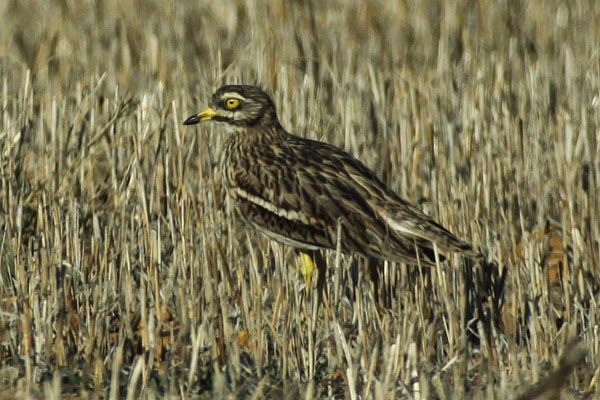 After leaving Vilamoura we visited several of our favourite sites close to Olhão and then finished the day around Santa Luzia and Tavira where we knew we could easily and quickly find Audouin’s Gull, Slender-billed Gull, Bluethroat, Black-necked Grebe, Greenshank and Red-legged Partridge but wrongly thought we would find Stone-curlew. 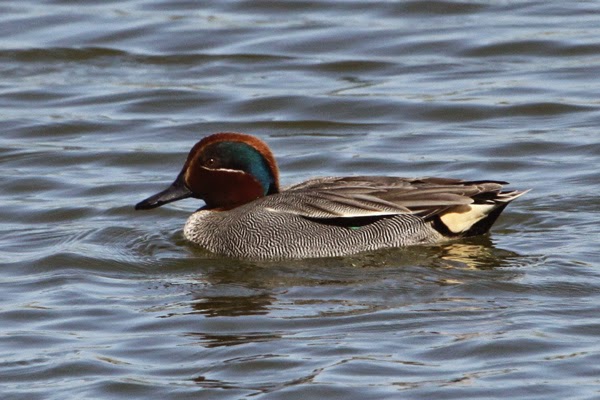 We finished the day having seen 105 species, just one short of our record.  We might have stayed out longer and looked for a Barn Owl or even an Eagle Owl but we reckoned that if we could be out all day and not see a Linnet, the chances of seeing another owl were probably slim!  And, anyway, we weren’t in a competition, we were just out enjoying ourselves. 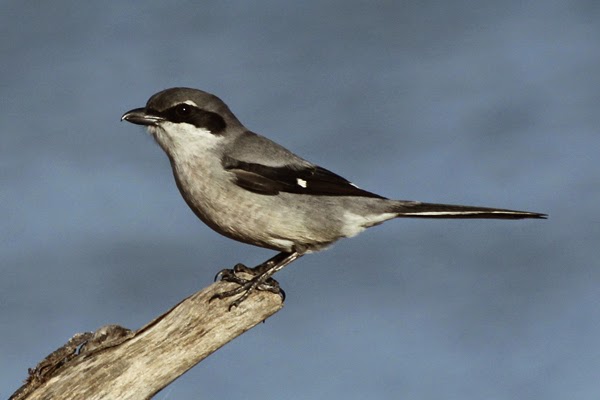 The highlight of our day was finding a flock of 10 Brent Geese in the Ria Formosa.  This species is a rarity here and it was the first time we had seen them in the Algarve.

It would be nice to think that one year we might improve on our record from 2010.  There are probably about 30 more species here in the Eastern Algarve that we might have seen, some of which would have been easy given another couple of hours.  The main limiting factor on New Year’s Day is the extent of territory that can reasonably be covered in the relatively short hours of available daylight.  The key, therefore, is in the planning and perhaps also in not allowing yourself to be diverted from the plan in the hope of seeing hirundines at Vilamoura!

Over the past few years we’ve been lucky enough to spend New Year’s Day birding in Costa Rica, Cuba, South Africa, Texas, Arizona, Florida and California but on a beautiful day like yesterday the Algarve stands comparison with any of these.