We‘re just back from an exhausting but very enjoyable weekend at the Birdfair held as usual at Rutland Water Nature Reserve.  The organisers describe it as the international wildlife event of the year and who would argue?  This year Birdfair was celebrating its 25th anniversary and with almost 350 exhibitors and four simultaneous lecture programmes it has grown well beyond anything that could possibly have been imagined back in 1989 when Tim Appleton and Martin Davies organised the first modest birdwatchers’ fair on behalf of the RSPB and the Leicestershire and Rutland Wildlife Trust. 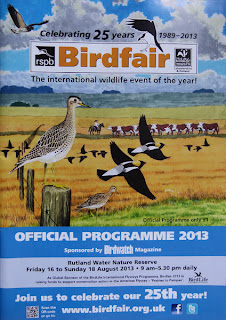 Right from the start, profits from the Birdfair have been donated to conservation projects with the total amount raised now standing at more than £3 million.  Currently Birdfair is supporting BirdLife International’s Global Flyways Programme, funding projects to study and help migratory species.  This year it is grassland-dependent migrants in the Americas that are the focus, species such as Upland Sandpiper, Buff-breasted Sandpiper, Swainson’s Hawk and Bobolink that rely on the effective management of grasslands throughout the Americas flyway where the remnants of native grasslands are fast disappearing under grain, oil-seed and other commodity crops.  A Birdfair-funded project will co-ordinate work at grassland Important Bird Areas in Mexico, Colombia, Bolivia and Argentina. 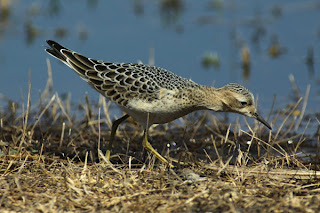 Buff-breasted Sandpiper - this one was in the Algarve 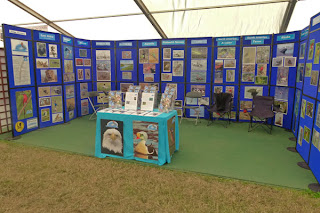 The Avian Adventures stand before the Birdfair opened - all neat and tidy! 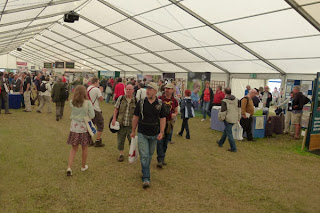 Marquee 3 - there were 10 marquees this year

Birdfair is undoubtedly one of the highlights of our year.  We always come away disappointed by how quickly three days have passed and because in that time we haven’t been able to get round the whole site and see everything and everybody.  Already next year’s event is in our diary - it’ll be on 15th, 16th & 17th August 2014.

Time to Stop the Shooting!

We applaud the Portuguese Liga para a Protecção da Natureza (LPN) which has today called for a two-year moratorium on the shooting of Turtle Doves. Tomorrow sees the start of the hunting season but it surely makes no sense whatsoever to continue killing a species that is clearly in serious trouble with a population that continues to decline at an alarming rate. As an example, the British population is reported to have reduced by 90% since the 1960s. 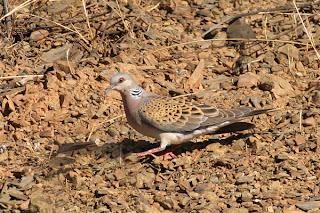 Major changes in farming methods and adverse conditions in their wintering areas in Africa may well be the main causes of the decline in Turtle Doves and competition with Collared Doves could also be a factor. However, the scale of the slaughter of these birds in Italy, Spain, Greece, Cyprus, Malta, Portugal and elsewhere in Europe cannot be sustainable. And then, outside the European Union, there’s Morocco, Egypt and other countries in North Africa where large numbers are also shot, many of them by ‘tourist’ hunters from Europe!

While resources are being devoted to research and conservation programmes in the UK and elsewhere and there is a long-term Management Plan in place with the objective of halting the species’ decline, it makes very little sense to allow up to an estimated 3 million or more of these birds to be legally killed actually in the EU. In fact, it’s complete madness! 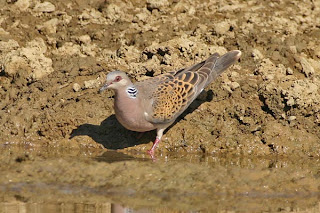 The LPN press release calls for the Portuguese Government to act now to protect the Turtle Dove before it is too late and the population reaches the point of no return. The plight of the Turtle Dove in Europe is unsettlingly similar to that of the Passenger Pigeon in North America, which was also once a common and widespread bird but driven to extinction as a result of hunting pressure and habitat loss. Nineteenth century Americans may have had some sort of excuse in their ignorance of what was happening to the Passenger Pigeon but there can be no such excuse for Europeans if we allow the Turtle Dove to continue its slide to oblivion.

We had the idea that while we are in the UK we would try to visit at least a few of what were once our regular birding sites around the West Midlands and maybe fit in a trip a bit further afield.  We have plenty of other distractions but we hoped that this vague plan would ensure that we get out and see at least some birds while we are here.

We started by going to our local reservoirs, Blithfield and Belvide, and since then we’ve been birding on Cannock Chase, at Doxey Marshes, at Chillington and at Upton Warren, all of these places where we have spent many happy hours over the years.

We have blogged already about Blithfield and Belvide; our time on Cannock Chase has been in the evenings, mostly looking for and at Nightjars; we spent an enjoyable sunny afternoon at Chillington looking as much for butterflies as for birds.

Just 40 miles apart, Doxey Marshes and Upton Warren, one in Staffordshire and the other in Worcestershire, are very similar in some respects but in others they are also very different.  Both are reserves managed by county wildlife trusts, both have several pools that have formed as a result of land subsidence following brine extraction, both are bisected by rivers (the Sow and the Salwarpe) and both are designated as Sites of Special Scientific Interest.

Amongst the birds we saw at Upton Warren last week were more than 80 Lapwings, 20 Curlews, 14 Green Sandpipers, 7 Avocets, 2 Little Ringed Plovers, 2 Dunlin, 1 Common Sandpiper, 1 Common Redshank and several Common Terns.  We were able to watch these from several well-positioned hides that overlook the best areas of the reserve. 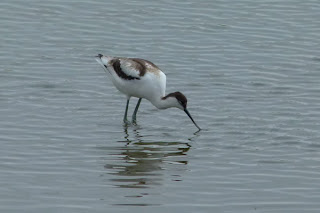 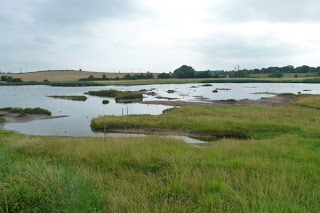 Other than a few Lapwings, our earlier visit to Doxey Marshes produced no waders at all.  There were plenty of Canada Geese and at least three pairs of Mute Swans appeared to have bred successfully but really they weren’t what we had hoped for!  The view from the only hide was certainly unrewarding, the water level on what we laughingly refer to as ‘the scrape’ being suitable for ducks but not shorebirds. 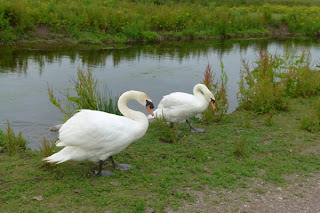 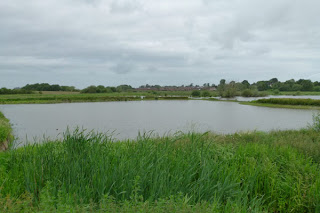 View from the hide at Doxey Marshes

Where Doxey and Upton Warren differ is in the way that they have been managed over the years and their current condition which results from that management.  Staffs Wildlife Trust has undoubtedly had difficulties to contend with.  Flood alleviation work involving the re-grading and deepening of the river have certainly had a detrimental effect and it seems that the agreement and co-operation of the Internal Drainage Board and the Environment Agency are needed before anything can be done to achieve better control of water levels.  There is also the complication that subsidence is continuing.  Four years ago the IDB and the EA were said to have begun implementation of a water level management plan to create better habitats for ground nesting and migrating birds on the reserve but there is precious little sign of that being successful or of breeding success for any of the waders that support the reserve’s status as an SSSI.  Maybe there are factors that we don’t know about.  It probably doesn’t help that the SWT newsletter Marsh Warblings, which used to keep us informed about Doxey, has been discontinued and that no Annual Report has been published since 2009. 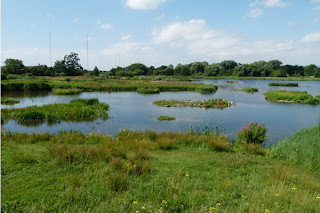 At Upton Warren amongst the species that have bred on the reserve this year are Avocet, Lapwing, Little Ringed Plover, Oystercatcher, Common Tern and Black-headed Gull.  As evidenced by what we saw during our visit, conditions are currently just right for wading birds and local birders can certainly look forward with optimism to the coming weeks of migration season.  Worcs Wildlife Trust and everyone involved with the management of the reserve are to be congratulated.  Although we no longer visit there with the regularity we once did, it’s one of the main reasons that we continue our membership and support of WWT.  Maybe if we weren’t going back to the Algarve, we would think of moving down there.

Doxey Marshes v Upton Warren?  It really is no contest!