How well do you know your magpies?  The three photographs below show three different birds; they were taken on three different continents.  Can you identify them?  We can’t say that they are three different species…but they might be!  Even those who identify birds by examining their DNA don’t seem to have reached a conclusion, so what chance for us?  Maybe you can at least suggest where each photograph was taken. 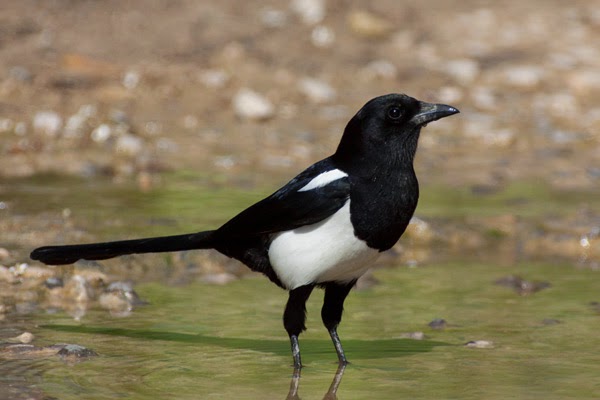 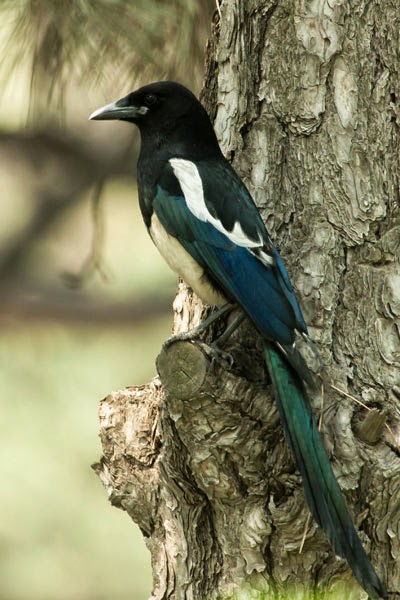 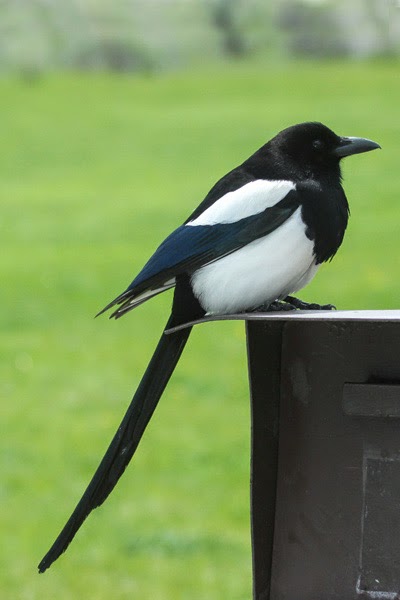 Here is another magpie.  This one’s easy - it’s obviously a Yellow-billed Magpie Pica nuttalli, which occurs only in California and which it seems everyone agrees is a distinct species.  Yellow-billed Magpies have declined in recent years with 50% of the population reportedly killed by West Nile virus between 2004 and 2006. 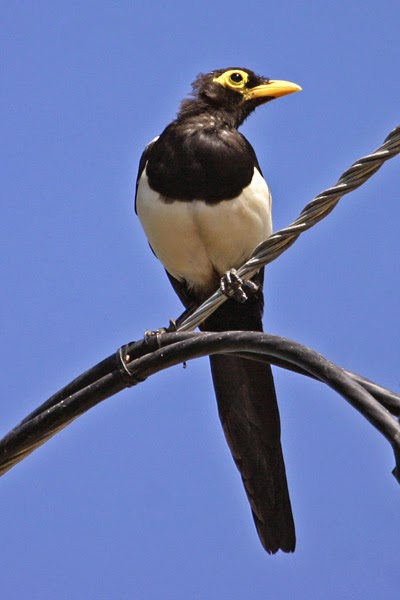 Not all magpies are black and white birds with long tails!  Below we have Red-billed Blue Magpie Urocissa erythrorhyncha from Asia, photographed in China and an Iberian Magpie Cyanopica cooki or perhaps an Azure-winged Magpie Cyanopica cyanus, photographed in Portugal.  Whether you choose to call the latter an Iberian or an Azure-winged will depend on which taxonomy you’re inclined towards.  We have blogged here on this subject in the past. 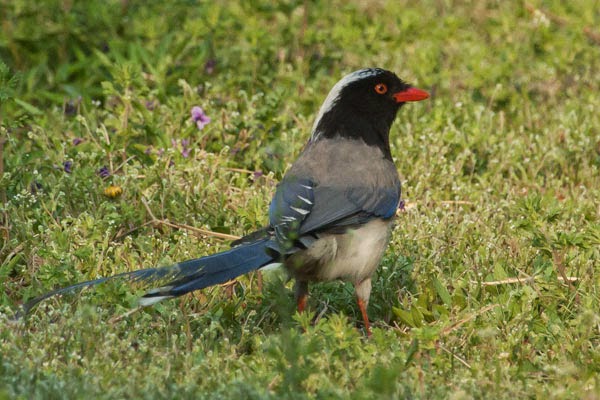 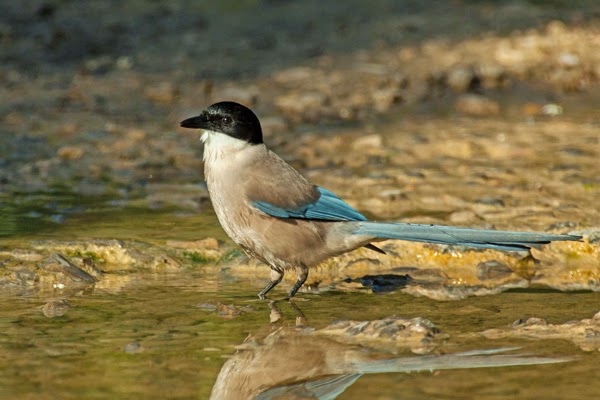 And not all black and white birds with a long tail are magpies!  Below is a Magpie Shrike Urolestes melanoleucus, a fairly common bird in savanna-woodland in eastern and southern Africa.  The photograph was taken in Tanzania.  Presumably the English name was given to the bird by a 19th Century European explorer who saw some similarity to the plumage and shape of Pica pica. 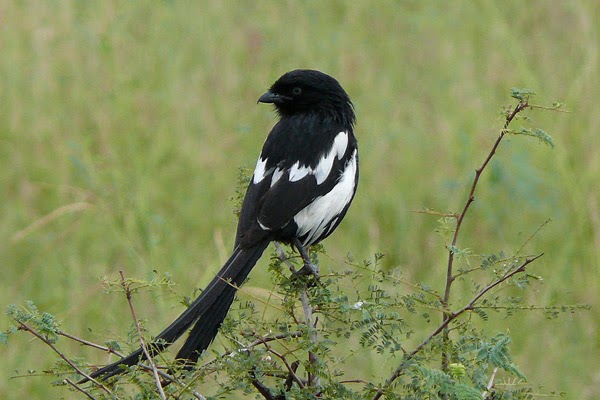 Cisticola juncidis is a very common species in the Algarve, one that we can expect to come across almost every day.  Although it is one of our smallest birds, not much bigger than a Wren, its aerial displays and distinctive but monotonous ‘dzip…dzip…dzip…’ song makes it hard to miss.  It mainly occurs in open, grassy areas, a habitat that is still plentiful. 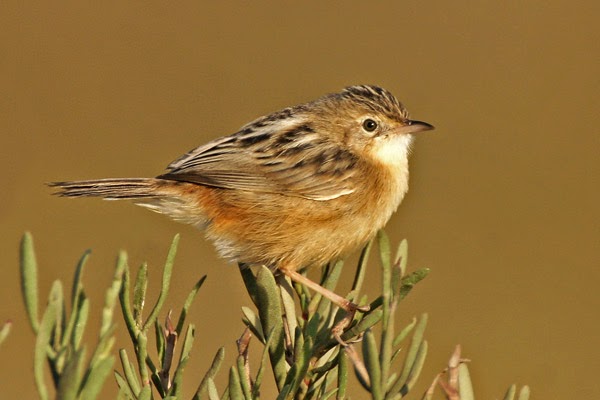 But what should we call it?  You can still find field guides that use the English name Fan-tailed Warbler and rather surprisingly that is what you will also see on the BTO website.  It is little wonder then that we come across lots of birders who continue to refer to the bird by what we woud argue is a potentially confusing and therefore out-dated name.

Surely there should only be one species in the world called Fan-tailed Warbler and that name belongs to Basileuterus lachrymosus, a bird that inhabits Central and North America. The counter argument, of course, is that most birders in Europe aren’t even aware of this New World species and that when one is talking about a bird this side of the Atlantic the meaning is obvious, context is everything.

Whatever your view, it does surely seem more normal these days to use the name Zitting Cisticola.  Certainly, that’s what you will find in most modern books and recent field guides.  It is the name adopted by all of the recognised authorities, BirdLife, IOC, BOU, etc, etc.  and with roughly 50 other species in the genus Cisticola all having Cisticola as part of their English name, it does seem sensible that C. juncidis should conform. 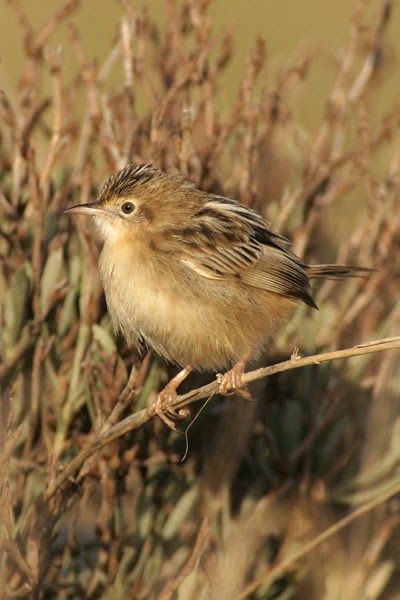 We have a feeling that at least some people cling to Fan-tailed Warbler and hesitate to adopt the more logical name simply because they’re not comfortable saying Zitting Cisticola, they’re not quite sure how to pronounce it.  It’s hard not to have a little sympathy with that.  Someone even suggested to us that it sounded too much like a skin complaint!

We tend to refer to the bird as a ‘sis-TIC-ola’ and this is the pronunciation favoured by Wikipedia and others.  However, it’s not hard to find alternative guidance and another example has just come to our attention, in the recently published Latin for Bird Lovers by Roger Lederer and Carol Burr.  In this we find ‘sis-ti-KO-la’ as the suggested way to say it.  It certainly trips off the tongue more easily than ‘sis-TIC-ola’ perhaps because it brings to mind that well-known carbonated soft drink!

Our conclusion would be that both ‘sis-TIC-ola’ and ‘sis-ti-KO-la’ are acceptable pronunciations but surely it is time we abandoned Fan-tailed Warbler.

The ‘Zitting’ part of the name of course refers to the birds’ song.  It follows other members of the genus that have similar names descriptive of their vocalisations: Bubbling, Chattering, Churring, Chirping, Croaking, Piping, Rattling, Siffling, Singing, Tinkling, Trilling, Wailing, Whistling and Winding are all names given to cisticolas!  The word cisticola apparently derives from cista, a woven basket and colo, meaning to dwell and refers to the birds’ basket-shaped nests.

We say that there are ‘roughly 50 other species in the genus’ because almost inevitably there isn’t taxonomic unanimity.  For the same reason, we should also say that there about 17 or 18 subspecies of Zitting Cisticola, which is the most widely distributed of the genus, occurring in southern Europe, Africa, southern Asia and northern Australia.  Although there has been a northward expansion of the species range in Europe, they are susceptible to hard winters and there have been only a handful of records in Britain.
Posted by Peter and June at 08:50 No comments:

Our recent visit to the Castro Verde area produced most but not all of the regular species that visitors ask to see.  We didn’t miss many but unfortunately, as the season progresses some species become more difficult to find.  Birds that only a few weeks ago were singing and displaying, defending a territory or trying to attract a mate are now feeding young and trying hard not to draw attention to themselves or their offspring.  At the same time, the grass and other vegetation has grown taller and there are plenty of places to hide away.  It makes our task much harder!

Fortunately, in the same area where those uncooperative Little Bustards are lurking and where the Black-winged Kites have taken their young out of sight, there are four much more easily seen, brightly coloured species that will, at least for a few minutes, brighten anyone’s day.

Our experience is that Hoopoe, European Roller, European Bee-eater and Common Kingfisher are among the most popular birds that we find for our visitors.  Maybe it’s because of their flashy plumage or perhaps simply because they’re all instantly recognisable! 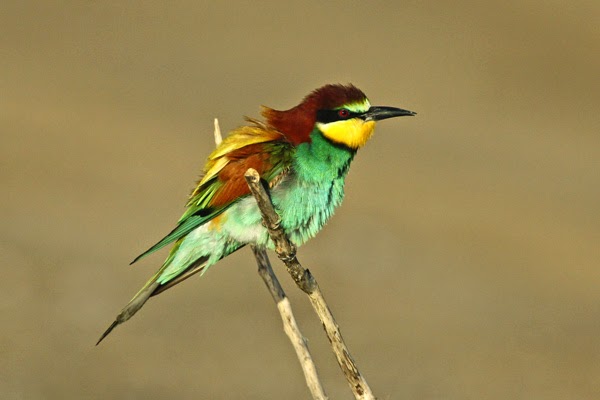 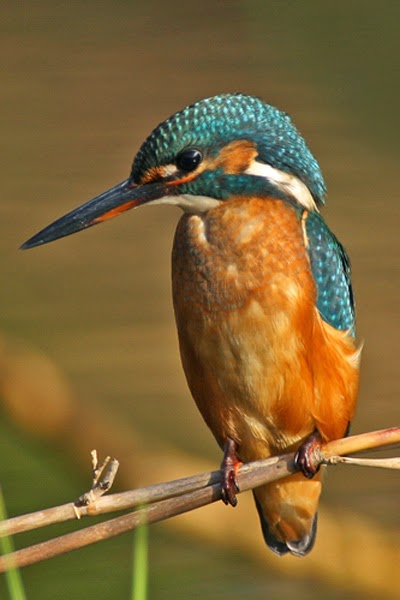 Each of these four species is the only representative of its family to occur in Western Europe other than as a vagrant but they are clearly related to each other and have much in common.  Have you noticed how they always appear bunched together in your checklist between the swifts and the woodpeckers?  And it’s not unusual to see them sharing a page in a field guide! 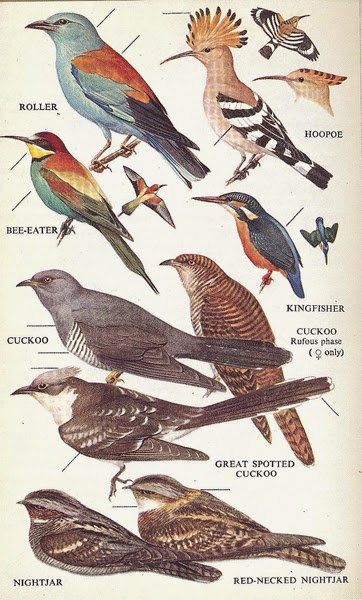 A Field Guide to the Birds of Britain and Europe (Peterson, Mountfort & Hollom) 1954

All four of them nest in cavities; Hoopoes and Rollers like to nest in holes in trees but most of the Rollers we see nest in artificially provided sites and Hoopoes also will occasionally take to nest boxes; Bee-eaters and Kingfishers on the other hand usually excavate a hole in a vertical bank and Bee-eaters will also use a hole in sloping or even flat ground. 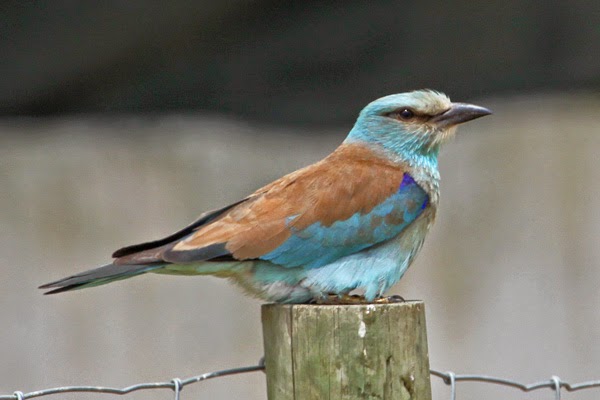 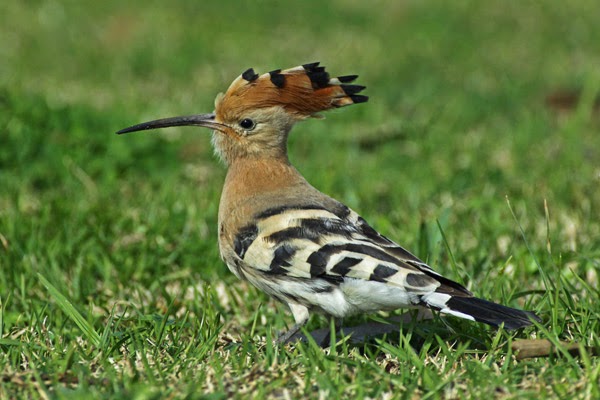 We tend to think of Rollers and Bee-eaters as migrants and Hoopoes and Kingfishers as resident species but that really isn’t the whole story.  It’s true that Rollers and Bee-eaters do spend only the few months of the breeding season in Portugal before heading south to winter in Africa but Hoopoes and Kingfishers also make seasonal movements.  Of course, these movements are less obvious as they don’t involve the whole population; many Hoopoes do leave us during the winter but always some remain.  On the other hand, the number of Kingfishers in the Algarve increases in the autumn as birds arrive from further north and they are commonly seen from September through to February.

If you would like to see all four of these birds during one visit to the Algarve, make sure to plan your trip between late April and August.  Also bear in mind that although Rollers can sometimes be seen as migrants in the Algarve, mainly in the west and in August, they do not breed here and a trip to the Alentejo will usually be necessary to be sure of finding them.
Posted by Peter and June at 18:01 No comments: