There have been only a handful of records in Portugal of Moustached Warbler (Acrocephalus melanapogon) and only two in the Algarve, the last of them in 1998.  So a report of one near Vila Real de Santo António last Wednesday was bound, you might have thought, to result in a big twitch.

However, this has not been the case.  In fact, we have spent more than five hours trying to see this bird and during all that time there have been no more than two other birders present.  For long periods we have been there on our own!

Apart from the fact that there are relatively few resident birders here, it’s not really a time of year when we expect many visiting birders and in any case visitors are not usually bothered to chase local rarities and often are not even aware of them.

Another factor is that the location is in the extreme south-east corner of the country about 300km by road away from Lisbon.  Also, it’s been an extremely difficult bird to see.  Although it has been singing from first light until about 9.00 am, it wasn’t until this morning, on our third visit, that we at last managed a few brief glimpses of it!  Such limited prospects of success don’t really encourage any but the very keenest to embark on a long journey. 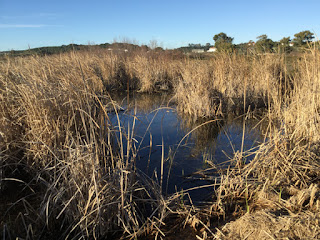 The bird has been singing from within this reed bed. 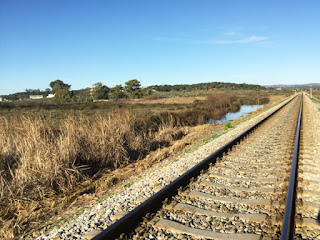 The location is close to the main railway line. 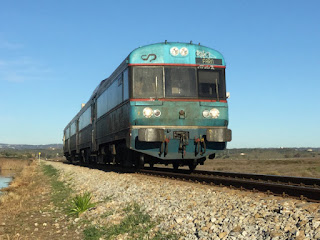 Something for the trainspotters!

The site is a wetland close to the Castro Marim Nature Reserve and immediately adjacent to the main railway line that serves the Algarve.  Fortunately, for us it has required a drive of only 20 minutes.  Early mornings have been chilly and sometimes breezy but it’s been sunny and generally quite pleasant and while we’ve been waiting for the bird to show itself there have been plenty of other species to see.  Our bird list from this one spot has included Greylag Geese, Greater Flamingo, Red-crested Pochard, Water Rail, Marsh Harrier, Common Buzzard, Booted Eagle, Osprey, Western Swamphen, Glossy Ibis, Great Egret, Caspian Tern, Water Pipit, Black-winged Stilt, Greenshank and Green Sandpiper.  Numerous Common Chiffchaffs have been hawking insects around the reeds and tamarisks and Barn Swallows and a few House Martins have joined with the many Crag Martins finding food overhead.

Sadly, we have no photographs of the bird but this was an occasion when even seeing it was an achievement.  If you are unfamiliar with Moustached Warbler, it can best be described as a Sedge Warbler lookalike.  It is actually very slightly bigger than Sedge Warbler and has a whiter supercilium.  Its song, with which we became quite familiar, is typical of an Acrocephalus warbler and similar to both Reed and Sedge Warblers but includes some Nightingale-like whistling notes.

How long it has been present is impossible to say.  The site isn’t one that any birder visits regularly and it’s amazing that the bird was found at all let alone identified.  Credit for this goes to Rui Rufino and Ricardo Silva whose first report suggested there might actually be two birds present although we haven’t seen any evidence for that ourselves.

It isn’t hard to imagine the crowds that would turn up to see a Moustached Warbler in the UK.  In the past, the species has been the subject of controversy and is no longer on the British list.  You can read about that here.  Anyway, we dread the thought of trying to manage a twitch next to the unfenced railway line!