We're currently taking a break from the heat of the Algarve, spending some time in the cool and damp UK! Forecast high temperatures today are 31° in Tavira and 16° in Stafford, so already we're wondering whether we've made the right decision.

Remarkably, our visit to Stafford has coincided with the occurrence of two rare birds locally: an adult Franklin's Gull at Chasewater and a juvenile Cattle Egret at Doxey Marshes Nature Reserve. To have any sort of rare bird in Staffordshire is in itself something of a rarity, so having two here at the same time, and in July, really is unusual.

The Franklin's Gull was seen regularly at Chasewater for more than a week, mostly in the evenings, flying in to roost. Where it was spending its days was anyone's guess. Anyway, it hasn't been seen since Saturday, so has presumably moved on. The only previous record of this species in Staffordshire was at Blithfield Reservoir in August 2006. The Cattle Egret on the other hand, only the third for Staffordshire, seems to have settled in at Doxey. 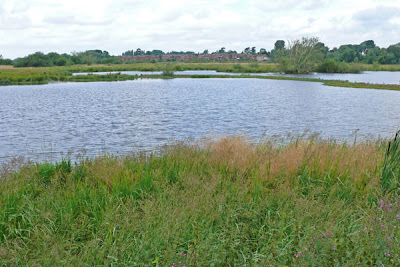 Doxey Marshes
Of course, Cattle Egrets are very common birds in many parts of the world that we visit regularly. Quite often, in Costa Rica for instance, we have seen them in flocks of hundreds and in Portugal we have only to look out of the window most evenings to see scores of them flying to roost. So why, you may well ask, were we there on Doxey Marshes yesterday evening waiting for a very brief view of just a single bird flying across the reserve? It doesn't make much sense, does it? Really it doesn't! There wasn't even a chance to photograph it. The only excuse we can offer is that the reserve is less than a mile away and it was a welcome opportunity to get some exercise.
Posted by Peter and June at 15:53 No comments:

Without doubt, Castro Marim is one of our favourite sites in the Algarve and it's one we visit pretty regularly. However, the Reserva Natural do Sapal de Castro Marim e Vila Real de Santo António (to give it its full title) covers a huge area and at this time of year, when the temperature can be approaching 30 degrees by 10.00am, we're not inclined to cover all of it in one day. This morning we gave it about two and a half hours before retreating into some shade.

Although much of that time was spent taking photographs (how many flight shots of Spoonbills do we really need?) and trying to read colour-rings, we managed to dig out about 50 species with minimum effort. 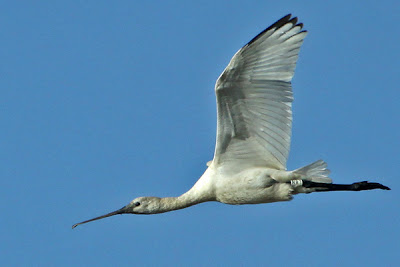 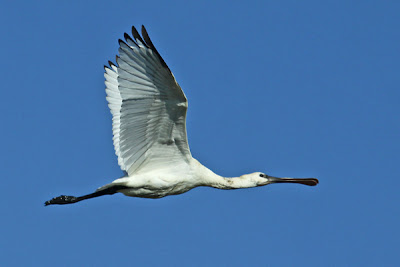 The only real surprise was a Black-crowned Night Heron, a species that seems to be occurring more frequently in the Algarve and will surely be breeding here soon if it isn't already. 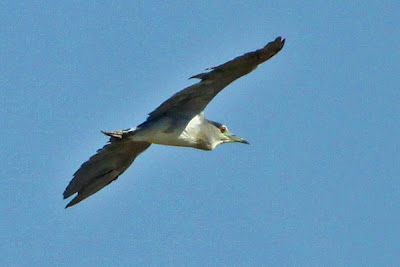 Amonst the gulls, we found about a dozen each of Slender-billed and Audouin's. (For some reason, the largest concentration of Audouin's in the area currently is at Santa Luzia where 268 were reported this morning.)

As well as the resident Kentish Plovers, Avocets and Black-winged Stilts, a few returning waders were in evidence including Dunlins and Black-tailed Godwits, a couple of Little Ringed Plovers, a Common Sandpiper and (our favourites) two Green Sandpipers. 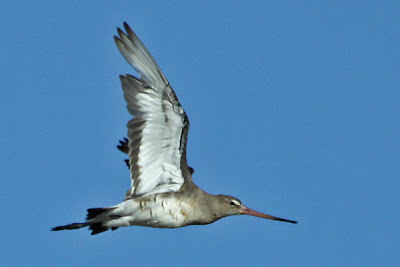 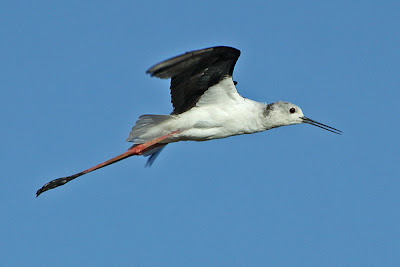 Not many raptors were seen but we had several sightings of what was presumably the same male Montagu's Harrier, plus Common Buzzard and Common Kestrel.

One species that we particularly looked for was Common Magpie and eventually we found two rather bedraggled-looking birds. As we had hoped, these Magpies were feeding two well-grown Great Spotted Cuckoos. The Cuckoos looked as though they should have been well capable of fending for themselves, but why would they when their foster parents were so attentive. No wonder the Magpies looked worn out!

All in all, some pretty decent birding. We are no longer surprised that we didn't see another birder the whole time we were there.
Posted by Peter and June at 18:36 No comments:

Yesterday's visit to Quinta do Lago was for no other reason than we hadn't been there for quite a while. As it was, the morning's bird list contained few surprises but the chance to photograph Little Bitterns made the trip worthwhile even if the results weren't great in the very harsh sunlight. 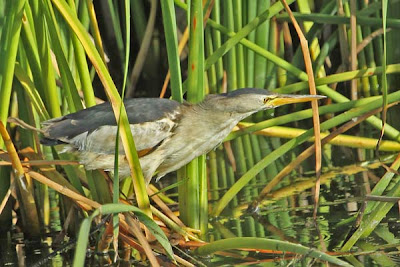 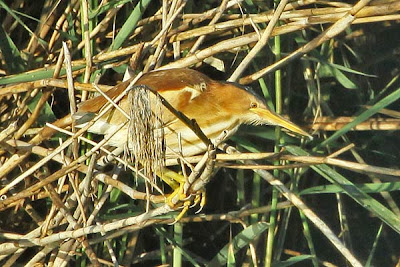 It was difficult to resist also pointing the camera at the Black-headed Weavers, a species that surprises and often puzzles first-time visitors here. An African species introduced to Portugal and now a well-established breeding bird, Ploceus melanocephalus is also referred to by some authors (e.g. Stevenson & Fanshawe, Field Guide to the Birds of East Africa) as Yellow-backed Weaver. The fact that the name Black-headed Weaver is also sometimes given to Ploceus cucullatus, better known as Village Weaver, adds to the confusion! 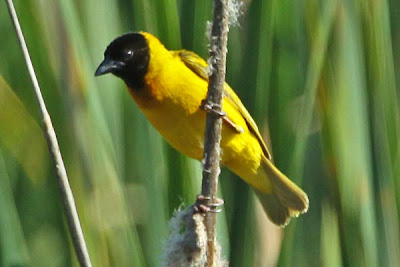 Some time ago we had a long debate in the hide at Quinta do Lago with a visiting 'expert' who knew for certain these birds couldn't be weavers of any sort because they were definitely Black-headed Buntings which he 'was very familiar with' after seeing them on his trip to Lesvos! Nothing we could say would persuade him...

If there was any sort of surprise for us yesterday it was the flock of 26 Glossy Ibises that flew over, following the coast. Perhaps they'll end up at Lagoa dos Salgados or maybe some inland ricefields.

At 10.00am, with the temperature approaching 30 degrees, we figured it was time to head for some shade!
Posted by Peter and June at 12:00 No comments:

We were in the Castro Verde / Mértola area again yesterday and enjoyed another reasonably successful day in spite of a much later start than we would have liked. Great Bustards, always one of the main targets, now have well-grown young but they can be hard to find and, even after a lot of searching in the usual places, the total number seen was in single figures. Little Bustards are currently even more difficult to see well.

Raptors, on the other hand, were show-offs! Montagu's Harriers, Marsh Harriers, Black Kites, Short-toed Eagles, Booted Eagles, Common Buzzards and Lesser Kestrels would have been hard to miss. 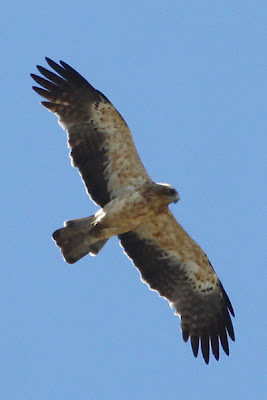 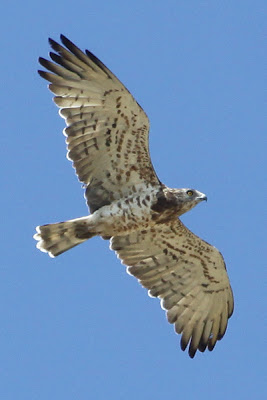 Short-toed Eagle
Golden Orioles, Tawny Pipits, Rufous-tailed Scrub-Robins, Collared Pratincoles, Rollers, a single Purple Heron and even Kingfishers and Little Owls were amongst the day's most popular species but, with the temperature around 36 degrees, finding and showing any birds at all had became a bit of a challenge by mid-morning!
Posted by Peter and June at 09:43 No comments:

Swifts by name, swift by nature

At the beginning of June last year, we posted some photographs of Pallid Swifts that we had taken here in the centre of Tavira. This morning we went into the town for another session with these remarkable birds.

If any family of birds is appropriately named, it's the Apodidae, the swifts. Having upgraded to a Canon EOS 50D since last year we felt better equipped to try and get some flight shots but still found it incredibly difficult; the speed of these birds is simply amazing and their line of flight often completely unpredictable. 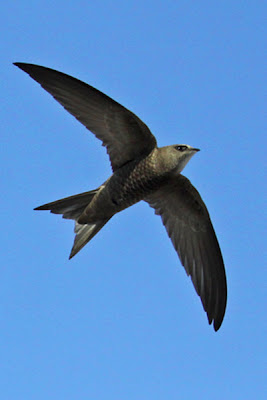 Pallid Swifts usually nest under the eaves of buildings or in a hole in a wall; sometimes they will use a cave or a cliff crevice. Birds of the Western Paleacrtic lists only two instances of them nesting in holes in palm trees: in Algeria and in Portugal. The Portuguese reference is to 'our birds' in Tavira. 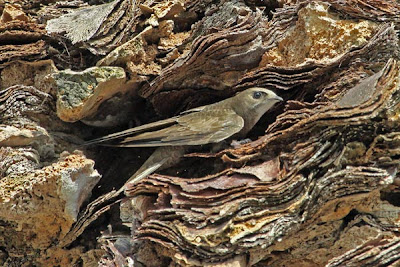 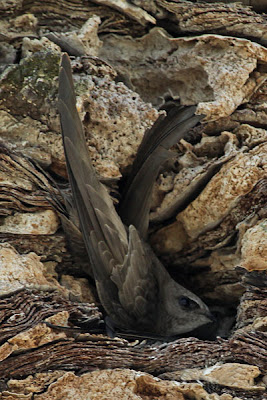 We were a month later than last year and this morning there was a frenzy of activity as uncountable numbers of birds were feeding young in the nests. 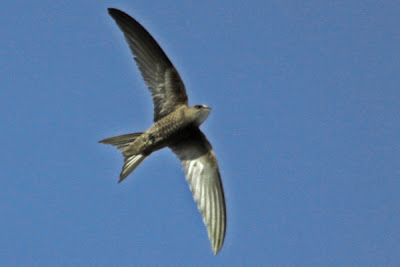