Both ends and some in the middle

We chose to make our base here in Tavira not just because it's the most attractive town in the Algarve but also because its geographical location gives us easy access to quite a number of good birding sites not too far away. We can also easily make trips to the Alentejo to the north and to Doñana across the border in Spain.  However, it’s a long way from Sagres and at this time of the year there's no denying that it is the Sagres area in the extreme west of the Algarve that has the greatest potential when it comes to seeing migrating raptors and it is also the place to see Red-billed Choughs, Dotterels and scarce passerines such as Ortolan Buntings. 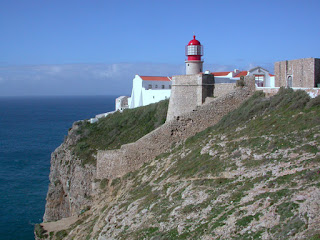 On Wednesday of this week we made our first trip of the autumn to Sagres.  The lighthouse at Cape St. Vincent is the southwesternmost tip of mainland Europe and to get there from Tavira requires a drive of 150km each way.  It's a journey that we will no doubt be making on several occasions in the coming weeks.  We are grateful for the A22 Via do Infante de Sagres, the motorway that takes us most of the way there although like most people here we do rather resent paying the tolls that were introduced in 2011!

Our first birding of the day was in a small wooded area not far from the town of Sagres where in the trees we quickly found both Pied & Spotted Flycatchers, a Subalpine Warbler and several Chiffchaffs, while overhead a pale morph Booted Eagle circled.  This was certainly a promising start and we were encouraged to think that there might be more migrants to come as we made our along the peninsula towards the lighthouse.

Just then the phone announced the arrival of a text message!  At times like this when you are in a remote part of the Algarve you hope it's going to be a message urging you to shop at one of the local supermarkets, Jumbo or Continente, but no, instead it was news we didn’t really want.  A rarity, a Marsh Sandpiper, had been found at Castro Marim, a two-hour drive away near the border with Spain.  What could we do about it?  There was only one thing to do - ignore it!

We carried on birding, checking out the coastal bushes and finding a Wryneck, a couple of Whinchats, more Chiffchaffs and a Willow Warbler. A Blue Rock Thrush was perched on a ruin.  We saw Rock Doves and Black Redstart on the cliffs, an Iberian Grey Shrike and a couple of Ortolan Buntings but sadly there was little in the way of seabird passage other than some very distant Gannets and Cory's Shearwaters.

Eventually we made it to Cabranosa, the popular raptor watch point, where a small group of birders were gathered, some of them well known to us.  Apparently there had been a few Honey Buzzards earlier and it wasn't long before we saw two or three more Booted Eagles and a Common Buzzard but clearly it wasn't looking like a great day for raptor passage.  We stopped there for half an hour or so during which time we were rewarded with a Short-toed Eagle directly overhead, an Egyptian Vulture and briefly a Honey Buzzard but then we decided that our time would be better spent elsewhere. 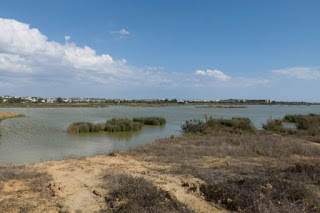 We headed for Lagoa dos Salgados, one of the Algarve’s best birding sites, confident that we would find more birds there.  It is a much more reliable area these days but in spite of all the work that has been carried out in the last year or two there is still room for further improvement.  In particular it would be nice to see better control over the water level which was somewhat higher than we might have wanted with little or no muddy margins showing.  However, there are some small pools of shallow water suitable for waders and we soon found the two Pectoral Sandpipers that have been there for two weeks or more. With them were Curlew, Green & Wood Sandpipers, a Little Stint, Dunlins and several Ruffs.  On the islands there were hundreds of loafing Yellow-legged Gulls and a few Cormorants; Spoonbills, Glossy Ibises, a Greater Flamingo and a couple of Purple Swamp-hens were also soon found. A Northern Wheatear flew down the track ahead of us, perching from time to time on a fence post.

From Salgados we went to spend the last hour of the birding day at Quinta do Lago. From the hide there we watched Little Bitterns, Purple Swamp-hens, Black-headed Weavers, Kingfishers, Little & Great Crested Grebes and a flock of gulls that included a few Meds and a dozen or more Audouin's.  We were in the hide watching a dispute between two Little Bitterns when one of them broke away and flew a short distance landing in the lagoon.  It then proceeded to swim to the nearest stand of rushes about 20/25 metres away.  We have never before seen a Little Bittern take to the water and swim like this and it isn’t something that we can find recorded in the literature.  We have found a report of a Little Bittern swimming on a canal near Exeter in the UK in March 2002 but that was a bird that was said to be in very poor condition and it died the following day after being taken into care.  Our bird appeared to be perfectly healthy and as far as we could tell resumed its normal activity once out of the water. 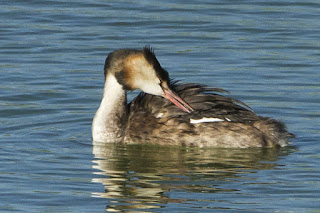 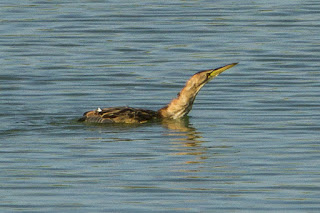 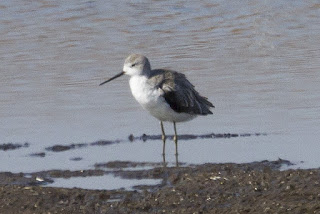 The following morning there was only one place we were going to be and that was Castro Marim where the Marsh Sandpiper was easily located in a mixed flock of waders that included Black-tailed Godwits, Avocets, Common Redshanks, Dunlins and Ringed Plovers.  Although it’s classed as a rarity, Marsh Sandpiper occurs here most years and Castro Marim is the most likely place to find one.  It must be possible that some records have involved birds returning in successive years although that’s hard to prove.  An Osprey and several Caspian Terns were also present.
Posted by Peter and June at 23:42 No comments:

We're now settled back into our routine here in the Algarve and we've just  enjoyed an excellent week of birding. Migrants are on the move, it's been a particularly good week to see eagles and there's been much more besides. 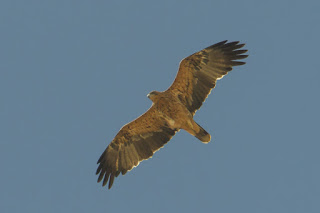 Our two visits to the Castro Verde area in the Baixo Alentejo gave us multiple sightings of Short-toed, Bonelli's, Golden & Spanish Imperial Eagles - enough to make anyone's day!  It would have been nice to have come across the Steppe Eagle that has recently been reported but maybe that was too much to ask for.  Other raptors we did see up there included Black-winged Kites, Griffon Vultures and Eurasian Black Vultures so there were no complaints. 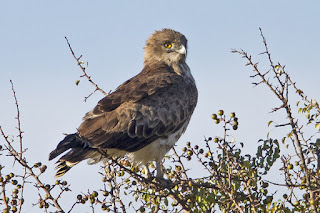 As usual at this time of the year, Great Bustards were relatively few and we failed to find any Little Bustards at all.  In an area where hundreds of them nest, there wasn't a White Stork to be seen but we watched a party of seven Black Storks over São Marcos da Ataboeira.  Most of the summer visitors such as Golden Orioles, Collared Pratincoles, Bee-eaters and Rollers have left but a couple of Black-eared Wheatears remained.

After a scorching hot summer the plains are baked dry and for many birds food must be scarce.  Most of the rivers and streams are now dry but there are quite a number of ponds and small reservoirs that still contain some water.  Green Sandpipers and Common Snipe winter around these reservoirs and both species are already in residence. A few passage waders also occur at these waters and we found Dunlin, Common Sandpiper, Greenshank and Ringed Plover.  We also saw Greater Flamingos and Spoonbills which somehow seem a little out of place here away from the coastal wetlands. 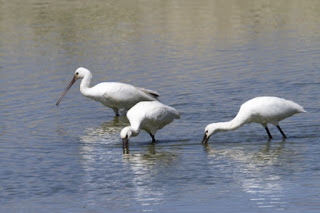 The eagles we saw in the Algarve were of course Booted Eagles, several of them at a regular site with two Black-winged Kites roosting nearby.  At Quinta do Lago, Little Bitterns, Glossy Ibises and Purple Swamp-hens were easy to see and a Water Rail made a brief appearance.  At Santa Luzia a juvenile Red-necked Phalarope brought to 25 the number of wader species recorded during the week; Audouin's & Slender-billed Gulls were also there.  At Olhão there were Mediterranean Gulls plus Caspian, Little, Common & Sandwich Terns and near Tavira we found what is presumed to be a hybrid Little x Western Reef Egret, a bird that has been in the area for several weeks. 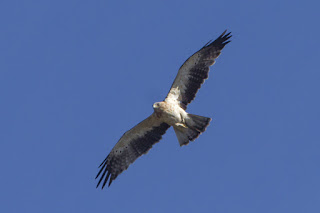 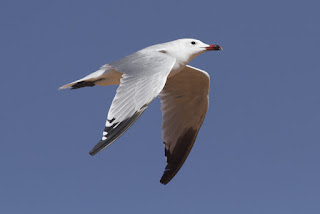 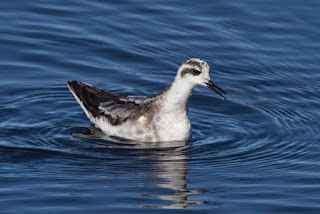 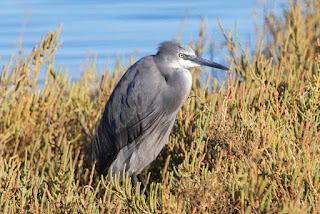 An adult Spanish Imperial Eagle was our main reward for making the long trip to the Doñana area in neighbouring Spain.  There were also several Booted Eagles.  Again here it was a matter of finding some water in order to find a few birds as the whole place was parched dry and unrecognisable compared to how we see it in the spring and early summer. A few Black Storks, Great Egrets and Night Herons were seen as well as numerous Grey Herons, Cattle & Little Egrets but apart from Green Sandpipers and Black-winged Stilts there few waders and the day was generally disappointing. 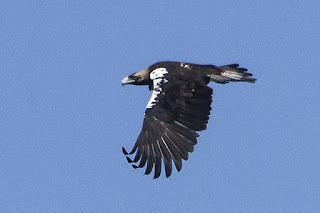 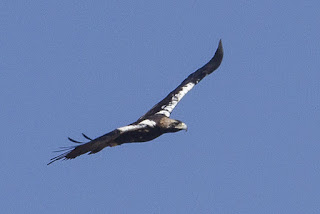 Everywhere we have been there have been at least a few passerine migrants, including Common Whitethroat, Northern Wheatears, Whinchats, Tawny Pipits, Pied  & Spotted Flycatchers, Chiffchaffs, Willow & Subalpine Warblers and Common Redstarts and we can expect more of the same during the coming weeks.  Maybe this will be the year for another North American passerine - we can but hope! 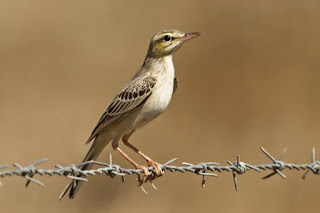 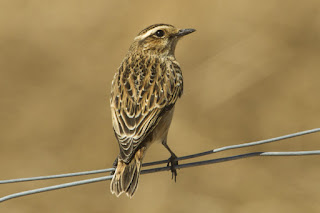 Whinchat
Posted by Peter and June at 23:21 No comments:

Back for the autumn migration

It’s great to be back in the Algarve!  The months of June, July and August in the UK didn’t seem to include summer but now at last we’re warm again.

It’s also good to be back in Tavira - nearly all of the guide books describe it as the most attractive town in the Algarve and we wouldn’t disagree with that. 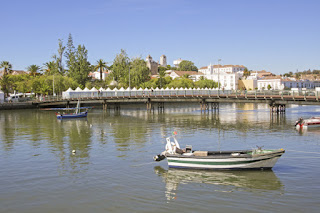 The Gilão River in the centre of Tavira

Already we’ve spent a few hours checking out nearby areas of the Ria Formosa and it’s wonderful to have this huge wetland virtually on our doorstep.  Those saltpans around Tavira and Santa Luzia that aren’t being used to produce salt are currently attracting hundreds of birds: Greater Flamingos, Grey Herons, Little Egrets, Spoonbills, more than 20 wader species, at least five different gulls as well as various ducks.

September and October are months when we can expect a few rarities to show up amongst the huge numbers of migrant birds that pour in here and already there have been a couple of Pectoral Sandpipers further west at Lagoa dos Salgados.  It can’t be denied that rarities add a bit of spice to our birding but there’s a great deal of interest and pleasure to be had from watching almost any birds especially those waders!

We hope to share photographs here in the coming weeks of at least one or two rarities but in the meantime here are a few taken this week just down the road in the area we like to think of as “our office”. 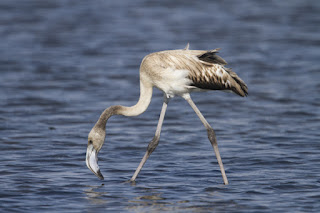 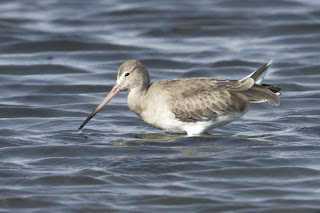 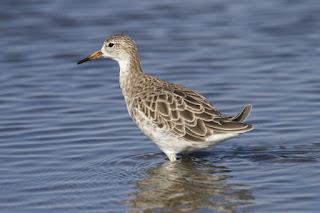 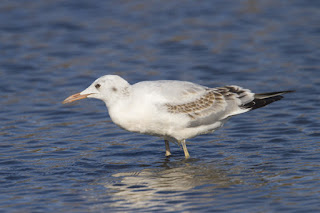 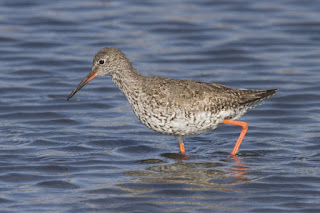 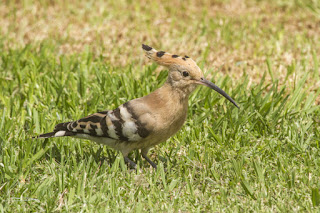