When I mentioned that I was going to Colombia again, several people seemed surprised and replied asking whether it was safe to do so. They were automatically associating Colombia with the drug trade, kidnapping and guerrilla groups such as FARC. Understandable maybe given the country’s troubled history but it’s definitely an out-dated view. Whilst it’s true that there are still some parts of the country that are best avoided and that these problems have not gone away entirely, the last ten years have seen the situation improve considerably. 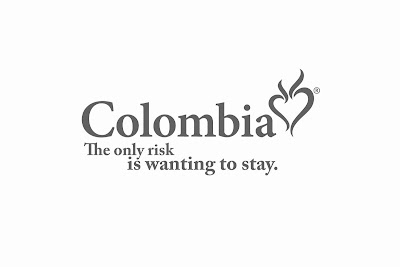 The only risk is wanting to stay. This slogan currently being used to promote tourism in Colombia acknowledges the concerns that people still have about security and safety issues. For me, however, there is another risk: the risk that having been once to this wonderful country, you will want to return at every opportunity!

Colombia is located in the north of South America, straddling the Equator, and has borders with Ecuador, Peru, Venezuela, Panama and Brazil. It is dominated by the Andes mountain range and also includes parts of the Amazon and Orinoco River Basins. The scenery is stunning and diverse – snow-capped peaks, glaciers, tropical rainforest, 600 miles of coastline and more.

The people are friendly and hospitable, there is good quality accommodation and food.

And, of course, Colombia has more bird species than any other country in the world! The actual total is a regularly changing number as a result of taxonomic studies and the occasional new discovery, but it currently stands at around 1,880. For the travelling birder it really is the must-visit destination.

And so I had no hesitation in accepting an invitation from PROEXPORT COLOMBIA, the country's tourism agency, to travel to the capital city, Bogotá, for Colombia Travel Mart 2011. This is a business trip but then our business is birding so it has included several days before the main event when I have been able to see several reserve areas and lots of birds and to meet several of the country’s top birding guides.

My companions on this trip have been Byron Palacios, originally from Ecuador but now based in the UK, and Jim Wittenberger and Laura Fellows from Colorado, USA. Throughout we were accompanied by locally-based birding guide, Diana Balcázar.

I am still in Bogotá but more details of my trip will follow soon on my return to Europe...
Posted by Peter and June at 16:12 3 comments:

Email ThisBlogThis!Share to TwitterShare to FacebookShare to Pinterest
Labels: Colombia

Yesterday we had a successful trip to Sagres where, in the harbour, we easily found the long-staying Rock Pipit and at least two, maybe three, Purple Sandpipers. 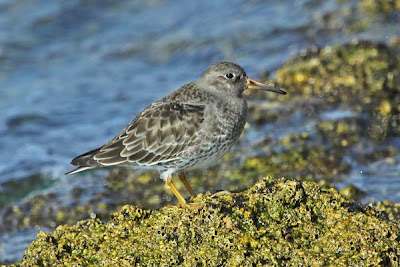 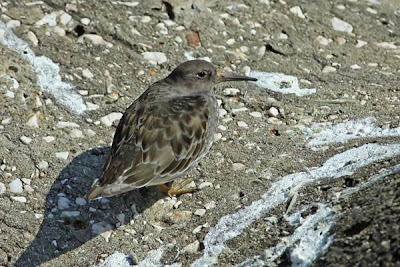 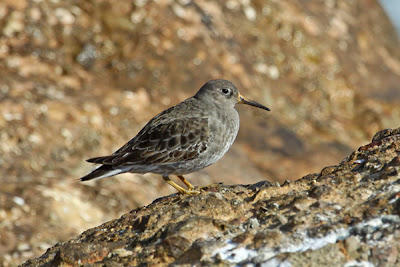 Rock Pipit is a rarity in Portugal and there have been few previous records in the Algarve. Purple Sandpiper, too, is a scarce bird here. However, both species have occurred previously at Sagres (although maybe not at the same time!) and that’s definitely the place to look for them.

There has been some discussion about the origin of the Rock Pipit. On the basis that the British and Irish race petrosus is thought to be mainly sedentary and that petrosus and the Fenno-Scandian race littoralis are said to be inseparable in winter plumage, we have to conclude that it is very likely to be a littoralis. Exactly where it is from is another question.

There have actually been reports of two Rock Pipits being present but at no time did we see more than one. Having said that, maybe our photographs confirm that there are two individuals - what do you think? 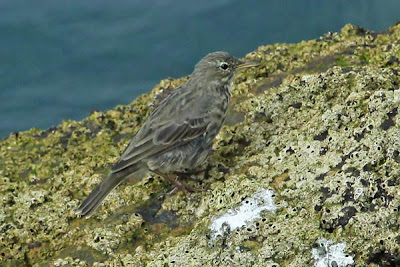 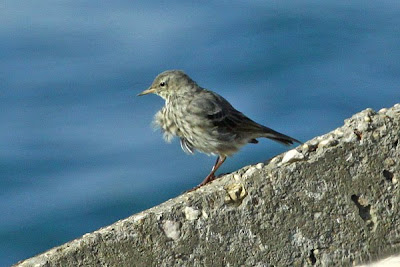 Although we concentrated our efforts on photographing these two main attractions, it was hard to resist other species that took up photogenic poses on the lichen-covered rocks. 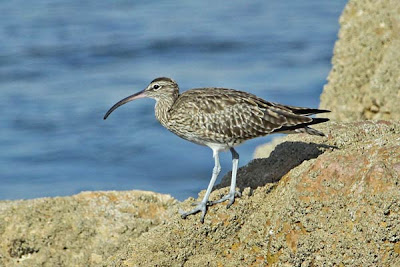 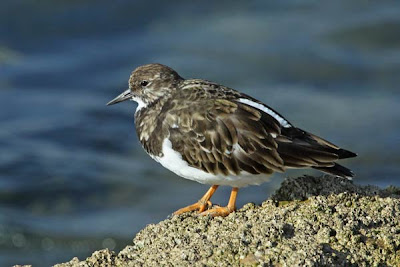 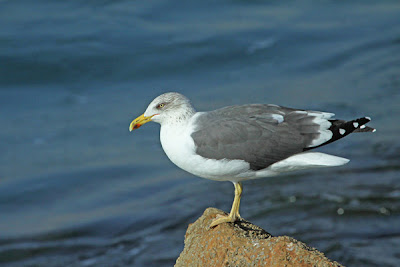 Lesser Black-backed Gull
Later we headed off towards nearby Cabo de São Vicente where we enjoyed something of a ‘turdus fest’ with multiple Fieldfares, Ring Ouzels, Mistle Thrushes, Song Thrushes and Blackbirds and a single Blue Rock Thrush.

All in all, a good day’s birding – and the weather, once again, was perfect!
Posted by Peter and June at 21:08 No comments:

High on the wanted list of most first-time visitors to Iberia is Azure-winged Magpie, a species which, fortunately, is very easy to see here. And what an attractive and elegant bird it is with its blue tail as well as azure wings. 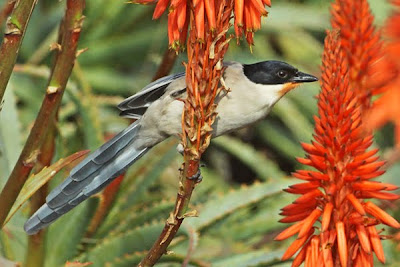 However, it is a species that provokes both argument and debate. To start with, should we really still be calling it Azure-winged Magpie? Or should we now refer to it as Iberian Magpie?

The long-held view has been that Azure-winged Magpie Cyanopica cyanus is a species with a remarkable disjunct distribution with populations in the Far East (China, Japan, Korea, etc) and also in Spain and Portugal. That does seem very strange but it has been suggested that it results from birds being introduced into Iberia by Portuguese sailors returning from the Far East something like 500 years ago. That makes sense and it has certainly been a widely accepted explanation. Others have suggested the less likely scenario which had those same sailors taking birds from here and introducing them into China or Japan! Another theory is that the species originally had a much wider and continuous distribution and that the two current, separated populations are simply what remains after the loss of birds from the central part of the range as a result of the Pleistocene glaciations. 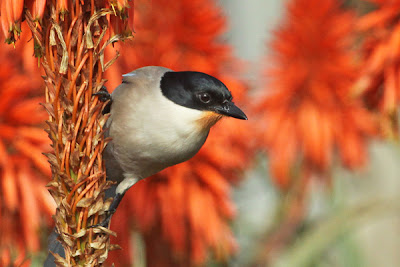 Towards the end of the last century the discovery in cave deposits in Gibraltar of fossilised Azure-winged Magpie bones that were said to be more than 44,000 years old seemed to provide pretty convincing evidence that the species is native to Western Europe and not a recent introduction.

Genetic and morphometric analyses followed (read them here and here if you’re so inclined) which showed a clear distinction between the two populations and so it is that the list of the world’s birds produced for the International Ornithological Congress includes two species, Azure-winged Magpie Cyanopica cyanus, the Far East birds, and Iberian Magpie Cyanopica cooki , the much smaller population in Spain and Portugal. Incidentally, the stated purpose of producing this list was “to facilitate worldwide communication in ornithology and conservation through the consistent use of English names linked to current species taxonomy.” 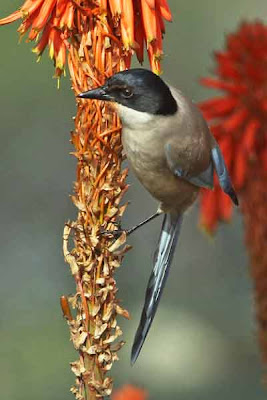 So that, you might think, has settled the debate. The species has been split into two and we all know where we stand. Well, not quite! Switch now to Birdlife International, another respected authority in the world of ornithology and you will find that their Taxonomic Working Group are having none of this! They do not accept the proposed split into two species and continue to treat Cyanopica cyanus as a species with two separate populations roughly 9,000km apart. In other words, as far as they are concerned, we’re back where we started. Apparently they don’t regard the genetic and morphological differences that have been documented to be sufficient to treat the two populations as separate species. Also, there does seem to be some lingering doubt about the identification of those bones in Gibraltar! 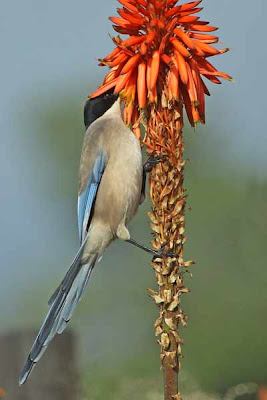 So here in Portugal (and in Spain), what do we have, an endemic species that we should appreciate and protect or an introduced species that is on a par here with Common Waxbill and Black-headed Weaver? Does it matter? Well it does start to be an issue as the number of birds and their range increases. Just as with Common Magpie in the UK, there are now people ready to blame the predations of Azure-winged Magpies for perceived reductions in the numbers of breeding and wintering songbirds. If it were true (and that’s a huge IF) that Azure-winged Magpies are having a serious effect on the populations of small passerines, what should our attitude towards them be? Will they, like Common Magpies in the UK, become demonised and blamed for all the world’s ills or will they remain the attractive, restricted-range species (or perhaps sub-species) that all of our visitors enjoy?
Posted by Peter and June at 18:54 No comments:

Small numbers of Alpine Accentors are regularly seen during the winter months near the lighthouse at Cabo de São Vicente. On Sunday, there were five birds present, the same number that we saw in the 2006/07 winter and the most we have ever seen there. 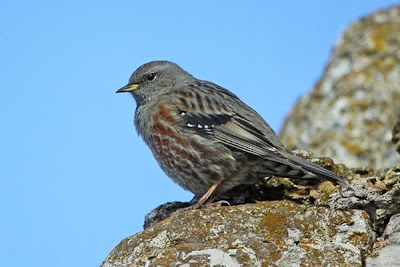 Where do they come from? Spain seems the most likely but why, if there are tens of thousands of them breeding there and they are said to be mainly short-distance altitudinal migrants, do we regularly get just a handful here? Maybe there are lots more scattered around less well-visited sites in Portugal.

Alpine Accentors are polygynandrous, that is to say that they live in small groups in which the males mate with several females and the females mate with several males. It sounds complicated! It is said that males will provide food to chicks at several nests within the group, depending on whether they have mated with the female or not and that they only provide care when they are likely to be the true fathers of the chicks.