We recently returned from leading an Avian Adventures tour in Bulgaria and Romania where Dimiter Georgiev of Neophron Tours was our local driver/guide.  We took a British Airways flight from Heathrow Terminal 5 to Sofia and then spent three nights at Kraimorie and three nights at Kavarna before crossing into Romania for some birding around the Danube Delta and then a return flight from Bucharest. 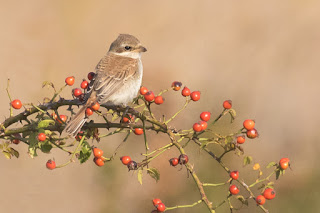 Kraimorie was a convenient base for two days birding around the Burgas Lakes.  We divided our time in that area mostly between Lakes Vaya, Mandrensko, Atanasovsko & Pomorie and Poroy Reservoir.  From Kavarna, we visited Durankulak Lake and Shabla Tuzla Lake, Cape Kaliakra and areas of nearby steppe grassland.

Not surprisingly, we saw an impressive variety of wetland birds that included Great White & Dalmatian Pelicans, Ferruginous Duck, Pygmy Cormorant, Squacco Heron, White Stork, Gull-billed, Caspian & Whiskered Terns, Slender-billed & Caspian Gulls, Kentish Plover and Broad-billed Sandpiper.  The downside was that water levels were generally low and as a result birds were mostly further away than we would have liked.  Certainly, opportunities for photography were very few. 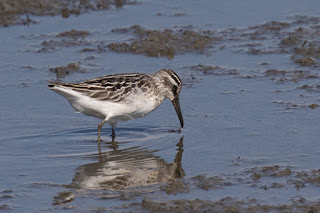 We also managed to see a good variety of raptors including Lesser Spotted, Short-toed, Booted & Eastern Imperial Eagles, Hobbys, Common & Long-legged Buzzards, Marsh Harrier, Eurasian & Levant Sparrowhawks and Red-footed Falcon.  Mostly, however, these were in quite small numbers and we missed out on any raptor migration ‘spectacle’ that we might have wished for. 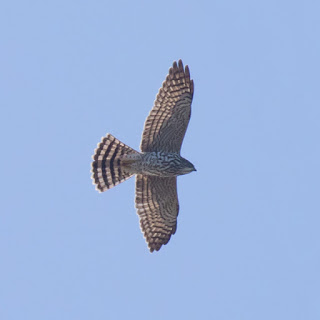 Levant Sparrowhawk - a 'lifer' for both of us 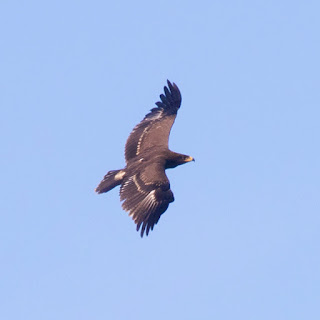 September is probably not the best time of year to see woodpeckers but June’s particular interest was satisfied by the Black, Syrian & Middle Spotted varieties that we don’t get to see very often.  Other highlights were Sombre Tit, Yelkouan Shearwater, Corncrake, European Rollers, European Bee-eaters, Eurasian Eagle Owl, Red-breasted Flycatcher and, a sign of the times – European Turtle Dove.  It was also good to see so many Red-backed Shrikes almost everywhere we went.

Early one morning we visited a ringing camp and got to see several birds in the hand, notably Marsh, European Reed & Great Reed Warblers, Spanish Sparrow and Red-backed Shrike.  However, few birds had been trapped and migration generally was probably affected by the weather, which for most of the week was unseasonably warm with temperatures often exceeding 30°C. 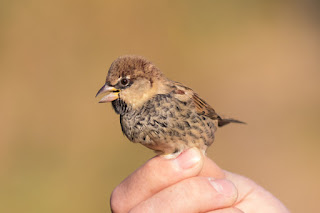 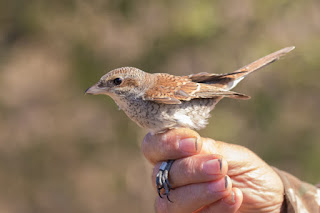 Although the week was mostly spent in Bulgaria, for the last day and a half we crossed into Romania with an overnight stay at Sinoe.  This gave us an opportunity to sample just a very small part of Europe’s largest wetland, the Danube Delta.  Undoubtedly the highlights here were the Red-footed Falcons.  We were pleased enough to see at least 50 or so late in the afternoon of our arrival and then the following morning in a different area there were at least 250. 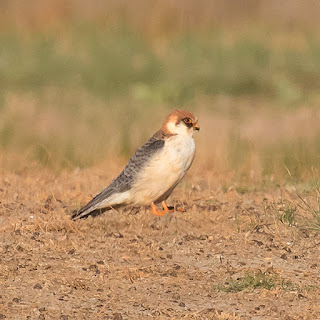 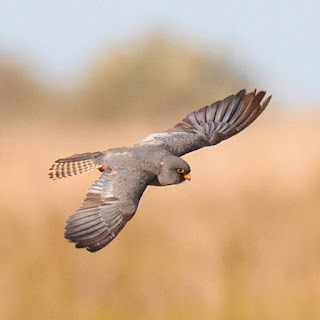 As with all tours that are aimed at seeing birds on migration there is a certain amount of luck involved with both the timing and the weather.  Certainly, the cloudless skies and high temperatures during our week didn’t enhance our birding experience.  Low water levels were also far from ideal.  Nevertheless we did manage to see more than 150 bird species and everyone had at least one or two ‘lifers’.  It's a tour we will look forward to repeating. 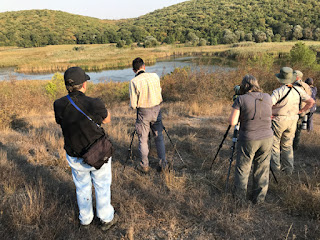 Simultaneously looking for crakes and raptors! 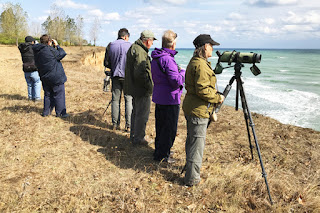 Now looking out over the Black Sea for shearwaters 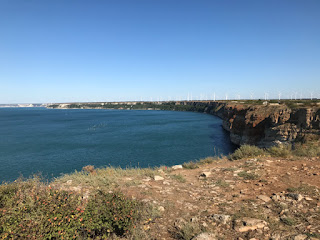 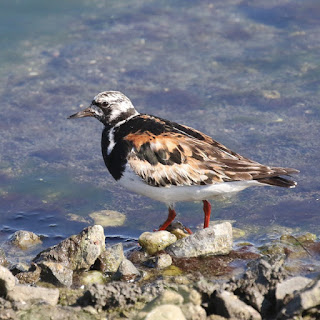 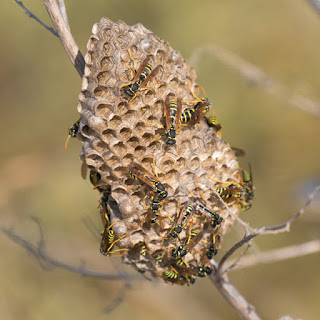 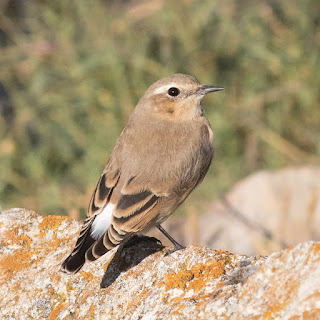 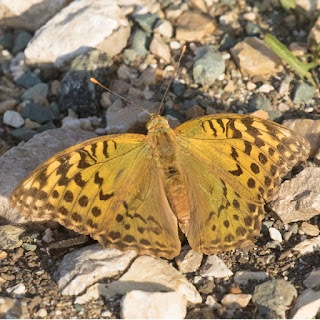 Cardinal butterfly
Posted by Peter and June at 12:08 No comments: