The familiar calls of House Martins were a welcome sound that greeted us when we stepped outside yesterday morning. We’ve been seeing a few birds over wetland areas this last week or so but yesterday’s were the first that we’ve seen around home. 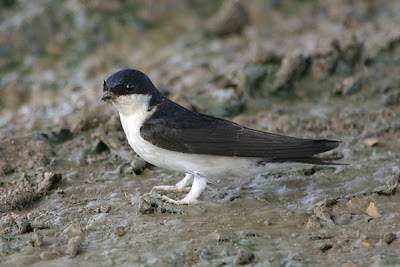 In our previous winters here, at least a few House Martins have stayed around here through January and by early February they have been a fairly common sight returning to their nests. In fact last year our first around home were on 27th January. This year we’ve gone weeks without seeing any at all and even now their numbers are very few.

With no significant amount of rain falling here for quite some time we would assume that this must be having an impact on the food supply available to House Martins in the form of flying insects. Perhaps their absence is simply because there is insufficient food. It has been estimated that a House Martin may eat up to 3,000 flies each day! 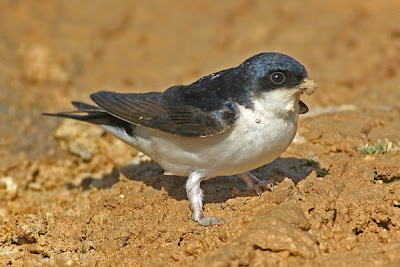 Another result of the very dry winter is that the ground is baked hard and unless we get some rain these birds are clearly going to face a challenge in finding fresh mud for nest-building. Repairing a previous year's nest would be the easy option for them, perhaps taking no more than a couple of days but if starting from scratch they can take up to 18 days to build a new one.

It was a little disappointing that yesterday’s return of House Martins should prompt someone to put a leaflet in our letterbox (and presumably every other letterbox in the area) offering ‘professional help’ in deterring them from nesting. There’s no escaping the fact that breeding House Matins do make a mess and we can accept that preventing them from nesting is much better than knocking down their nests later on after all their effort in building them. However, it does seem a shame that there should be this immediate adverse reaction when we ourselves were so pleased to hear those buzzing pr-prt calls.
Posted by Peter and June at 08:57 No comments:

Our visit to the Castro Verde area yesterday was our first of the year. The morning was bright and sunny and warmer than we expected but cloud built up later and back here in the Algarve we ended up having some rain overnight.

Although early migrants such as Barn Swallow and Great Spotted Cuckoo may have led us to think that spring has arrived, we were still able to find Common Cranes and flocks of Corn Buntings, Meadow Pipits, Northern Lapwings and Golden Plovers all provided further evidence that it is still very much winter. 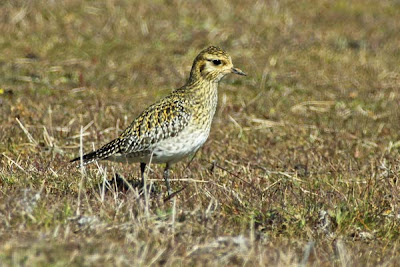 European Golden Plover
Great Bustards are easy to see at this time of year and during the day we counted at least 90 of them. In contrast, Little Bustards proved elusive and we managed to find only one small flock numbering 11 birds. 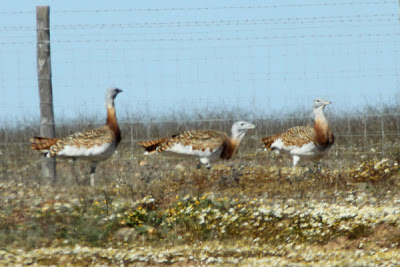 Great Bustards - as so often, with an unattractive wire fence behind them... 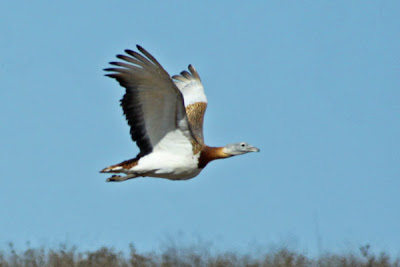 ...and then unfortunately spooked by a passing truck just as they were coming within range!
It was a reasonably good day for raptors. Red Kites, another winter bird here, seemed to be everywhere and Common Buzzards and Common Kestrels were also numerous. Other species seen were Black-winged Kite, Hen Harrier, Marsh Harrier, Peregrine Falcon and Spanish Imperial Eagle. 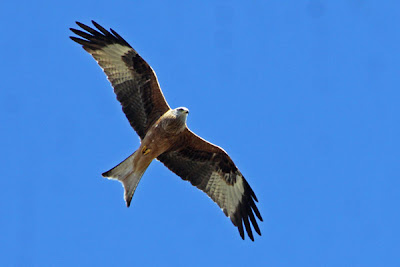 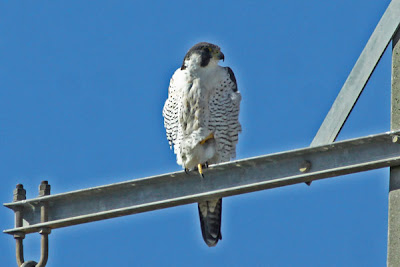 Peregrine Falcon
Iberian Grey Shrikes (as some would have us calling them now) were also numerous. They're hard to miss as they perch on roadside power poles and cables but elsewhere it's often their far-carrying song that draws them to our attention. 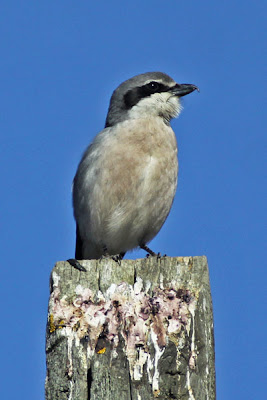 Southern (Iberian) Grey Shrike
Black-bellied Sandgrouse are also birds that are very often heard before they are seen. We saw about two dozen of them during the day but all of them were flying and we didn't find any on the ground.

White Storks have been back on their nests for some time now. One day we must count the number of nests in this area! 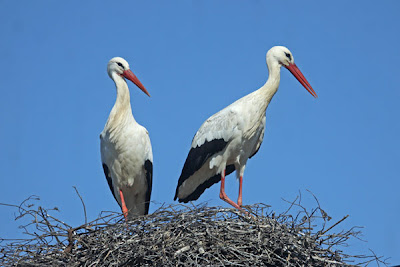 A happy couple!
With so many waders on our doorstep here on the coast, we don't normally go out of our way to look for them in the Alentejo but still we recorded seven species, a list that included Ruff and Wood Sandpiper, two that we might not have predicted. 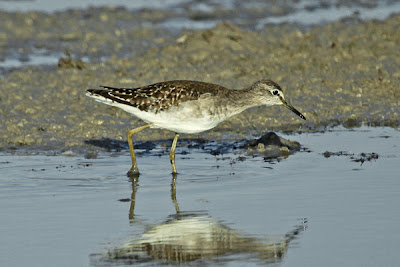 Wood Sandpiper
All in all, it was decent day's birding!
Posted by Peter and June at 18:00 No comments:

A Mixed Bag of Birding

It continues to be dry and sunny here with temperatures rising as high as 18º C most days. It’s a little over two weeks since we returned to the Algarve after our tours in Ethiopia and the USA and during that time we have seen mainly clear blue skies. That kind of weather makes it hard to resist going out birding and there have been only a couple of days when we have even thought about resisting! There's been guiding, survey work and lots more...

Yesterday we spent the whole day working on our Atlas square, carrying out timed counts of the birds in six different tetrads. That’s the Atlas Aves Invernantes e Migradoras or Atlas of Wintering and Migratory Birds, a project co-ordinated by SPEA which started last August and will continue until February 2013.

Our survey area is a 10km square in the rolling hills north of Tavira. It’s not far away and there are parts of it that we have regularly driven through, but we haven’t really done much birding there until now. Visiting and birding in new areas are the bonuses that come from atlas survey work. 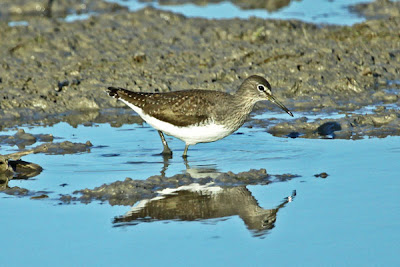 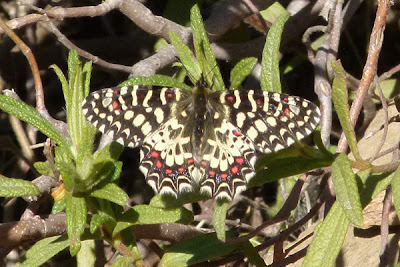 Spanish Festoon – just one of several butterfly species seen yesterday
Earlier in the week there was a cross border trip to the Doñana area, the highlight of which was finding a really wet and muddy ricefield that was just teeming with birds. There were thousands of waders of at least ten species plus Glossy Ibises, Yellow and White Wagtails, Little Egrets, Purple Swamp-hens, Meadow Pipits and probably more. Nearby, La Cañada de Rianzuela was also full of birds but otherwise much of Doñana was very dry and rather birdless. It’s a bit ironic that the birdiest area should be outside the National Park! 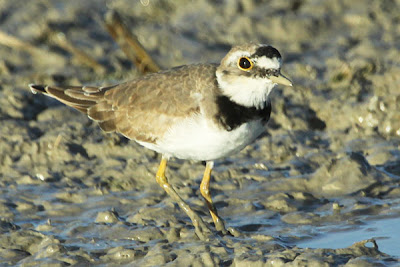 Little Ringed Plover – many were seen in the flooded ricefield and there was one in our Atlas square
We spent one morning last week near Castro Marim helping to make artificial flamingo nests. They have been sited in a protected area where there is no public access and the idea, which has been successful elsewhere, is that such nests might stimulate some of the Greater Flamingos that occur there to stay and breed. There was an unsuccessful nesting attempt at Lagoa dos Salgados in 2010 that was widely reported as being the first in the Algarve but there is actually a record of successful breeding at Castro Marim in 1987. Maybe they will try again... 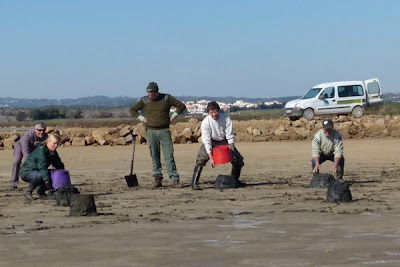 Making mud pies to encourage Flamingos to nest!
Otherwise we’ve been birding at the regular sites along the Algarve coast. We were pleased to find that the two long-staying Snow Buntings were still in more or less the same spot along the beach at Vila Real de Santo António where they were first seen before Christmas. Debate continues concerning their subspecific identity! 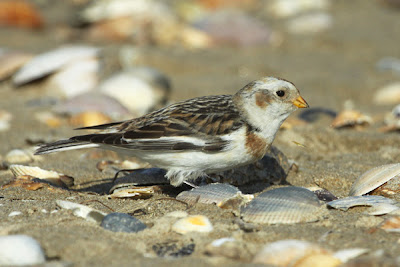 Nivalis or insulae? You decide!
At Vilamoura we were able to find only four Ferruginous Ducks but there have been reports recently of as many as 17 of them there. 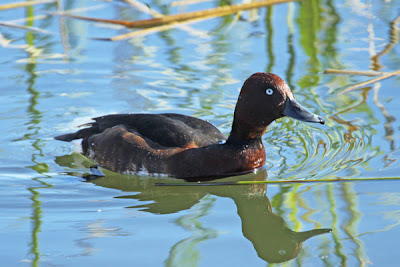 Short-eared Owls continue at the Tavira saltpans but it has been a while since we saw more than two of them.

Short-eared Owl
Mediterranean Gulls have been a feature of the saltpans at Olhão. More than 200 of them were counted this week including several with colour-rings, birds originating from France and Belgium it seems. There are also two pairs of Common Shelducks displaying there, a species that appears to be increasing in number in the Algarve. 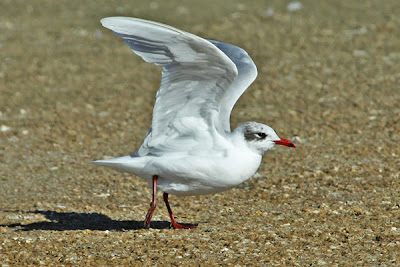 Mediterranean Gull
In the last few days we’ve also seen a Dutch-ringed Black-tailed Godwit, both French- and Spanish-ringed Greater Flamingos and a ‘rescued’ Yellow-legged Gull that acquired its colour-ring here in the Algarve at the Centro de Recuperacao e Investigacao de Animais Selvagens where it was presumably treated successfully. 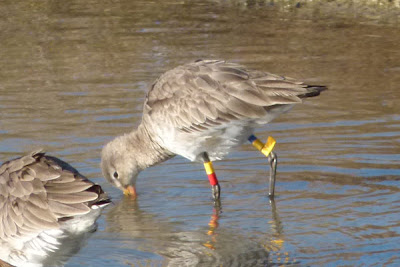 Dutch Black-tailed Godwit
Posted by Peter and June at 16:08 No comments: