Some days guiding can be really hard work!  Take Sunday, for instance.  We had a 12-hour day and managed to find just 41 species.  We were in the Castro Verde area where finding birds at this time of year can be really tough.

There are times of the year in that area when you can expect to see Great Bustards round every corner; this is not one of those times.  We saw only five all day!  Little Bustards are no better; in spring they are everywhere, displaying and drawing attention to themselves; in winter, they are in flocks, now they are more or less invisible.  We saw just three of them.

The day’s bird list also included Black-bellied Sandgrouse, Spanish Imperial Eagle, Griffon Vulture (70 of them, on the ground), Short-toed Eagle, Bonelli’s Eagle, Lesser Kestrel and Blue Rock Thrush so it wasn’t a disaster but it’s not good for the nerves when you have the responsibility for finding these birds.  People say it must be nice to have a job that you enjoy and without any pressure – they just don’t know the half of it! 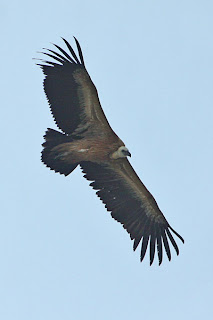 Yesterday was entirely different.  We had just a morning’s birding around Tavira, probably no more than three hours during which we saw 50 species, 18 of which were shorebirds.  We say shorebirds rather than waders because, as on Sunday, we were accompanied by visitors from the USA.  In the USA, waders are long-legged birds like herons, egrets and storks. 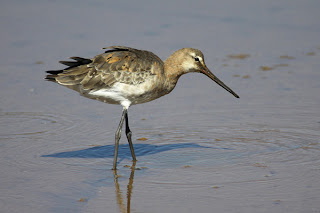 Anyway, they were two contrasting days but both enjoyable in their own way – good birding, pleasant company and super fine weather, too!