Back to Castro Marim

Yesterday was a photography day as a result of which we have added new images of Azure-winged Magpie, Black Redstart, Chiffchaff, Linnet and Dartford warbler to the slideshow on our website. Of the fifteen species that came within camera range the most remarkable, however, was a Pied Flycatcher, the first we have seen since 15th October. Although it was able to fly, it did seem to have sustained some damage to its left wing so perhaps had decided against going for the trans-Saharan crossing hoping instead to survive the winter here. We’ll keep an eye open for it. 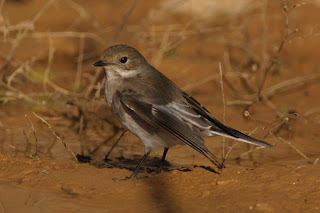 Pied Flycatcher
Today we were at Castro Marim (again) and as usual recorded more than 80 species. On a warm sunny morning it was difficult to be surprised by Yellow Wagtail and Barn Swallow and really there was nothing unexpected. Almost the first birds we saw were three Little Bustards, a species that we have seen on six out of our eight visits since the beginning of October but in four different, widely separated areas of the reserve so that they are never guaranteed. Other highlights were a single Slender-billed Gull (a species that we are hoping SPEA will soon accept is not a rarity!), Lesser Short-toed Lark, 12 Little Terns, 2 Caspian Terns, Peregrine Falcon, 110 Black-necked Grebes, about 40 Shelducks and at least 25 Stone Curlews.
We ate our lunch by the Guadiana River and couldn’t resist trying yet again for flight pictures of Sandwich Terns. However, none were an improvement on the earlier, more easily obtained images of birds on the saltpans. 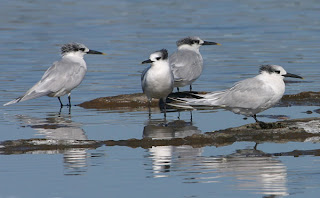 As usual, we stopped at Altura on the way home but nothing much there had changed since our last visit. Counting the birds on and around the tank is never easy but there looked to be about 100 Mallard, 50 Common Pochard, four Northern Shoveler, about 20 Little Grebes and ten Eurasian Coots.