After the Dusky Warbler last week came news of a Little Bunting trapped and ringed near Portimao, but both were eclipsed by yesterday's news of a Wallcreeper on the Algarve. It was seen only briefly and hasn't yet been re-located but we live in hope!

Today, an afternoon walk locally produced the usual selection of waders, (including several Little Stints and Greenshanks), Greater Flamingos, a Spoonbill or two, Mediterranean Gulls, a single Slender-billed Gull and several Kingfishers. Around the edges of the saltpans, Chiffchaffs and Sardinian Warblers were the common birds and there were a couple of sightings of Bluethroats.

Along the track that leads down to the saltpans we had good views of Common Waxbills, a single Dartford Warbler and several Zitting Cisticolas. In the distance we could see Northern Gannets passing just offshore. 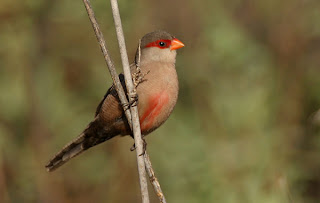 Probably the ’best’ bird of the afternoon was a Black-shouldered Kite, seen at some distance but always a bird we enjoy. There was speculation as to whether it was the same bird we saw in the nearby Vale Formoso on 4th November. Anyway, we shall hope to see it again.
Posted by Peter and June at 18:22