Cheered greatly by the overnight news from the USA, we set off this morning to do one of our regular walks. It was bright and sunny and warm enough to be wearing shorts, although by lunchtime there was a build-up of cloud.
Starting in Tavira the walk takes us over the extensive area of saltpans that lie between the town and neighbouring Santa Luzia. It is a great place to see waders and today we found 20 species, including four Golden Plovers that are unusual in this habitat. 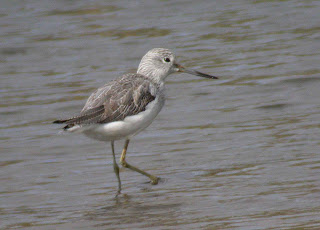 The last time we were here (25th October) we counted about 700 Greater Flamingos but we could find only about 150 this morning. Other highlights were a Bluethroat, lots of Spoonbills, six species of gulls (including Slender-billed and Audouin’s), a Peregrine Falcon and our old friend the ’Grey Egret’, seen in its usual spot.

Later in the afternoon a call from Simon Wates brought news of a Dusky Warbler reported from Quinta do Lago. It was too late for us to go and tomorrow we are expecting builders here to carry out long-awaited remedial work that we don’t want to postpone. So, we’ll just have to wait for further news of the bird and hope it stays around. We really don’t like big twitches but the nice thing about twitches here is that there probably won’t be more than half a dozen people there!