Yesterday, we were among a crowd of about 250 people, predominantly Portuguese, who gathered at Lagoa dos Salgados to support the continuing opposition to the planned hotel and golf course development that threatens to severely impact on and probably destroy one of the Algarve’s best birdwatching sites. 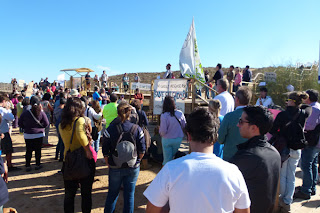 The main speaker was Domingos Leitão from Sociedade Portuguesa para o Estudo das Aves (SPEA) who described at some length the importance of the area for birds, the need for water level management and the problems that have been experienced over several years as a result of the neighbouring golf course management at Herdade de Salgados diverting water for their own use. 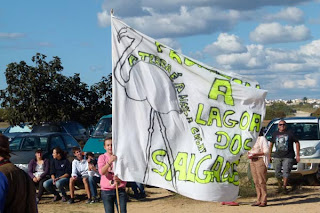 Frank McClintock, who set up the 'Save Salgados' petition on the Avaaz website (and has done much more for the campaign besides this), provided short summaries in English and explained that the petition is to be handed in to the Ministry next month.  To date it has attracted more than 17,500 signatures, many of them from outside Portugal.  Frank recognised that most if not all of those present had already signed but urged everyone to continue publicising the petition in order to maximise its effect. 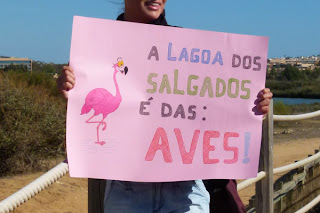 One interesting development announced in the last few days is that the Government here has suggested that it might be appropriate for an environmental impact assessment to be carried out in relation to the proposed development project.  Better late than never you might think!  Maybe this is something that has been prompted by the formal complaint against the Portuguese State that was lodged with the European Commission by SPEA, Quercus, Almargem, and the League for the Protection of Nature.  What the outcome will be, of course, remains to be seen. 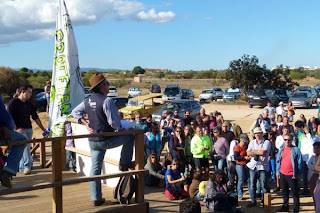 What remains unexplained is why Salgados, which is clearly an extremely important and valuable wetland for breeding, wintering and migrating birds, has no formal protection, why it isn’t a Special Protection Area under the 1979 EU Birds Directive and why it isn’t part of the Natura 2000 network set up by the 1992 EU Habitats Directive.  If it had been so recognised years ago and maybe also designated under the Ramsar Convention, then none of this would be happening.
Posted by Peter and June at 18:53

Thanks for the update. We are looking forward to our annual winter trip based aroung the Salgados and sincerely hope that work will not begin as planned.

We're all hoping for the best!