The Avian Adventures Re-union Tour took place here recently and more than kept us busy for a few days.  It brought to the Vila Galé Albacora Hotel in Tavira a group of 21 birdwatchers from the UK, 18 of whom had travelled with us on Avian tours to various parts of the world over the past 20 years.

Together with Ray Tipper (also Tavira-based and an Avian Adventures tour leader) we took the group to some of the Algarve’s best birding sites and, of course, the programme also included a day in the Castro Verde area.

A total of 126 species was recorded during the three days with a further nine species being seen by several participants who chose to stay on for a few days after the main tour.  However, this was always going to be a very relaxed tour and the number of species was never likely to be a major issue.

For most of us one of the main highlights was the sight of three Spanish Imperial Eagles together, tangling and tumbling in the air above the parched grasslands of the Alentejo.  They came into view at almost exactly the same time as a group of about ten Great Bustards, which for once and indeed for several minutes had to play second fiddle.

We were also quite pleased to see two Garganeys at Lagoa dos Salgados, a species that we have seen much less often in Portugal than Spanish Imperial Eagle!  Their presence together with so many other ducks and waders underlined the importance of Salgados and the uniqueness, in Algarve terms, of this shallow ‘fresh water’ lagoon.  Of course, we encouraged anyone who hadn’t already done so to sign the online petition to oppose the planned hotel and golf course development that promises to destroy this wonderful place. 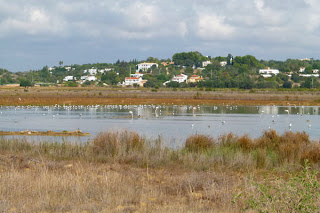 It was less of a surprise to see six Ferruginous Ducks at the Parque Ambiental de Vilamoura, a site which for some reason seems to be particularly favoured by this species.  They are far from being common birds in Portugal, however, and always nice to see. 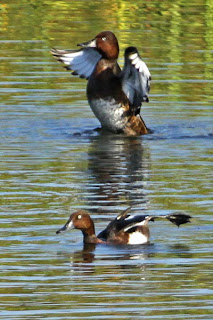 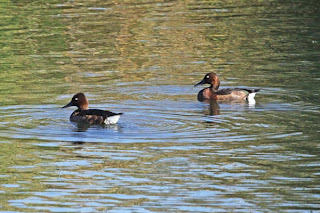 Also at Vilamoura it was good to meet up again with Colin McShane and his group from the UK who were there for their annual week of ringing at this excellent site for passerine migrants.  As it was, the only bird we actually saw handled during our short time with the ringers was a Common Kestrel but based on what we saw around the area it would seem likely that Blackcaps, Bluethroats, Reed Warblers, Willow Warblers, Whinchats and Northern Wheatears would have been featuring in their catch.

Two years ago (on 18th October 2010 to be exact), this same team of ringers trapped and ringed what is still the only North American passerine to be recorded in mainland Portugal, namely a Common Yellowthroat.  By coincidence we had a couple of days out recently with two birders from California.  They were spending a short time here before joining a ship in Lisbon for a cruise back to the USA via Madeira and The Azores.  When they arrived home they emailed to say that three Common Yellowthroats had landed on the ship about 500 miles out from the US coast which then travelled the rest of the way with them back to land.  Just imagine what might have happened if the ship had been heading in the opposite direction?
Posted by Peter and June at 18:24