After our unscheduled night in Moyobamba, we went for breakfast at Waqanki Lodge, just a 15-minute drive away to the south of the town.  We had planned a two-night stay here but now we made arrangements to extend that to three.  This would put us back in line with our original itinerary, which had been disrupted by the protesting rice growers.

Birding around the grounds of the lodge we soon found ourselves facing another set of hummingbirds to be identified.  On this occasion they were coming to flowers rather than feeders.  One of them at least was distinctive, the diminutive Rufous-crested Coquette, but also seen were Violet-headed Hummingbird, White-chinned Sapphire, Sapphire-spangled & Blue-tailed Emeralds and Amethyst Woodstar that, when all arriving together, provided more of a challenge.  Great Kiskadees were noisy as always, a Blue-headed Parrot and several Cobalt-winged Parakeets flew over, a Dull-colored Grassquit lived up to its name.  During breakfast, a Purple-throated Euphonia, a Black-bellied Tanager and a Palm Tanager came to a nearby feeder. 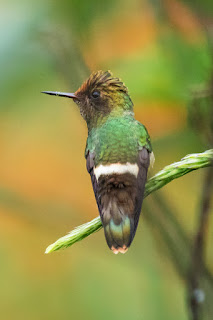 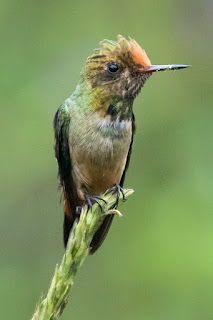 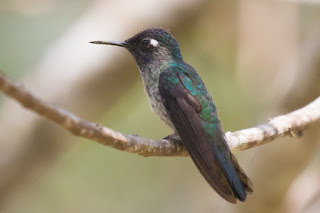 There followed a walk into the forest along a trail that was at times quite steep. We began by differentiating between Crested & Russet-backed Oropendolas, we had great close-up views of a Sooty-headed Tyrannulet and we saw what is said to be world’s smallest passerine bird species, a Short-tailed Pygmy Tyrant. The last of these measures only 6.5 cm and on average weighs only 4.2 g. 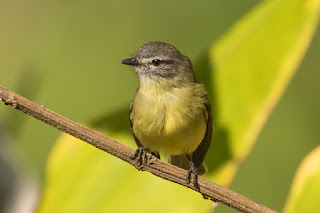 Further on there were Fiery-throated Fruiteaters, a White-flanked Antwren, Squirrel Cuckoo and Green-backed Trogon, we heard the loud song of Buff-rumped Warbler and the call of Broad-billed Motmot.  When we returned to the lodge, a Yellow-tufted Woodpecker was surprisingly approachable. 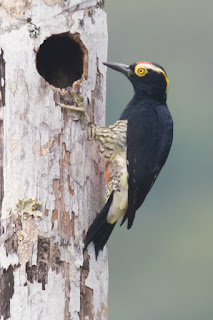 Later, we set off to enjoy one of the lodge’s main attractions, the hummingbird feeders.  This involved quite a steep climb up the hillside but resulted in even more different species.  Black-throated, Green, Reddish, Long-tailed & Rufous-breasted Hermits, Grey-breasted Sabrewing, White-necked Jacobin, Brown Violetear, Black-throated Mango, Golden-tailed Sapphire, Long-billed Starthroat and Little Woodstar brought the number of hummingbird species for the day to twenty!  It was a good job we had Carlos to help us sort them out! 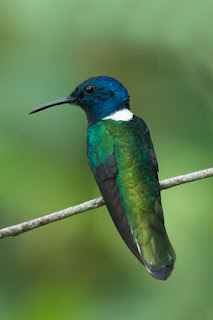 On the way back down to the lodge there were lots more birds we hadn’t seen before including Lafresnaye’s Piculet and Gilded Barbet, which appeared almost simultaneously and in the same tree.  Others were Pale-breasted Thrush, Black-faced Tanager, Little Woodpecker, Social & Short-crested Flycatchers and Russet-crowned Crake.  The last of these was teased out of the vegetation with just a little ‘playback’ and showed itself only briefly.

We went into Moyobamba for dinner but only after a short walk in the dark to look for an owl.  At this point in the tour we had probably missed as many owls as we had seen but on this occasion we were successful and a Band-bellied Owl duly appeared at Carlos’s beckoning. 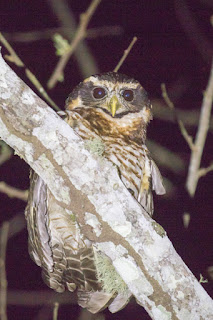 Dinner was interesting!  Chifa Central was a Chinese restaurant but, of course, the menu was in Spanish.  Chinese immigrants came to Peru in the late 19th and early 20th centuries and Chifa is a culinary tradition based on Cantonese elements fused with traditional Peruvian ingredients.
On the way back to the lodge, we looked for a Stygian Owl around the backstreets of Moyobamba but didn’t find one.

Next morning we once again headed along (and up) the forest trail we had been on yesterday.
One of the first birds we caught a glimpse of was a Ferruginous Pygmy Owl as it flew away from us and disappeared into the trees.  We continued to hear it for some time.  Inevitably, we saw quite a number of species we had seen yesterday but an Ochre-bellied Flycatcher and a Mouse-colored Tyrannulet were further additions to our list before we came upon what would have one of the star birds of the whole tour, a Golden-collared Toucanet, if only we could have had a closer view.  Further notable species included Wing-barred Piprites, Mishana Tyrannulet, Tschudi’s Woodcreeper, Peruvian Warbling Antbird, Plain-winged Antshrike, Olivaceous Flatbill, Black-and-white Tody-Flycatcher, Olivaceous Woodcreeper, Thick-billed Euphonia and Slaty-capped Flycatcher.  This forest gave the impression that there would always be the chance to see something new no matter how many times we walked the same trail.

Back at the lodge we realised that the strange structure we had seen yesterday hanging from inside the roof of the substantially-built gazebo in the garden was the nest of a Lesser Swallow-tailed Swift.  We realised this because a Lesser Swallow-tailed Swift made several visits to the nest while we were standing underneath!  The nest, made from plant material, seed heads and the like, was barely recognisable as such and it was hard to imagine how the contents stayed in it, defying gravity. 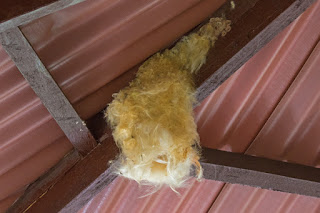 After lunch we were given a short tour of the Waqanki Orchid Centre, an attraction that apparently brings in quite a number of visitors who pay 10 soles to look round the 150 or so species of orchids that grow here.  Carlos knew the orchids like he knew the birds.

After seeing Chestnut-bellied Seed Finch and Blue-winged Parrotlet in the garden, we boarded the minibus and went off to a site where the main target, Point-tailed Palmcreeper, could hardly have been easier to find.  Even before we were off the bus one was showing in a roadside tree and was well seen.  A short walk here also produced Chestnut-eared Araçari, Common Tody-Flycatcher, Sulphury Flycatcher and another Mouse-colored Tyrannulet, a bird that didn’t seem any more or less mouse-coloured than several other small flycatchers that we had seen. 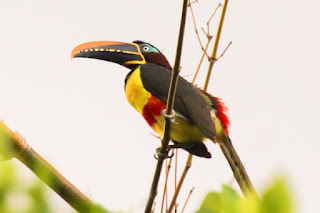 Next we drove to a pond where Carlos seemed confident we would see Masked Ducks.  We did see them but would not have done without the aid of a telescope and even then they were hard to make out as they slept among the waterside rushes.  Common & Purple Gallinules were also present and a Black-capped Donacobius made a brief appearance.  We walked along the road and found two more new species, Rusty-backed Antwren and Cinereous-breasted Spinetail, before heading back to the lodge.

For dinner we went to the Hospedaje Ecologico Rumipata where the food was Japanese-style and the tilapia in particular was very tasty.  It rained while we were there.  A few detours on the way back around Moyobamba looking for a Stygian Owl, or indeed any other sort of owl, brought the same result as last night.

By changing our schedule we had missed a planned visit to Reserva Arena Blanca.  This morning we put that right by making an early start and driving for more than an hour in order to get there by 6:30 am to see the main attractions at the feeders.  In fact, there are a number of species that come early in the day to take advantage of the seed put out for them.  We had really good views from the hide of two Little Tinamous, a female and a juvenile, and a Cinereous Tinamou but didn’t see the Grey-cowled Wood-Rail, Ruddy Quail-Dove, Orange-billed Sparrow or Rufous-breasted Wood-Quail which are also visitors here on some mornings.  However, there was no sense of disappointment; tinamous are notoriously shy and secretive birds and it was an unusual experience to watch these three birds for several minutes at a range that allowed us to take photographs. 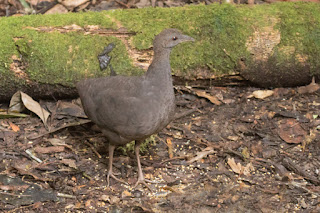 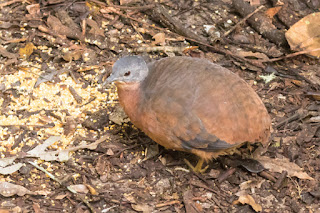 Outside the hide there was a brief view of an Andean Cock-of-the-rock and a Pale-eyed Thrush before we moved on to breakfast by the hummingbird feeders.  The star turn here was Wire-crested Thorntail but the supporting cast of Many-spotted Hummingbird, Golden-tailed Sapphire, Blue-fronted Lancebill, Brown Violetear, Grey-chinned Hermit and Violet-fronted Brilliant kept everyone on their toes.  It is reported that 28 species of hummingbirds have been recorded here. 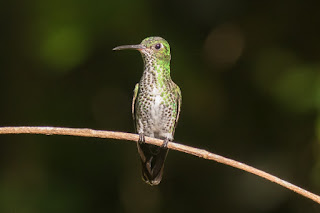 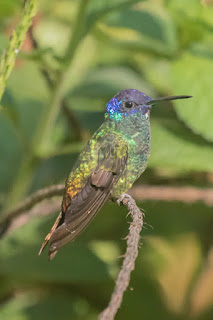 Later in the day we visited some ricefields where, resisting the temptation to debate with the farmers the rights and wrongs of Brazilian imports, we concentrated on the wealth of bird life.  It had been a week since we had seen a wader of any sort so Wattled Jacana, Spotted & Solitary Sandpipers, Black-necked Stilts and Lesser Yellowlegs were welcome sights.  Little Blue Heron, Black-crowned Night Heron, Great & Snowy Egrets had also been absent from our list since we left the coast.  This was the only occasion during the tour that we saw Limpkins and it was no surprise a few minutes later to see a Snail Kite.  Both species feed particularly on apple snails (Ampullariidae).  It was very noticeable how much darker in colour the Limpkins were compared to those which most of us had seen previously in the USA and Central America.  Limpkin was in fact split into two species for many years but has been treated as one since 1934.

We spent our last morning at Waqanki Lodge walking the same steep trail we had been on twice before but it came as no surprise to find several bird species that we hadn’t previously seen.  Most prominent were the noisy Speckled Chachalacas and yet we failed to see them.  They were close and called loudly but still remained out of view.  Those species that we did manage to see included Yellow-browed Sparrow, Forest Elaenia, Yellow-crowned & White-lored Tyrannulets, Foothill Antwren, Bluish-fronted Jacamar (‘a hummingbird on steroids’), Stripe-chested Antwren (looking very much like a Black-and-white Warbler), Chestnut-throated Spinetail, Coraya Wren, Fiery-capped Manakin, Guira Tanager, Lemon-chested Greenlet, Slaty-capped Flycatcher and, somewhat unexpectedly, Cerulean Warbler.

After an early lunch we left Waqanki Lodge at about 1:00 pm. Just as we were about to leave Carlos’s mother appeared with an enormous yellow caterpillar. This we learned was a flannel moth caterpillar and she was keeping it well away from her skin as its long hairs are extremely venomous and can cause a painful sting. It seems it belongs in the genus Megalopyge and is known in the USA as a “Trumpapillar” because of its resemblance to the President’s hair! 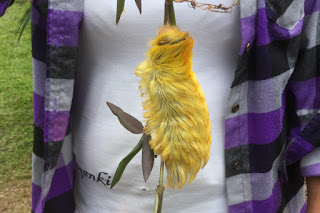 It was a long drive to Tarapoto.  On the way we stopped for some birding and although it was a relief to break the hot, uncomfortable journey, we now spent an hour feeding the mosquitoes along a narrow trail.  However, it was worth any discomfort as we were rewarded with a succession of birds we hadn’t seen before including White-browed Antbird, White-lined Tanager, White-bellied Pygmy Tyrant, Stripe-chested Antwren, Black-fronted Nunbird, Plain-crowned Spinetail and Northern Slaty Antshrike.

Finally, we drove for another hour to the Hotel Cumbaza in Tarapoto where we had had lunch almost a week ago.  Now we had dinner and a bed for the night.

Next morning we left the hotel at 6:00 am taking the winding mountain road north from the city.  It was another bright, sunny morning and soon we were birding along the roadside.  During the first hour or so we found Cliff, Social & Streaked Flycatchers, Slaty-capped Shrike-Vireo, three or four Andean Cock-of-the rocks, Buff-throated Foliage-gleaner, Bay-headed, Masked & Swallow Tanager, Rufous-bellied Euphonia and low-flying Turkey Vultures.  One or two Swallow-tailed Kites also past over but mostly remained higher.

The main purpose of our excursion to this area was to visit the ACONABICKH Reserve, a well-known site where the endemic Koepcke’s Hermit is just one of several interesting hummingbirds seen regularly at the feeders.  It took some time at the feeders before we all had a satisfactory look at Koepcke’s Hermit but in the meantime we were entertained by several other species, notably Gould’s Jewelfront, Grey-breasted Sabrewing and White-necked Jacobin.  Koepcke’s Hermit is fairly new to science, first discovered as recently as 1977.  Unusually for a hermit, it has an almost straight rather than down-curved bill. 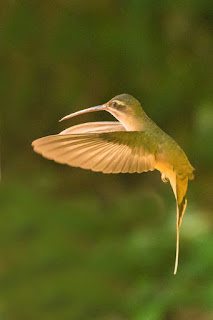 After lunch back in Tarapoto we headed to the airport for a LATAM flight to Lima.  All went smoothly and the evening saw us back at the familiar Hotel San Agustin Exclusive, Miraflores.