After a second night in Lima we were up early next morning so as to take a LATAM flight to Tarapoto. The flight was a routine affair arriving in Tarapoto at around 11:00 am. Half an hour later, we were with new guide, Carlos Altamirano and heading for lunch at the nearby Hotel Cumbaza.

Tarapoto is in the north of Peru, the largest city in the San Martin region. From here we spent the rest of the day making our way along the main road (the 5N) to Owlet Lodge where we planned to spend three nights. On the way there we made a number of stops, the first at Cañón Quiscarrumi where from the roadside we looked down into a dark cave where there was a colony of Oilbirds. Carlos told us that there were as many as 300 of them but it was hard to estimate how many we actually saw, perhaps 25 at one time, some flying others resting on the rocky ledges. These birds are nocturnal and nightjar-like in appearance but unlike nightjars they are said to be fruit eaters. The common name "oilbird" derives from the fact that in the past chicks were captured and boiled down in order to make oil!

At about 3:00 pm we stopped to refuel in Moyobamba, the regional capital.  After that it was another long drive before we paused again to look for birds.  This time we were on a bridge high above a river.  A flock of Band-tailed Pigeons flew over as Carlos began playing the call of Ferruginous Pygmy Owl.  This had the desired effect and in just a short time the call had attracted a selection of birds, mostly tanagers, to come looking for the owl.  Species seen were Bay-headed, Golden, Paradise, Green-and-gold, Yellow-bellied, Yellow-crested and Blue-necked Tanagers, Orange-bellied Euphonia, Purple Honeycreeper and Fork-tailed Woodnymph.  Quite a collection!

At last, at around 7:00 pm we reached Owlet Lodge. By this time is was dark and climbing from the parking area to the lodge was a bit of a challenge but we soon settled into our rooms. Dinner quickly followed and it wasn't long before we were in bed anticipating another early start tomorrow. 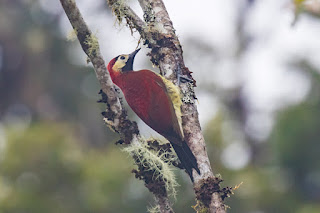 Part of our first full day at Owlet Lodge was spent quite close to the lodge itself.  Just outside the main building, we found Golden-olive Woodpecker, Variable Antshrike and Yellow-breasted Brushfinch, Rufous-browed Peppershrike, Bluish Flowerpecker and Spectacled Whitestart.  When we explored nearby forest trails Peruvian Tyrannulet, Sierra Elaenia and Glossy-black Thrush were among the first to show but were soon eclipsed by the more colourful Crimson-mantled Woodpecker, Grass-green, Flame-faced, Yellow-scarfed and Blue-and-black Tanagers and Lacrimose Mountain Tanager.

We also spent quite a while by the hummingbird feeders that are one of the main attractions here. On Thursday we had struggled to identify the three hummingbird species seen at Lomas de Asia, now we had eight species appearing almost simultaneously and before the end of the day we would see thirteen! It took a while to get to grips with them. Most numerous at this first session were the Chestnut-breasted Coronets; cutest were the White-bellied Woodstars, the latter hovering at the feeders without ever landing. 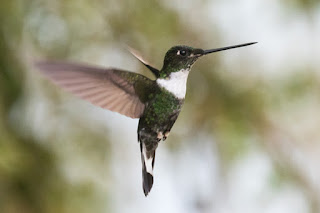 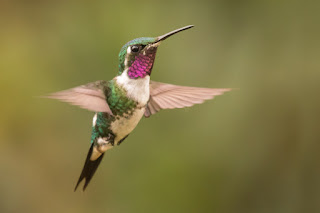 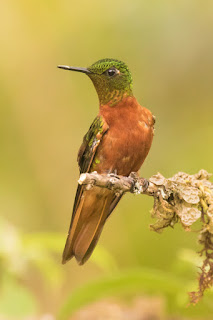 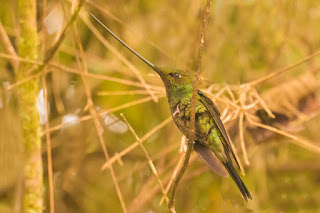 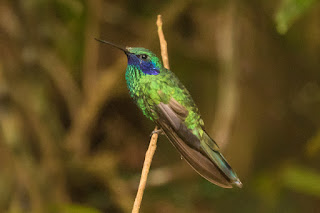 Also on our agenda was to go and watch the feeding of the antpittas, another of the attractions at Owlet Lodge. Feeding individuals of this hard to see family of birds so that they are more easily seen seems to have started in Ecuador but now happens at quite a number of sites in South America. Here the species involved were Rusty-tinged & Chestnut Antpittas, both of them endemic to Peru. Despite the fear of some that worm-feeder tourism may have a negative impact on many species of threatened antpittas, it has also been suggested that it is not far from being natural behaviour. Commensal foraging relationships involving birds as “follower” species are common and wide-spread geographically and taxonomically (e.g. Cattle Egret and Yellow Wagtail) and perhaps surprisingly there are well documented cases of antpittas actually following humans through the rainforest in order to feed on prey items that are disturbed. 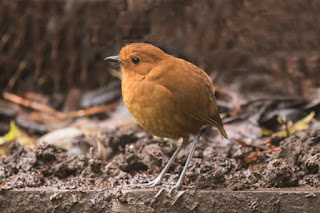 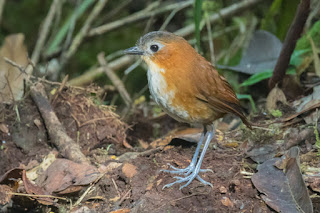 Our re-start after lunch was delayed by rain but by 3:00 pm it had stopped and we boarded the minibus to travel just a short distance and then do some birding along the main road. Notable here were Barred Becard, Rufous-capped Antshrike, Green-and-black Fruiteater, Common Chlorospingus and Oleaginous Hemispingus (notable at least for its name if not for its appearance). On the way back to the lodge we saw two White-capped Dippers, a Hooded Mountain Tanager and, fittingly, close to the highway, a Roadside Hawk.

The whole day had been cloudy and dull with light rain (heavier around lunchtime) and most of us had had enough when we got back to the lodge at about 5:00 pm.  The weather conditions were such that the scheduled long trek to try and see the Long-whiskered Owlet (after which the lodge was named) was out of the question.

Breakfast next morning was at 6:00 am. There was a cloudy start to the day but at least there was only very light drizzle as we set off to walk a trail that would take us eventually down to and along the main road. We were out for about an hour and a half during which time the highlights were Azara’s & Rufous Spinetails, Johnson’s Tody-Flycatcher, about half a dozen Sharpe’s Wrens, Russet-crowned Warbler, Inca Flycatcher, Geoffroy’s Wedgetail and a very brief glimpse of the sun.

Having failed to find any worthwhile flocks of tanagers or other birds close to the lodge, we set off in the bus to try our luck along the main road.  It took a while but eventually we found ourselves with a nice mixed flock, so many birds in fact that it was hard to see all of them. They included Ashy-browed Spinetail, Equatorial Greytail, Ecuadorian Tyrannulet, Grey-mantled Wren, Yellow-throated Chlorospingus and Green-backed Becard. They were quickly followed by White-winged Tanager, Olive-backed Woodcreeper, Ornate Flycatcher, Orange-bellied & Bronze-green Euphonias and more. This was more like it!

A five-minute drive further along the road and again we found ourselves trying to cope with a bird flock. This time it was mostly tanagers: Golden, Golden-eared, Green-and-gold, Paradise, Blue-grey and Palm were quickly followed by Magpie Tanagers. Not far away an Andean Cock-of-the-rock could be heard but, unfortunately, remained unseen.

It was now a 45-minute drive back to Owlet Lodge; at last the sun was shining and most importantly, we had seen a good variety of birds; things were looking up! However, lunchtime brought news that would mean we had to change our plans for the next couple of days (and nights) and difficult decisions would have to be made.

Carlos had been warned that there was going to be a protest made by local rice growers about cheap imports of rice from neighbouring Brazil. These protests were going to involve blocking the main road between Owlet Lodge and Moyobamba, the road on which we were due to travel on in two days’ time, a road to which there was no real alternative. Road blocks would be in place from midnight, we were told. The rice farmers really were having a paddy! But it was no joking matter. Previous similar protests had seen roads blocked for days on end and we were threatened with the possibility of having to stay longer at Owlet Lodge and, in the worst case scenario, there could be the chance we might miss our flight back to Lima at the end of the week. There seemed to be three possibilities: we could take that chance and stick with our planned itinerary, we could take to the road but in the opposite direction, go to Chiclayo and fly to Lima from there or we could pack our bags now, cut short our stay at Owlet Lodge and make sure we reached Moyobamba tonight while the road was still open.

It didn’t take long to decide on the third option, but that meant having to sacrifice not only a night at Owlet Lodge but also our one planned night at Hotel Puerto Pumas. The main purpose of going to Puerto Pumas was to try and see the Marvelous Spatuletail, a hummingbird that has an extraordinarily long tail and is unique among birds in having just four feathers in its tail. It was little more than an hour away. We decided to go now! 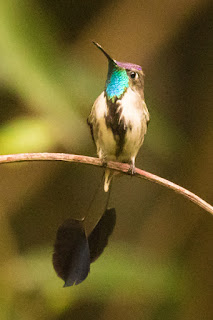 The feeders at Puerto Pumas did not disappoint! Not only did we see a Marvelous Spatuletail but also Andean Emerald, Violet-fronted Brilliant and White-bellied Hummingbird that we hadn’t seen before. As we sat watching the hummingbirds, three Andean Guans were also seen coming to another feeder about 100 metres away. 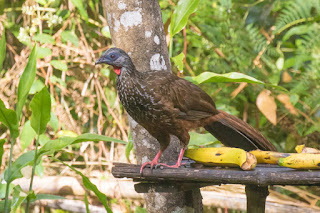 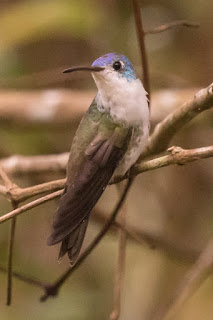 The Marvelous Spatuletail came to the feeders just twice while we were there. On the first occasion it fed and then perched very conveniently for photographs. The second visit was much shorter and coincided with a lot of activity at the feeders – maybe it was intimidated by the many larger birds and not willing to compete. It was an individual with a fairly long tail but a tail that was still not fully grown. As soon as it was gone the second time, we also left.

We were back at Owlet Lodge for 6:00 pm, had dinner at 6:30 pm and left again at 7:00 pm. We were off to Moyobamba for the night where a stopgap booking had been made at the Gran Hotel Dorado. Our sole aim was to avoid the road blocks.  It was definitely the right decision to leave but, unfortunately, it did put an end to any chance we might have had of seeing the mysterious Long-whiskered Owlet.