New Ramsar site in the Algarve

We were pleased to see recently the report that two new Ramsar sites have been designated in Portugal, bringing the total in the country to 30.

Ramsar sites are wetlands of international importance.  Ramsar is the city in Iran where a meeting was held in February 1971 that resulted in The Convention on Wetlands of International Importance, now generally known as the Ramsar Convention.

The Convention is an intergovernmental treaty that embodies the commitments of its member countries to maintain the ecological character of their Wetlands of International Importance and to plan for the "wise use", or sustainable use, of all of the wetlands in their territories.

The Convention eventually came into force in December 1975 by which time seven nations had signed up to it.  It was several years before Portugal joined, its first two Ramsar sites being designated in 1980.

The two new sites are Pateira de Fermentelos Lake and Águeda and Cértima Valleys in the Região do Centro and the Ribeira do Vascão in the Algarve (in part, forming the border between Algarve and Alentejo). 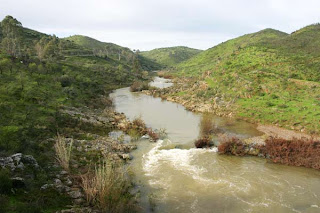 The Ribeira do Vascão is the biggest river in Portugal without any artificial interruptions such as dams or reservoirs.  It is said to support high concentrations of threatened species of freshwater fishes such as Jarabugo (Anaecypris hispanica), European Eel (Anguilla anguilla) and Sea Lamprey (Petromyzon marinus).

We know it as an attractive landscape feature and stretches of it as good bird habitat and birdwatching sites.  One of the squares that we are covering this year for the Atlas of Wintering and Migratory Birds is bisected by the river. 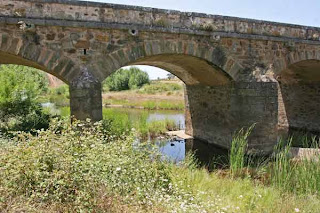 The Ribeira do Vascão is the fourth Ramsar site to be designated in the Algarve after Ria Formosa (1980) and Sapais de Castro Marim and Ria Alvor (both 1996).  Clearly designation brings no absolute guarantee of protection or that strict planning controls will be enforced but it does ensure international recognition of a site's importance.

Email ThisBlogThis!Share to TwitterShare to FacebookShare to Pinterest
Labels: Ramsar, Ribeira do Vascão