We know that even in December there can be rarities here in the Algarve.  We think particularly of Portugal’s only Moussier’s Redstart that was present throughout December 2006 near Sagres and we recall finding a Long-tailed Duck at Castro Marim in December 2007 that was only the fourth for the Algarve.  It’s not really a month, though, when we expect to record species that we have never before seen in Portugal, so it’s been a surprise for us to have enjoyed two such birds within the space of a week and to have missed seeing a third!

Last week we had a very pleasant and relaxed day birding around the Ludo and Quinta do Lago areas.  We managed to find 84 species during the day, a total that included an Osprey, eight Booted Eagles, two Black-winged Kites, a Marsh Harrier, a Glossy Ibis, four Little Bitterns and a Wryneck.  However, the day’s rarity came when we went for a morning coffee break to Praia de Faro.  There, from the car park, we looked out to sea and saw just one bird – a Great Northern Diver!  It was too far away to photograph but through the Swarovski easily recognisable and we assume that it was the same bird that had been reported a few days earlier from the nearby Ilha do Farol.  Although Great Northern Divers are annual visitors off Portugal’s west coast, there are only three previous records for the Algarve.  So that was our first ‘new’ bird.

Our second ‘new’ bird was also a diver, this time a Red-throated Diver and even more of a rarity.  It was found by Thijs Valkenburg and João Tiago Tavares in the mouth of the Guadiana River that separates Spain and Portugal.  By the time we got there the bird had moved up river and we were actually in Vila Real de Santo António when we watched it slowly drift further away until it was definitely on the Spanish side of the river.  This was only the second record for the Algarve, the previous one, coincidentally being off Praia de Faro in 2006. 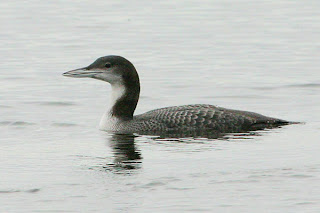 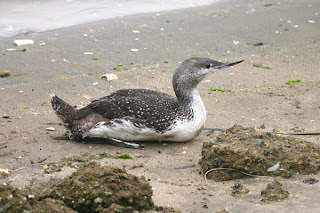 No photographs from the Algarve but two from elsewhere to illustrate the differences between the two species, particularly the size and shape of the bill.

The third rarity, the one that we haven’t seen, was also in the mouth of the Guadiana River; it was a Brent Goose, a species for which there are only a handful of records here.  Maybe it will stay around.

Looking forward to them remaining there for a while.We're due in the Algarve tomorrow.