Projecto Arenaria (the ‘Turnstone Project’) is a survey of non-estuarine coastal birds here in Portugal that is similar to the Winter Shorebird Count carried out in the UK in 1984/85 by the British Trust for Ornithology. Living at the time in Staffordshire, about as far from the coast as you can be in the UK, Peter was an unlikely volunteer to participate in that survey but that’s what happened with round trips of 300 miles being made to count shorebirds along the coast of North Wales. Madness!

Arenaria began in 2009/10 so this is its third year. Counts have to be made between 1st December and 31st January, a period for most of which we were away in Ethiopia, the UK and the USA, so we weren’t expecting to take part this time. However, we returned last Tuesday to find that there was a stretch of coast not too far away that still hadn’t been surveyed. 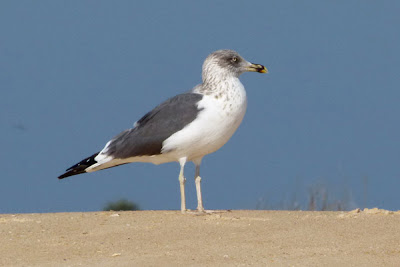 Lesser Black-backed Gull
So this morning we walked along the beach from Praia Verde to Cacela Velha and back. It was another beautiful morning with a clear blue sky and temperatures that at times exceeded the forecast 16°C. A three-hour walk in the sun was exactly what we needed! As part of the survey, we counted not just the birds but also the people and any dogs that weren’t on a leash and as it was Saturday there were plenty of both.

By far and away the most numerous bird species was Lesser Black-backed Gull totalling just over 500. There were only a handful of Yellow-legged Gulls and a single Slender-billed. A few Sandwich Terns flew by, Northern Gannets were diving off-shore and just off the beach there was a single Razorbill. Waders were represented only by Kentish Plovers and Sanderlings and there were few of either. 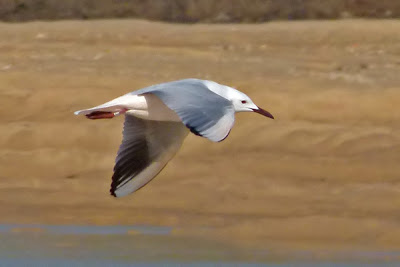 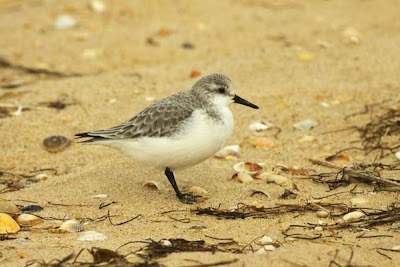 Sanderling
Single Spoonbill and Cormorant flew over but probably the only real surprise was when a flock of 22 Common Pochards passed over, heading east to and from who knows where.

Will our data be of any use to anyone? Well, of course we hope so but more importantly we enjoyed collecting it and what’s more we didn’t have to drive 300 miles to do it!
Posted by Peter and June at 21:41