With temperatures continuing around 25°C along the coast and 5 degrees warmer than that in the Baixo Alentejo, it’s been a another warm week for us as well as a fairly hectic one.

We’ve enjoyed two reasonably successful trips to the plains around Castro Verde looking for the special birds of that area. Even if we didn’t find Little Bustards, any day that produces four species of eagles has to be considered a good day!

On the other hand, our trip to Sagres and Cabo de São Vicente at the far western end of the coast was something of a disappointment - we simply picked the wrong day. Of course we were hoping to see some raptors migrating but few were in evidence – just a few Egyptian Vultures, a couple of Booted Eagles and one or two Hen Harriers. Not only that but we missed seeing the Rose-coloured Starling that was reported in the area. Lots of Northern Gannets and Cory’s Shearwaters were passing offshore and there might well have been more but we came away and spent the afternoon at Lagoa dos Salgados. 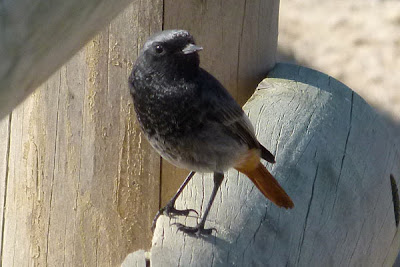 Black Redstart at Cabo de São Vicente
Salgados had an excellent assortment of birds in spite of the water level being rather higher than ideal. Purple Swamp-hens and Glossy Ibises were amongst the species seen. On the way back, we called at a site that regularly provides Black-crowned Night Herons and Little Bitterns with hardly the need to get out of the car. On this occasion it also provided a bonus in the form of a Wryneck.

Of course, Wednesday’s Pectoral Sandpiper was the week’s main highlight but, in terms of birds that we don’t often see here, a group of five Sacred Ibises is worthy of mention. Maybe while there are still only five of them we should be considering whether these are birds we really want here – perhaps a topic for another day. 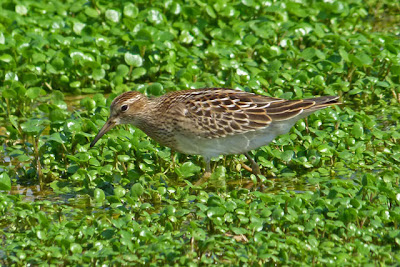 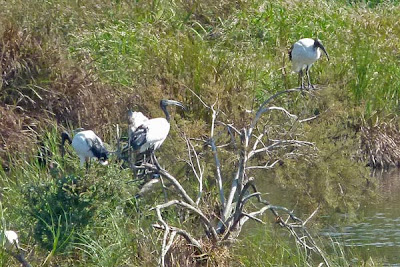 Sacred Ibises
A morning spent in the Ria Formosa began well with five Booted Eagles, two Black-winged Kites and two Common Buzzards in the first half hour. In fact it’s been a good week for Black-winged Kites, a species which definitely seems to be increasing in numbers here. Twice recently, early starts have resulted in Red-necked Nightjars being the first birds of the day.

As usual, the Tavira/Santa Luzia saltpans have had a fair amount of our attention. This week the number of Mediterranean Gulls has increased and it’s now sometimes possible to see six gull species together – often with a Caspian Tern amongst them. More Bluethroats have arrived but there must surely be more to come and the same is true of Chiffchaffs, one of the most numerous species here in winter. With unseasonably warm weather being enjoyed further north, perhaps some of these migrants aren’t yet feeling the need to move south. The local Stone-curlews have been more difficult to see recently but can still usually be found. An Iberian Grey Shrike seems to have settled in the same area and we’re hoping it will stay around. 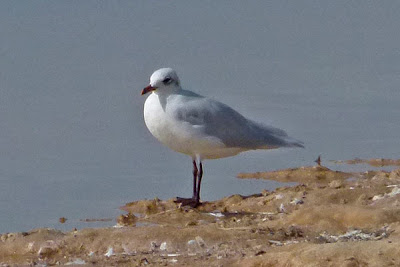 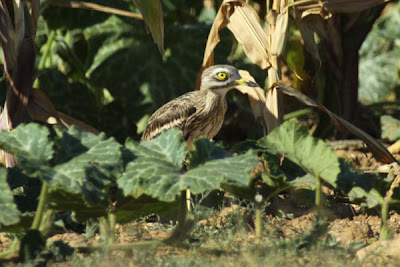 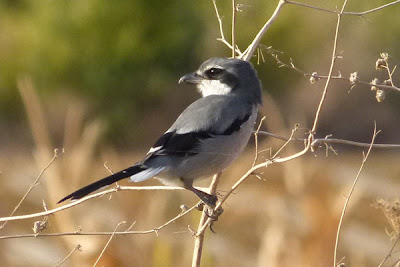 Iberian Grey Shrike
One afternoon we popped across the border into Spain and had a couple of hours birding around Isla Cristina. It’s not somewhere we often go but it made a change. We saw most of the regular wader species and, like almost everywhere else we’ve been this week, one or two Pied Flycatchers and Northern Wheatears. 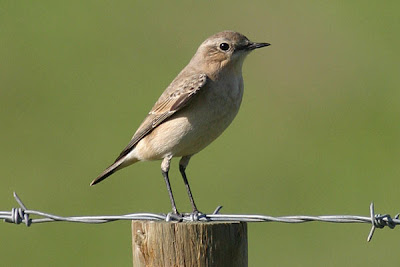 Northern Wheatear
Today we were at Castro Marim where several Black-necked Grebes were our first since our last visit to Cerro do Bufo.

As we’ve said before: so many birds, so little time!
Posted by Peter and June at 17:36