We spent this morning at Castro Marim. It is an indication of how awful the weather has been recently that this was our first visit there since New Year's Day. After all the rain, it was no surprise that the tracks and pathways were VERY muddy - fortunately, we had our wellies with us!

The morning started dull and cloudy and stayed that way until lunchtime - the sun made its first appearance just as we got back to the car after a four-hour walk! So our timing wasn't the best but at least it stayed dry and the temperature was quite pleasant. In fact the whole morning was very pleasant and it's remarkable that we could spend four hours on a Sunday morning at one of the Algarve's best birdwatching sites and not see another person. Literally, we saw nobody at all. Apart from hundreds of birds, we saw only two stray dogs and two Hares. Imagine having Titchwell RSPB Reserve to yourself on a Sunday morning!

Admittedly, this wasn't the best visit to Castro Marim that we've ever had. The morning's species list barely reached 70 and there were several notable absentees. When before have we been there and not seen a tern of any sort? What has happened to the Stone-curlews? It seems clear that quite a number of birds have moved on during the last couple of weeks, some of them presumably not liking the storms and resulting high water levels in most of the saltpans.

There are still a few hundred Greater Flamingos, plenty of gulls (six species including Audouin's and Slender-billed), plenty of longer-legged waders (mainly Black-winged Stilts, Black-tailed Godwits and Avocets) and we counted about 90 Black-necked Grebes and 60 Common Shelduck. A flock of about 25 Little Bustards in flight was one of the morning's highlights - we see them here regularly enough but they're not common elsewhere in the Algarve.

Not a good morning for photography but you have to try don't you? 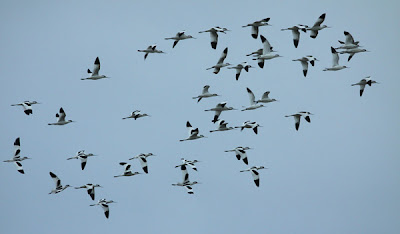 Greater Flamingos
Posted by Peter and June at 17:22