Well, Tuesday turned out to be the last warm, sunny, cloudless day of the week! The weather here has changed significantly during the last few days and although we haven't yet had the really good downpour that most people would welcome, it has now rained on three consecutive days and it is suddenly much cooler.

So we haven't been inclined to go very far this week! In fact all of our birding has been within a mile or so of home and most of it has been from the car. We've still managed to see about 75 species and although the light has mostly been pretty poor there have still been opportunities for photography.

It's well known that to see raptor passage in the Algarve you have to go to the Sagres/Cape St Vincent area and around Tavira we can't compete with the numbers of birds that are regularly seen in the autumn at the western end of the coast. However, in the last few days we have seen eight raptor species here which is not to be sniffed at! Following on from Tuesday's Booted Eagle and Common Buzzard, we have seen Black-winged Kite, Marsh Harrier, Hen Harrier, Common Kestrel, Peregrine Falcon and Osprey. In fact, we've seen two different Hen Harriers, one of them a 'ringtail', the other the male that is presumably the same bird that has been in the area for a month now.

There are still plenty of gulls here, mostly Lesser Black-backed, Mediterranean and Audouin's. We counted over 100 Audouin's yesterday and managed to read a couple of ring numbers which we have reported. No doubt, like previous ones, they will prove to be from the Ebro Delta in Spain. There are also a few Slender-billed Gulls around town - a rarity in most of Portugal but easily found here in the south-east of the country. 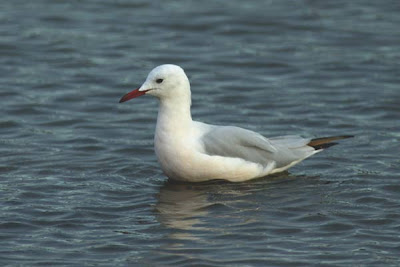 Slender-billed Gull
It's not too difficult at this time of the year to find twenty or more wader species here and we never get tired of photographing them, searching through them for a rarity and simply watching them. Most of them can be found feeding on the saltpans but some species use the saltpans only for roosting at high tide and they're the ones that have so far proved the most difficult to photograph. We're referring in particular to Curlew, Knot, Whimbrel, Oystercatcher and Bar-tailed Godwit. We were fortunate to photograph three of these this afternoon, unfortunate to do so without the benefit of any sunshine! 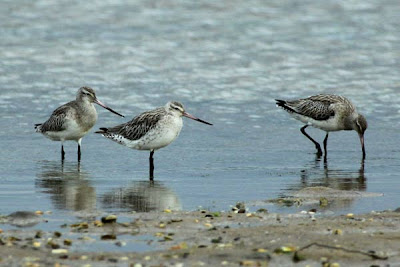 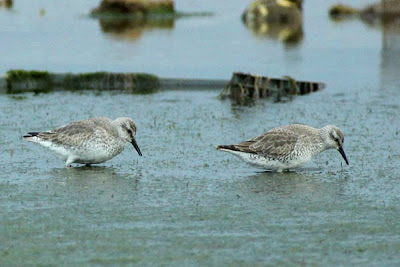 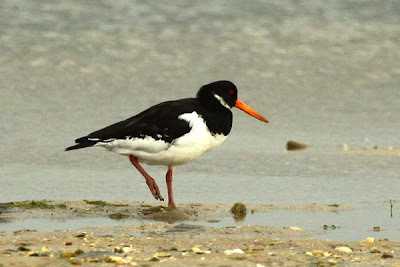 Eurasian Oystercatcher
Perhaps the most surprising birds found were two Razorbills at the mouth of the river at Quatros Aguas. This is a species that we have previously seen only much further west.

There's been enough rain to make the tracks through the saltpans pretty muddy so it looks as though we might need our wellies if we're going for a much-needed walk tomorrow.
Posted by Peter and June at 18:53

As a fairly frequent visitor to Tavira I was very pleased to stumble upon your blog, which makes for very interesting reading...

I have been visiting Tavira probably twice a year for the past 5-6 years, but am usually with non-birding pals, so my birdwatching opportunities have been few and far between! I guess, over the years, I have probably been able to have half a dozen actual birdwatching days, but (of course!) have always got BINs handy when driving to the beach or having a drink on the terrace - have to say that Tavira is one of the better places I know for seeing plenty of good birds even with such minimal effort.

I've picked up quite a few things whilst reading through your blog (for example, was unaware of nesting pallid swifts in the trees in the town!) and am starting to realise that this time of the year would be a good time to be out there. Our visits are usually late Spring and early Autumn, so good for some species, less so for others.

I was last out in Tavira in Sep, and managed a good deal more birding than usual as I came out a few days before my wife this time... if your are interested you can read my (brief!) trip report at http://www.birdforum.net/showthread.php?t=151695

Look forward to reading more about the area, particularly as the weather here in the UK is pretty dismal at the moment!

There doesn't seem to be a bad time to be here, Ray!

Do the Slender-billed Gulls overwinter in Tavira and if so where is the best spot to find them?

We've been able to find the odd one or two in December and January but they can be anywhere on the saltpans. There were 28 today at Castro Marim.