In recent years northern Ohio has become the most popular destination in North America for birders wishing to witness the arrival of migrant birds in the spring.  For some time we had been promising ourselves a visit there and at last this year we made it!

It did mean having to leave the Algarve much earlier than normal but the timing is crucial; after doing our research we decided that the third and fourth weeks of May should give us the best experience both in terms of the number of birds and the variety of species.  We also wanted to avoid the festival week as it attracts hundreds of birders to the area.  “The Biggest Week in American Birding” hosted by Black Swamp Bird Observatory was this year held from 3rd to 12th May; we were keen to avoid the crowds and arrived in Ohio on the 15th. 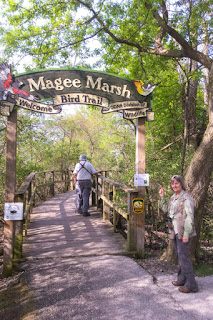 The best known site is Magee Marsh Wildlife Area located on the south side of Lake Erie.  It has become popular because the occurrence there of warblers, tanagers, thrushes, vireos and other neotropical migrants is much less dependent on weather conditions than it is at places such as High Island in Texas and Point Pelee in Ontario that were previously the two best-known spring migration hotspots. 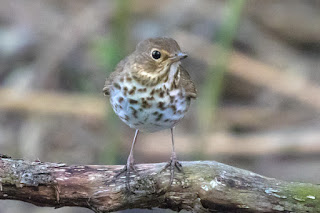 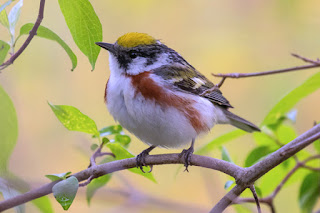 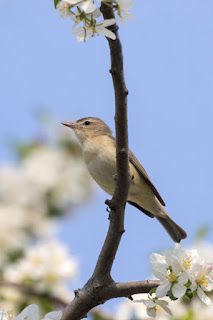 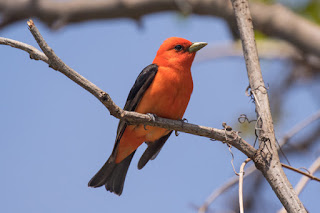 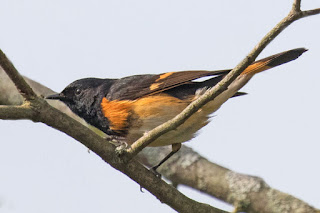 We have been fortunate in the past to make multiple visits to the USA, including tours in Texas for the spring migration at High Island and elsewhere. As a result we were already quite familiar with most of the species we were likely to see in Ohio and being on our own for once, we were under no pressure to chase around trying to see absolutely every species on offer. This was to be a relaxing birding trip with time taken for some photography.

However, most of our trips to the USA have been to the west and there were three species that we thought should be possible on this trip, which we hadn’t seen before.  These were American Woodcock and Black-billed Cuckoo, which are very much ‘eastern birds’ and Kirtland’s Warbler, which breeds in nearby Michigan and which we would probably have to travel to find unless we were lucky enough to see a migrant passing through Magee. 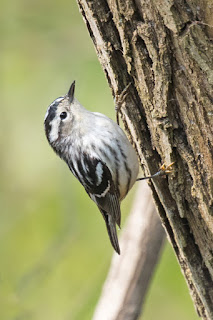 Also on our radar was Connecticut Warbler, a shy, skulking species which has the reputation of being one of, if not the most difficult of the warblers to see and which had previously eluded us.

We began with a six-night stay at Port Clinton, which gave us five days within easy reach of Magee Marsh and we went there for at least part of each of those days. On every visit the ‘famous’ boardwalk through the marsh was well-populated with birders and photographers but never to an extent that it felt overcrowded. The whole place was also full of birds.  We managed to see 22 warbler species and we were delighted that these included a Connecticut Warbler.  Other migrants included four vireo species, half a dozen or so flycatchers, Baltimore Oriole, Grey-cheeked & Swainson’s Thrushes and another of our targets, Black-billed Cuckoo.  Sadly, there was no sign of American Woodcock and hardly a mention of one. 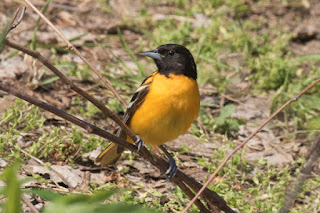 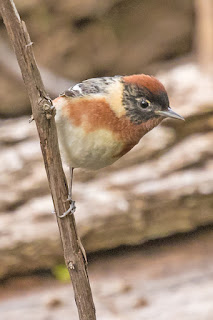 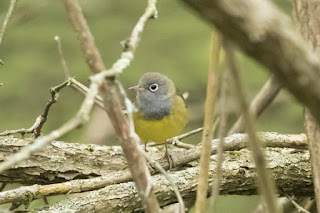 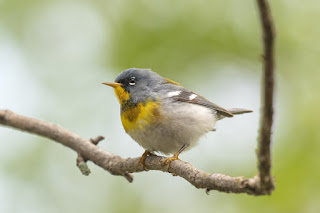 In the same general area, we visited Ottawa National Wildlife Refuge, Oak Openings Preserve Metropark, Maumee Bay State Park, Howard Marsh Metropark and Black Swamp Bird Observatory. There were other options available but Magee Marsh was excellent throughout and there were enough birds everywhere to more than satisfy us.  In fact, we even cancelled our planned trip to Cleveland and the Rock & Roll Hall of Fame because the birding was so good! 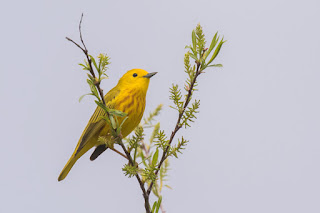 Eventually we moved on into neighbouring Michigan, spending a very enjoyable couple of hours first of all at the Motown Museum in Detroit.  Here we saw the famous Studio A where so many hit recordings were made between 1959 and 1972 by Smokey Robinson & the Miracles, the Supremes, Stevie Wonder, the Jackson 5, the Four Tops and others.  We even got to sing a long to the Temptations' 'My Girl'!

The afternoon was spent birding at Shiawassee National Wildlife Refuge located five miles south of the city of Saginaw where an Orange-crowned Warbler, two Sandhill Cranes and several Wild Turkeys were among several species that we hadn’t seen earlier in Ohio.

Next we went further north to Oscoda for a four-night stay on the shore of Lake Huron.  The main birding locality here is Tawas Point State Park, another well-known site for migrants while nearby is Tuttle Marsh Wildlife Area.  Much of our time was spent visiting these two areas but we also enlisted the help of local birder and guide, Matt Hegwood to make sure we saw our remaining target species, American Woodcock and Kirtland’s Warbler.  Matt took us to various places, mostly within the Huron-Manistee National Forest and his local knowledge was invaluable. 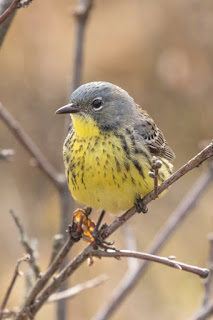 At Tawas Point we found a very similar selection of migrants to those we had seen at Magee Marsh and again in very good numbers.  Further additions to the growing list of warblers were a Mourning Warbler and a Black-throated Blue Warbler.  As well as warblers and vireos there were Bobolinks, Cedar Waxwings and Brown Thrashers and at the end of the peninsula, shorebirds, notably more than 200 Whimbrel. 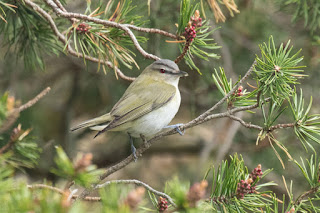 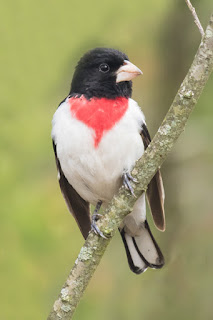 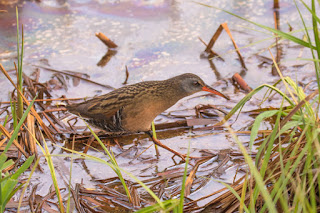 Matt very soon found for us a pair of Kirtland’s Warblers that we were able to see at very close range.  Almost extinct 50 years ago, this species has recovered well as large areas of its favoured jack pine forest habitat have been managed to meet its needs and large numbers of Brown-headed Cowbirds have been removed.  It is reported that in the 1960s, 70% of warbler nests were parasitized by cowbirds reducing the number of warbler chicks to fewer than needed to perpetuate the species. 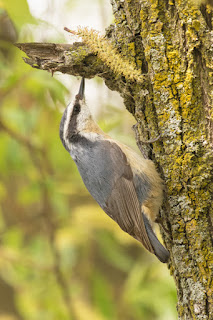 That left just the American Woodcock to find, which Matt duly did although it did take two attempts.  Eventually, we saw and heard the display flight and heard the strange ‘peent’ call of a bird on the ground just a short distance along the track from where we were standing.  All this was, of course, at dusk in fading light; while we were waiting for the action to start we watched Common Nighthawks overhead and then, just a few yards away, an Eastern Whip-poor-will began singing.  All in all it was a memorable experience.

After ten days birding in Ohio and Michigan we moved on again and enjoyed two visits to Indiana Dunes State Park, situated on the shores of Lake Michigan but, of course, in the state of Indiana.  Just to confuse things further, we stayed overnight in Michigan City, which itself is in Indiana!

Although we enjoyed a few sunny days during the trip, we also had our share of cold days and rain.  The most extreme weather came while we were in Michigan City in the form of a severe thunderstorm and a tornado that eventually passed by about five miles to the south of us leaving all sorts of damage in its wake.

Indiana Dunes State Park was excellent.  As well as more than three miles of beach and towering sand dunes there is visitor centre with bird feeders and a network of forest trails where we found lots of interest.  Highlights among the birds were again the warblers including Mourning, Prothonotary, Magnolia and two additions to our list, Worm-eating & Cerulean.  On our second morning there we ran into Kyle Wiktor who had been carrying out a visible migration count, which had included a remarkable 8,681 Cedar Waxwings! 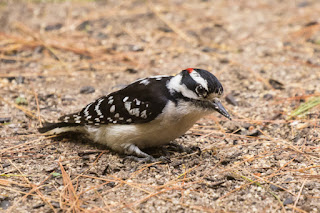 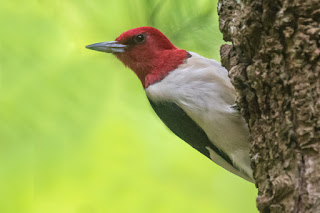 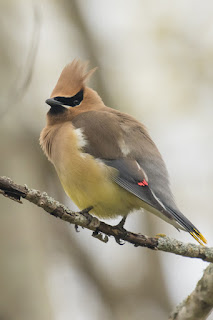 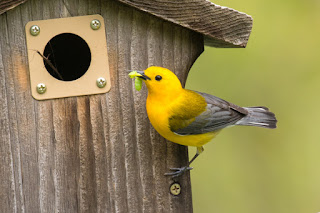 From Indiana we drove into Illinois to stay with family for a week.  During this time there was a day trip to see the sights of Chicago but the birding continued.  We were staying within easy walking distance of Burnidge Forest Preserve and made four visits there.  The area has a nice mix of habitats that includes oak woodland, marshes and restored prairie.  The birds were mostly species we had seen before on the trip but at last we got good looks at Eastern Towhee and Field Sparrow and it was good to have both Alder and Willow Flycatchers singing.  By now it was early June and there wasn’t much evidence at this inland site of any migration in progress.  Obviously, it was time to come home! 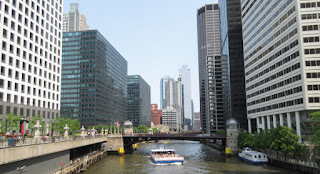 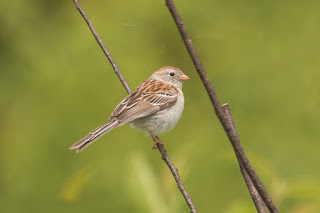 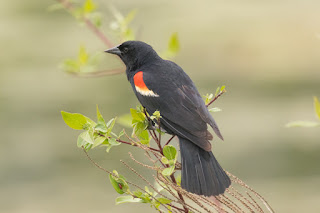 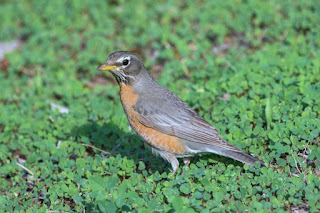 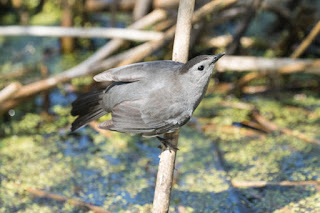