Estonia in early May - 2

The second instalment from the Avian Adventures tour in Estonia:

After staying out late the previous night we had a delayed start on the morning of Day 5 with breakfast in the hotel at 7.00 a.m. and departure an hour later.  Today we were moving from Pärnu to Tartu, the second largest city of Estonia.

Before long we entered Soomaa National Park where one of the first birds seen was a Lesser Spotted Eagle and this was quickly followed by another.  Both birds were perched and seen well from the minibus.  Next was a White-backed Woodpecker, seen briefly by those of us who had a view out to the right of the vehicle.  Unfortunately, it didn’t stay to be admired and although we got out of the minibus to look for it, it wasn’t seen again.  We walked along the road and did see a Great Spotted Woodpecker and we heard the drumming of a Lesser Spotted (Woodpecker) but these were hardly consolation.  We heard a Cuckoo calling, a Redwing was singing and a Green Sandpiper passed over. 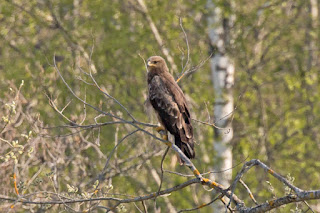 Eventually, we set out on the Hüpassaare hiking trail that winds first through forest and then on a boardwalk to the Kuresoo bog.  Thick layers of peat have formed here, preventing the vegetation from reaching nutrients in the ground below. The soil is poor and acid and the trees, even the very old ones, look like small miniatures.  It was interesting even if the bog itself wasn’t particularly bird-rich.  Species seen in the wooded area included Wood Warbler, Marsh Tit, Common Rosefinch and Pied Flycatcher, while the bog held Teal, White Wagtail, Tree Pipit, Lapwing, Common Gull and a distant Great Grey Shrike.  A Common (Viviparous) Lizard was seen very briefly. 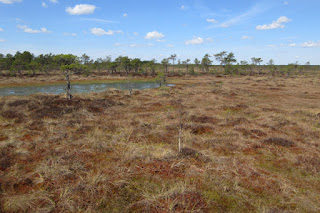 After dinner at the rather quirky Hansa Hotel we drove out of Tartu to Kärevere to see Great Snipes lekking.  It has to be admitted that this was not a great spectacle!  Although the Great Snipes did indeed jump into the air they were too far away for their sounds to be well-heard (if at all) and by the time there was any action the light was really poor.   In fact the Great Snipe were totally eclipsed by a Hobby that put on a wonderful flying display while we were waiting for the waders to perform.  Also seen were Lapwings, Wood Sandpipers, roding Woodcock, a Common Buzzard, a Red Fox and several geese, (probably Greater White-fronts) that arrived late.  The soundtrack to all this, as so often during the week, was the song of Thrush Nightingale and Cuckoo.  It was 10.30 p.m. when we arrived back at the hotel.

Next morning, we left the hotel at 6.00 a.m. taking breakfast with us.  We travelled east from Tartu to the Järvselja Primeval Forest, protected as a nature reserve since 1924.  Once there, we set off on a boardwalk through the forest and either saw or heard a good selection of bird species most of which were familiar from back home.  These included Cuckoo, Wren, Chiffchaff, Wood Warbler, Blue, Great, Willow & Long-tailed Tits, although the last of these was a bird of the white-headed caudatus race.  A Woodcock was flushed from beside the trail and quickly flew off out of sight.

Once again our particular targets here were the woodpeckers and three species were recorded in fairly quick succession.  These were Great Spotted, White-backed and Grey-headed.  A Grey-headed sat motionless and we had great views of it through a telescope.  Sadly, the White-backed wasn’t as obliging.  Soon after this flurry of woodpeckers, a Spotted Nutcracker made its presence known (at least to Tarvo!) and it was soon located perched at the top of a tree close to the trail.  As we raised our binoculars it flew and that was the last we saw of it.

Later we drove to what was obviously a huge lake; it proved to be Lake Peipus, the fifth largest lake in Europe and across the other side we could see Russia.  We had just a short walk here but it was notable for giving us our best view of the week of a Thrush Nightingale, a species heard everywhere but usually from deep cover.  There were good views of Garganey and Great Crested Grebes and several Common Whitethroats were seen.  A flock of more than 50 Cormorants flew over and after circling for a while landed on the water. 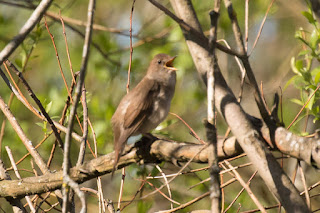 For an early lunch we went to Mooste Viinavabrik, a former vodka distillery and now a guesthouse and restaurant, quite an impressive location next to scenic Lake Mooste.  Afterwards we had a short walk nearby without finding many birds, although again we saw a Nuthatch that was clearly different from those we see further west in Europe having a white breast. 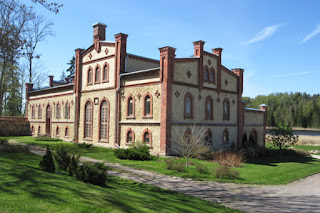 Later we went to the Aardla wetlands visiting two separate areas.  At the first there were thousands of Great White-fronted Geese, two Common Cranes, about 10 Goldeneyes, a pair of Great Crested Grebes, at least one pair of Marsh Harriers, a Common Raven plus Whinchat and Reed Bunting.  A dragonfly here was identified as a Downy Emerald. 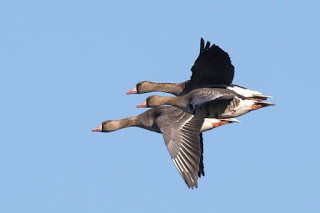 The second area had many more birds, including many thousands of geese, mostly Greater White-fronts.  At one point, presumably spooked by a White-tailed Eagle, each and every one of these geese took to the air creating a noise reminiscent of a passing freight train!  It was quite a sight and sound!  There was a nice selection of ducks that once again included Garganeys and there were at least three Red-necked Grebes.  Two Black Terns here were the first we had seen.

Breakfast on Day 7 was at 7.00 a.m. and departure from the Hansa Hotel just an hour later.  Today was our last full day in Estonia and a day when we had to travel back to Tallinn, a distance of only about 190 km.  This meant that there was plenty of time for birding on the way and we began at Ilmatsalu where the fishponds proved to be quite productive.

The most memorable birds at Ilmatsalu were those that required some effort and persistence to see.  Savi’s Warblers reeled from the reed beds and Great Reed Warblers croaked; eventually there were reasonably good views of both species.  A Marsh Warbler sang from cover but finally gave us a glimpse; most difficult to see was Penduline Tit but we did after a while get one to show itself.  A Red-breasted Flycatcher was unexpected in this habitat and was presumably a newly arrived migrant.  It was a relief to see this bird having heard several during the previous two days.  Other notable birds here were a Common Rosefinch, about 20 Little Gulls, a pair of nesting Whooper Swans, a Red-necked Grebe, an Osprey, a Marsh Harrier and a flock of Black Terns. 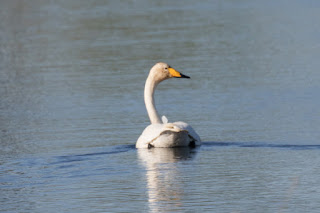 Next we went to the village of Puurmani where a walk by the lake in Puurmani Mõisa Park resulted in us having a good view of a singing Icterine Warbler as well as both Spotted & Pied Flycatchers.  A pair of White Storks were on a nest and obliged with a bout of bill-clapping.  A Wryneck was heard briefly but failed to reveal itself. 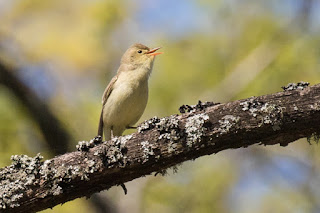 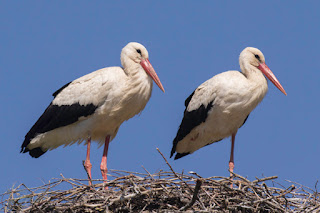 We completed our jorney to Tallinn with lunch on the way at  Põhjaka Mõis where we also saw a Lesser Spotted Eagle.  In Tallinn we checked in at the Hestia Euroopa Hotel and at this point we had to say good-bye to Tarvo who had been an excellent guide and good company throughout our trip.
Those of us who used a period of down time before dinner to take a walk outside and explore the city a little were rewarded by finding a spiffy male red-spotted Bluethroat in a fairly unlikely-looking city centre setting.  Unfortunately, it could not be found again when we returned later.  It was presumed to be a recent arrival that after feeding had quickly moved on in search of a more suitable location.
Our last morning was spent on a ‘proper’ guided tour of Tallinn Old Town.  Said to be the best preserved medieval city in Northern Europe boasting Gothic spires, winding cobblestone streets and enchanting architecture, the Old Town was designated a UNESCO World Heritage Site in 1997.
After lunch at Kuldse Notsu Kõrts (The Golden Piglet Inn), we walked back to the hotel to await our taxi to the airport. 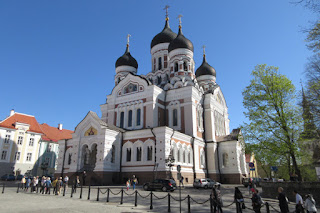 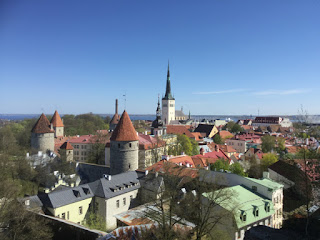