Among the countess numbers of birds that arrive here from the north in the autumn are many thousands of ducks.  The most numerous are Eurasian Wigeon, Northern Shoveler, Gadwall, Northern Pintail, Eurasian Teal and Mallard but Tufted Duck and Common Pochard also occur and from time to time there are surprises.  In November 2007, for instance, we found a Ring-necked Duck at Altura; in 2009 we saw a Blue-winged Teal at Castro Marim and in 2010 a Green-winged Teal was found at Lagoa dos Salgados - three rarities presumed to have originated from North America.

About ten days ago there was another surprise with a report that a drake Falcated Duck had been seen at a wastewater treatment pond near Faro.  This is a species that breeds in central and eastern Siberia and winters in China and Japan.  It is an attractive bird, popular for inclusion in waterfowl collections and so the origin of the few birds that occasionally show up in Western Europe is always the subject of debate.  Are they long distance travellers or simply escapees from somewhere relatively nearby?  Over the years there have been records in the UK, The Netherlands, Austria, Ireland and Sweden among others, including one previous bird here in Portugal, in 1995.

Not surprisingly, that 1995 record resulted in Falcated Duck finding its way only as far as Category ‘D’ of the SYSTEMATIC LIST OF THE BIRDS OF MAINLAND PORTUGAL, a status reflecting the possibility or perhaps likelihood that the bird originated in captivity. 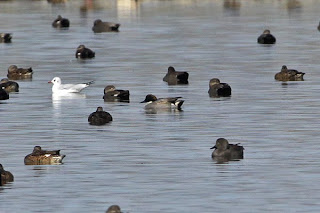 Against this background then we didn’t feel the need to immediately drop everything and go looking for the Falcated Duck when we first heard about it.  However, yesterday, along with our friend, Ray Tipper, we made one of our occasional visits to the site where it had been seen and much to our surprise found that it was still there.  It was with a flock of about 2,000 Gadwall, a species to which it is closely related and which it resembles somewhat, although at a distance it might more easily be mistaken for a Northern Pintail.  Where it has come from we'll probably never know but the chances seem slim that the Portuguese Rarities Committee will accept it as being a vagrant from the Far East.

Already searching through the ducks when we arrived were João Tiago Tavares, Fábia Azevedo, António Cotão and Thijs Valkenburg.  Earlier they had seen another rarity, a drake American Wigeon among the flock of several hundred Eurasian Wigeon that had been present.  Unfortunately, all of those birds had been disturbed and headed off to the Ria Formosa but hopefully, this latest visitor from North America will stay around through the winter and we can find it on our next visit.

That was enjoyable to read, thanks for posting it.

Feel free to surf to my web site Bing (http://www.bing.com)