We’ve been across the border to Spain a couple of times recently, to the Marismas del Odiel, to Doñana and in particular to La Dehesa de Abajo.

Usually our trips to Doñana are one-day affairs involving early starts from Tavira and returning late.  Our most recent trip was like that.  However, a few weeks back we had a leisurely journey, stopping off on the way for some birding at the Marismas del Odiel and then staying overnight in Aznalcázar at the very nice Hacienda Olontigi.

Our main reason for the overnight stay was to give ourselves several chances to photograph Iberian lynx.  We went with three friends from Tavira and in Aznalcázar we met up with Beltran Ceballos Vazquez and Sergio Asian González, both of whom are involved in the lynx re-introduction project and whom we know from previous trips to Andalucía.  This trip was the result of a conversation that we had with the two of them at the Birdfair at Rutland Water in August.

Sadly things didn’t work out quite as we and they had hoped.  Partly this was the result of the weather - there was persistent rain that really didn’t encourage us or any lynx to be out and about; also there was some bad luck in that we visited several potential sites and were simply at the right place at the wrong time.  While we were at Site A, what looked from the photos captured by a camera trap to be three different lynxes were at Site B!

In spite of some miserable weather and missing out on our main target, we had an enjoyable couple of days.  The birding at La Dehesa de Abajo was very good - thousands of roosting White Storks were quite a sight and there was a good selection of waders and ducks.  We also took the ferry across the Rio Guadalquivir at Coria del Rio and spent an afternoon in the Paraje Natural del Brazo del Este where Glossy Ibises were particularly numerous.  There were no rarities, just plenty of birds, amongst them Black Stork, Osprey, Great Egret, lots of Marsh Harriers and various common passerine migrants. 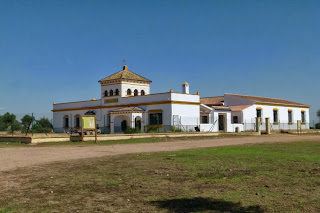 Last week, we didn’t take much persuading to go back to La Dehesa de Abajo just on a day trip.  On this occasion the weather was superb but we were there for the birds and there was no chance to look for any lynx.  If anything there were even more birds than earlier - just by counting five species (White Stork, Greater Flamingo, Glossy Ibis, Northern Shoveler and Black-tailed Godwit) we estimated more than 12,000 birds.  The departure from the lagoon of several thousand White Storks was followed by the arrival of wave after wave of Glossy Ibises, a spectacle that on its own made the journey worthwhile.  We also saw there a Red-knobbed Coot, a late Bee-eater and lots of waders that included several hundred Avocets; not too far away, we watched a Spanish Imperial Eagle. 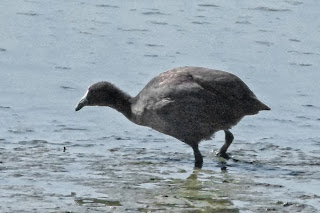 Red-knobbed Coot - from a hide that faces into the light

It’s great to see the visitor centre at La Dehesa de Abajo open and being able to buy some lunch there made a change from the sandwiches that we’ve been having day after day.  The new regime has plans for more hides to be provided at some stage and it would be nice if there could also be some modifications to the two existing ones which like most hides in this part of the world are poorly designed and badly sited.

We will be planning an early return to La Dehesa de Abajo and to other parts of Doñana.  It won’t be long before Common Cranes arrive!  And, of course, there’s also the lynx to be photographed.