Beidaihe is a popular beach holiday resort on China’s Bohai Sea coast but has also long been known as a migration hotspot visited by birders from the UK and elsewhere.  The Jinshan Hotel in Beidaihe was our base for the first part of our trip and as well as pre-breakfast birding in the grounds there and at the nearby Friendship Hotel, we visited local sites known as “the Reservoir”, “the Sandflats”, “Lotus Hill Park” and “Lighthouse Point”.  All of these provided us with interesting birding but unfortunately without ever producing the numbers and variety of migrants that have been seen in the area in previous years.

Of these local sites “the Reservoir” was probably the most productive in terms of the number of species seen.  It is actually a wetland park used for recreation by ‘China’s leaders’ and as a result not always open for visits by mere birders.  Amongst the birds seen there were Vinous-throated Parrotbills, Falcated Ducks, Amur Falcons, Eastern Spot-billed Ducks, Taiga Flycatcher, Brown Shrike, Olive-backed Pipits, Black-faced Buntings, Chinese Penduline Tits, Yellow-browed, Radde’s & Dusky Warblers and a selection of herons that included Chinese Pond Heron and Yellow Bittern. 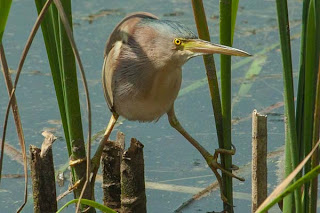 We also had day trips out from Beidaihe to the Jiaoshan Great Wall and to the Qinglong River and an excursion with an overnight stay to Old Peak.  All of these were enjoyable and reasonably successful.

We were at the Jiaoshan Great Wall on a particularly windy day which wasn’t at all good for birding but we did manage to find a Plain Laughingthrush, Godlewski’s Bunting and Large-billed Crows that we initially mis-identified as Ravens.  It was interesting to see the Great Wall even though much of what we saw was a repaired or re-built section.  We were actually very lucky to be there at all as the whole site was officially closed to tourists and we had to have a special permit to enter.  This meant that we had the Great Wall to ourselves without having to contend with any other visitors. 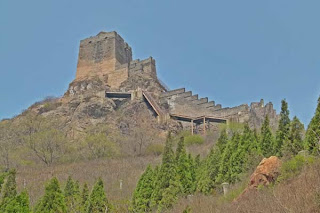 Part of the Jiaoshan Great Wall

Our stop at “Stone River” on the way back from the Great Wall to Beidaihe was also badly wind-affected but Grey-tailed Tattlers, Sharp-tailed Sandpipers and Pacific Golden Plovers were especially pleasing to see for the wader enthusiasts amongst us.  A flock of Yellow-bellied Tits were also fun to see at very close range, seemingly oblivious to our presence.  Another visit there on a better day would have been nice. 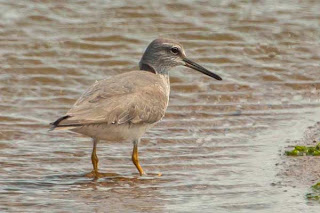 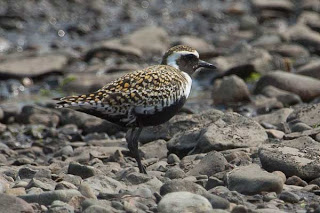 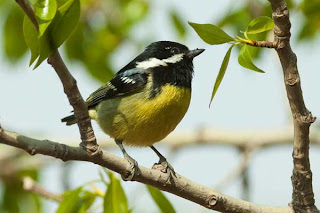 Our day trip to the Qinglong River had two main targets: Ibisbill and Long-billed Plover.  I must say that I had no great expectations about seeing either of these birds but after some searching we managed to find both species.  First we came across a pair of Long-billed Plovers, a comparatively little-known wader of freshwater rivers.  Later, in similar habitat, when some of our group seemed ready to give up the search, we found a pair of Ibisbills with young.  The Ibisbills were probably the birds of the entire trip for me.  It’s a species that is sufficiently distinctive to merit its own family, Ibidorhynchidae.  They aren’t rare but their habitat and range do make them somewhat difficult to see; they were high on my list of reasons to sign up for this trip. 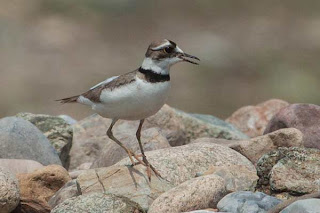 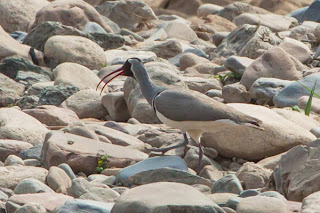 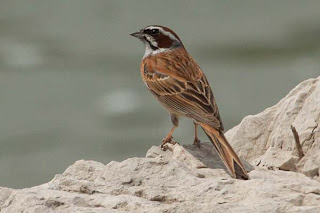 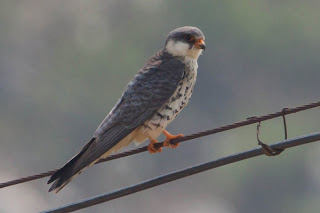 We were also successful in finding our main target species at Old Peak where an early morning start brought us a good but rather brief look at a pair of Koklass Pheasants.  There was no chance to think about a photograph!  These are elusive birds of high altitude forests so we were very lucky to see them as well as we did!  Koklass is apparently a word that is onomatopœically derived from the bird's territorial call, although it requires some imagination!  Also at Old Peak we saw Pale Thrush, Grey-sided Thrush, Claudia’s Leaf Warbler, Hume’s Leaf Warbler, Chinese Nuthatch, Yellow-throated & Tristram’s Buntings and Daurian Redstarts.  The hotel there was a bit funky and surrounded by building work in progress but then, much of China appears to be a building site! 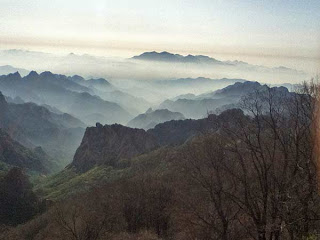 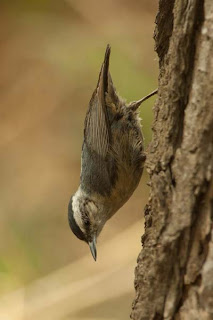 Happy Island, our next destination for a four-night stay, was certainly a building site. More on China follows soon…

Very nice post. Loved to read about the Ibisbill and Long-billed Plover. Is it possible to get the GPS location of both species? Where exactly have you seen them? Thanks for it.

Hi Szimi
Thanks for your comment and your enquiry. As it happens, I don't have the GPS location for the Ibisbill and the Long-billed Plover but even if I did I think I would have to show due respect to the local guides who took us to look for these birds and not give away their 'secrets' by publicising the co-ordinates.
I'm sure you will understand.