A website with the title “50 Best Birds in the World” attempts to rank birds based on how impressive, how unique, how rare and how hard to find they are.  It has the Horned Guan (Oreophasis derbianus) listed at No 6. 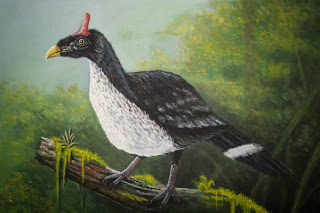 The Horned Guan is unmistakable in appearance with a red horn of bare skin on the top of its head; it is said that, although classified as a member of the Cracidae, it is not a true guan and it is placed in the monotypic genus Oreophasis; its range is restricted to south-east Mexico and Guatemala; it lives in remote cloud forests high on the slopes of extinct volcanoes.  Based on the stated criteria, there is clearly a good case for describing it as one of the world’s top ten best birds!

Apparently there are easier places in Guatemala to see Horned Guan than Los Tarrales and the Atitlán Volcano but that’s where we were and so when offered the chance it seemed worth a try.  I was warned that it wouldn’t be easy.

Breakfast (or at least a cup of coffee) was at 2.15am after which we drove from the reserve headquarters for about an hour until we could apparently go no further by vehicle.  It was hard to tell – it was very dark!  I was told that we were at an elevation of 1,450m and that the climb up the side of the volcano would take about three hours. 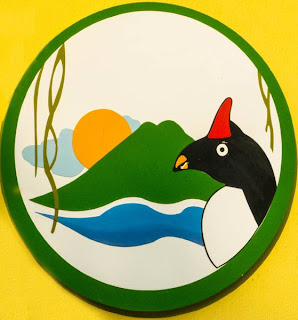 At the start it was fun walking through the coffee plantation by the light of our head torches and seeing the occasional roosting Swainson’s Thrush.  It was quite a while before any more birds were seen, although eventually there were a few identifiable sounds: the calls of Mexican Whip-poor-wills, the rattling produced by the wings of Highland Guans and the fluty song of Brown-backed Solitaires.

Before too long the climb became steeper and more difficult.  This was not one of those winding trails that makes its way gradually uphill, this was straight up, no messing!  Underfoot the ground was dry, soft and crumbly and covered in several inches of leaf litter.  It was very difficult to get any traction and a stick was essential in order to make progress.  Carrying food and drink, a Canon 50D and a 100-400mm lens didn’t make things any easier.  After a couple of hours I thought I might die; after three hours I thought dying might be the preferred option!

By 6.00am there was enough light that I could switch off my head torch.  An hour later there was sunshine but with this improved visibility came the realisation that most of the group, including three local guides, were some way ahead.  Being more than 20 years older than almost everyone else was proving to be a disadvantage.

Then came the good news that a Horned Guan had been sighted.  The bad news was that in order to try and see it I would have to leave the trail and make my way through dense vegetation across a steep slope.  This was even harder than before and more than once I found myself clinging to a branch or a root to prevent sliding down the mountain side.  But this was to see one of the world’s best birds, I kept telling myself.

At last I saw Eduardo Ormaeche.  He was sitting on the ground and looking through a telescope presumably at a Horned Guan.  He was no more than ten metres away.  Then, as I struggled to join him and get a look at the bird, he turned, looked at me and quietly said, “It just flew off”.  My heart sank.  In dense forest there was no possibility of seeing where or how far it had gone.  After four hours of effort, I had missed seeing it by no more than a few seconds.

The choices now were either to continue uphill and hope to re-locate the bird (or find another one) or instead give up and start the long downhill walk.  We were now at 2,100m, I had climbed something like 650 vertical metres.  It didn’t take much thinking about.  After eating the breakfast I had carried with me, I joined the others and downhill we went.

It was three hours before we reached our vehicle.  By then I had seen Emerald-chinned Hummingbird, Black Thrush and Blue-crowned Chlorophonia that I hadn’t seen before and that was some consolation.  I often hear it said that if birding was easy, we wouldn’t be doing it and I’ve no doubt that’s true.  In spite of not seeing the bird I wouldn’t have wanted to miss the Volcán Atitlán experience.

I shall hope to see a Horned Guan on my next visit to Guatemala but I will make sure to look somewhere other than Los Tarrales!