One Long-tailed Duck or two?

We were still in the UK following our tour in Colombia when we received a message through our website from Peter & Sally Hudson telling us that on 18th January they had seen a Long-tailed Duck near Odiáxere.  They are not birders but clearly knew enough to recognise that it was something unusual and they took a photograph with the intention of identifying the bird when they had access to a book or the internet.

Although we quickly alerted birders in the Algarve about the Long-tailed Duck there have been no reports of anyone going to look for it let alone anyone seeing it.  Considering that this is the first of this species in the Algarve since the one that we found at Castro Marim in 2007, this is a bit surprising but it is an indication of the level of birding activity here, particularly in the winter.

When we returned here a week ago we had more than enough to see and do without making a 200km round trip to Odiáxere on the off chance of finding a Long-tailed Duck which was last reported 12 days ago!  We did wonder though and we still do!
This morning while we were out surveying one of our squares for SPEA's Atlas of Wintering and Migratory Birds, we received a call from our friend Filipe Moniz to say that there was a Long-tailed Duck at Castro Marim, close to the Visitor Centre.  We were a half hour’s walk away from the car but then only a 7km drive away from where he was watching the bird so, of course, we went. 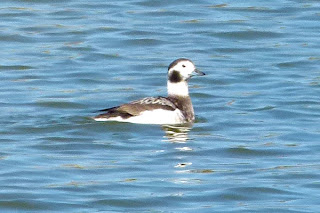 So now we’re wondering whether this is the same bird seen by the Hudsons that has moved along the coast or whether it’s a second one.  Looking at the two photographs, we’re inclined to think that two birds are involved.  What do you think?  It’s just possible that someone could settle the issue by going to Odiáxere!

The long tailed duck can still be seen at Castro Marim from the bird observatory looking towards the Guadiana bridge. My wife, brother, sister-in-law and I saw it on the 11th February 2013. Sighted again yesterday by a friend, Graham Edmondson. Warden at the observatory also alerted to it's presence by my brother yesterday 15th February.
Pat Conneely

The Long-tailed Duck that we found at Castro Marim in December 2007 stayed in the area for more than two months so a long stay is not unusual.