After many years of involvement with bird censuses and surveys in the UK, it was only natural that we would want to take part in Projecto Arenaria, the Portuguese equivalent of the Non-estuarine Coastal Waterbird Survey run by the BTO.

The stretch of coast that we were allocated to cover was on the Ilha de Cabanas, one of several barrier islands that are part of the Ria Formosa. Contrary to what many visiting birders seem to think, the Ria Formosa is a complex of coastal saltwater lagoons and barrier islands, with extensive mudflats, sand banks, dune systems and saltmarshes that covers 16,000 hectares and stretches some 60 kilometres, from Manta Rota in the east to Ancão in the west. It was designated as a wetland of international importance under the Ramsar Convention in 1980. It is not just the small area around Quinta de Marim where the visitor centre is located!

The advice we received was that at low tide we could walk across to the Ilha de Cabanas. “It´s very easy to get to the island without getting wet”, said the email; it made no reference to the duration of that window of opportunity, nor the possibility of similarly staying dry when making the return to the mainland! Fortunately, it’s an area that we know pretty well so yesterday we ignored the advice, played safe and used a boat, specifically a water taxi from Cabanas operated by our good friends at Sequa Tours. 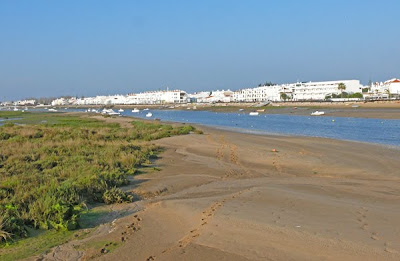 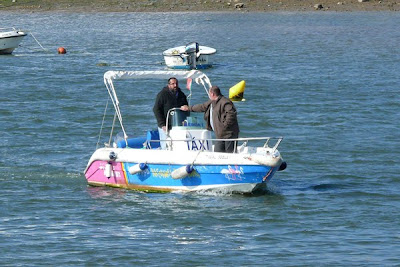 Our taxi to the island
There was a cool breeze from the east but the sky was clear and it was a perfect morning for a walk on the beach. As well as counting birds, we were required to count people and it was surprising that in two hours we saw only 14, mostly locals fishing in the surf. It was not so surprising that we found few birds. Our experience is that beaches such as this one generally hold little more than a few Sanderlings and flocks of loafing gulls, while on the food-rich tidal area on the other side of the island you can see hundreds of waders, gulls and terns. Still, we had a job to do and so we walked along the seaward side where Lesser Black-backed Gull (550) was the most numerous species and there were indeed 11 Sanderlings; the highlights were 20 Audouin’s Gulls. We recorded only six of the species that are targeted by Projecto Arenaria but we had a thoroughly enjoyable morning. 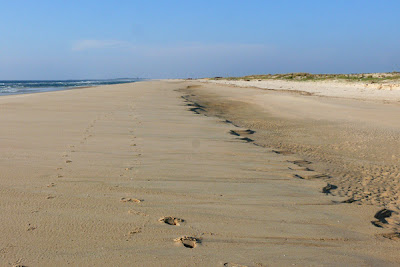 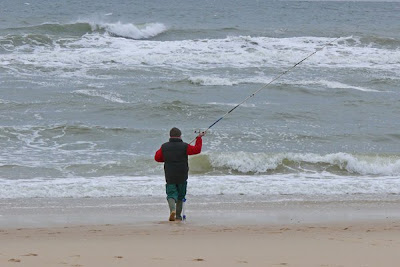 ...most of them fishing.
We enjoyed ourselves so much that we quickly volunteered to cover another stretch of beach and this morning saw us walking along the sands from Altura to Castela Velha, just outside and to the east of the Ria Formosa. No worries this time about needing a boat but we certainly needed another layer of clothes as the easterly wind strengthened, there was total cloud cover and the temperature dropped quite sharply. It being Saturday and this being a much more accessible beach, there were more people in evidence (34) but again most of them were fishing. As well as birds and people, we were also asked to count the number of dogs not on a leash; yesterday we saw none at all but today there were four. As for birds, it was a similar story to yesterday with Sanderling and Lesser Black-backed Gull the two most numerous species actually on the beach. However, there were a few more birds offshore, including Northern Gannets and Great Cormorants, a couple of Great Skuas, a dozen or so Sandwich Terns, a Caspian Tern and surprisingly, a flock of 12 Common Shelducks. 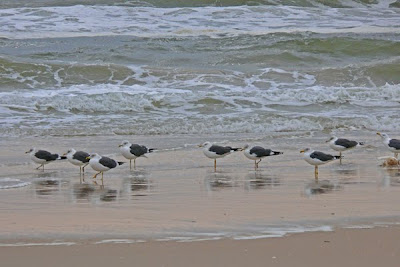 Sanderlings
So, not great birding but hopefully our results will be a useful small part of the bigger picture put together by Projecto Arenaria; also we got to a couple of places we wouldn’t otherwise have visited and had some much-needed exercise!
Posted by Peter and June at 20:03