An unusual concentration of fish trapped in one of the salt pans here in Tavira has been attracting numerous birds these past few mornings. Up to 80 Spoonbills and about 50 Little Egrets have been joined by smaller numbers of Cormorants, Grey Herons, White Storks and a single Great Egret.

The fish seem to have been of a size to suit these larger birds but both Caspian & Sandwich Terns have been joining in and have presumably been able to find some smaller ones. Gulls, too, have been looking for a cheap meal, a few Lesser Black-backs but mostly Slender-billed and Black-headed. 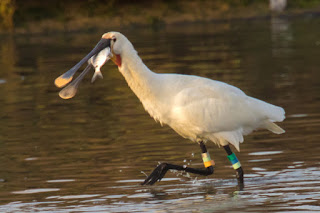 It’s not an ideal site for photography but it has been hard to resist trying to get some images. I used a Canon EOS 7D Mk ll with a 100-400mm lens and a 1.4x extender but would have liked to get closer. 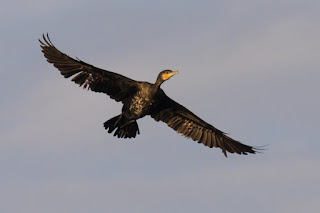 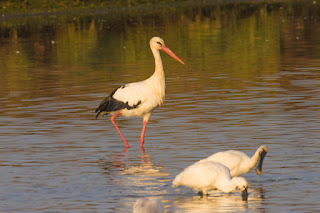 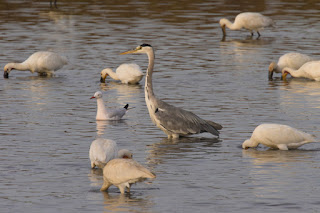 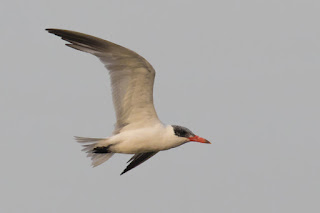 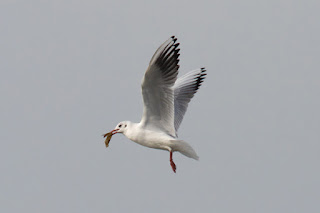 It was no surprise to find that some of the Spoonbills were colour-ringed but the depth of the water made it difficult to record the details. As so often, taking the ring details from the photographs was the best plan.  Full details are still awaited of the five birds reported but it looks as though three were ringed in The Netherlands and one each in France and Portugal.  One of the Dutch birds we have actually seen here before in 2011 and 2013; it's a female ringed in 1999. 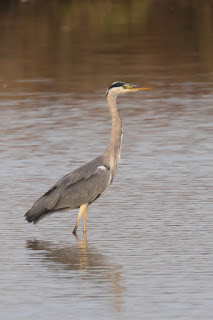 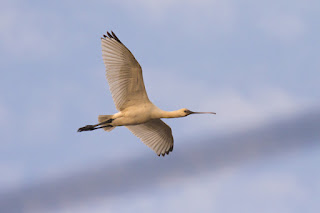 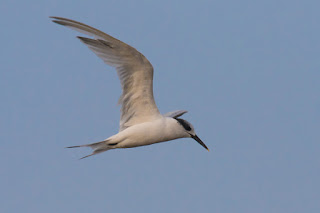 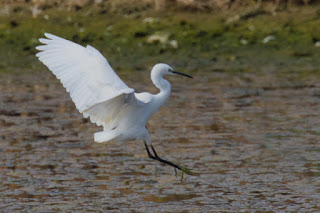 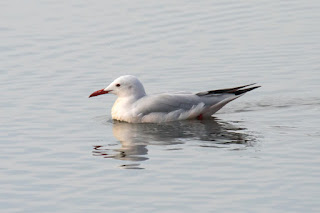 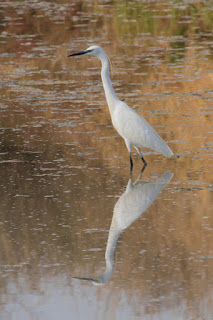 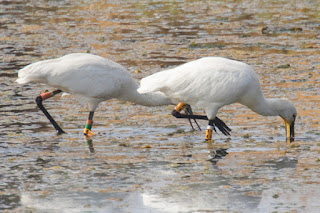 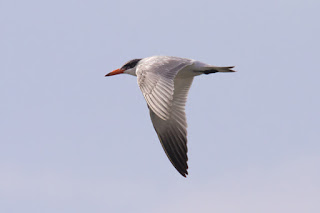 No doubt some of these Spoonbills will stay in the Algarve for the winter but many will find their way to Mauritania and Senegal.

After spending much of the summer in the UK in order to avoid the extreme heat of the Algarve we returned here in September to find that it was still pretty warm.  And so it continues with the temperature rising to 30º C again yesterday and there’s continuing, wall to wall sunshine forecast for at least another week.  Not that we’re complaining, of course, but it isn’t ideal weather for long birding days and it isn’t weather that’s been bringing in many of the scarce or rare migrants that we hope for at this time of year.

Having said all that, we’ve been birding most days since our return and it’s been great.  Mostly we’ve been in the Ria Formosa but there have been days around Castro Verde to see the specialities of that area and we have had a couple of trips to Sagres where raptors and seabirds are the main attractions; we also spent some time with the team from Brewood Ringers who had another very successful visit to the Parque Ambiental de Vilamoura. 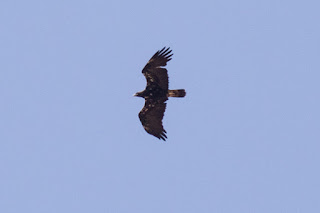 As always, there’s been lots to see in the Ria Formosa.  It isn’t difficult to find 20 or more shorebird species in a morning around the tidal areas and saltpans and it’s usually possible to see six gull species without too much difficulty.  There was a Pectoral Sandpiper last month and a Red-necked Phalarope but so far nothing more exotic than those.  It’s fair to say that not everyone we take birding shares our enthusiasm for waders and gulls and still we find that Little Bitterns, Black-winged Kites, Western Swamp-hens and Bluethroats are the biggest ‘crowd-pleasers’.

One or two Yellow-browed Warblers have appeared in recent days but rare passerines have otherwise been missing.  In former years the ringers have produced the goods – we remember a Common Yellowthroat, Common Rosefinches, a Paddyfield Warbler and an Aquatic Warbler turning up in mist-nets at Vilamoura in the recent past but this year their success was simply in the actual number of birds they caught and ringed rather than finding rarities – 1903 birds of 56 varieties!  Their efforts once again underline the importance of the Parque Ambiental to a wide selection of migrant species. 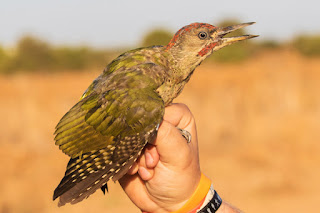 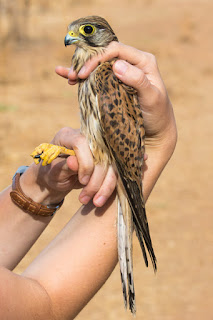 At Sagres we managed to see a reasonable number of raptors but to be honest it would have been nice to view them at closer range.  Some days they come closer to Cabranosa than others and we just haven’t been lucky.  Highlights there so far (and there’s plenty of time left for more) have been two Rüppell’s Vultures and a Lesser Spotted Eagle.  We did get a distant view of the eagle, coincidentally on the same date that we saw a much closer one in 2015.

Highlights among the seabirds have been two Brown Boobies and a Yelkouan Shearwater, both seen from Cape St Vincent.  Whilst there is a nice photograph of the Brown Booby, the shearwater record may not have such an easy passage through the hands of the Rarities Committee.  We went out to sea about nine miles with Mar Ilimitado and on a fairly calm day saw Cory’s, Balearic & Great Shearwaters, European & Wilson’s Storm-petrels, Northern Gannets and just one Great Skua.  Maybe it wasn’t the most productive trip we’ve ever done but it was certainly memorable.  There were close encounters with a Fin Whale, several Striped Dolphins and far more Common Dolphins than we have ever seen before. 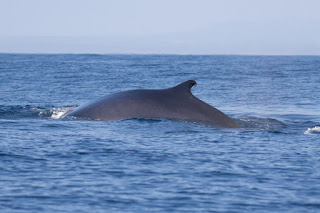 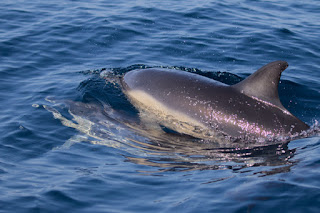 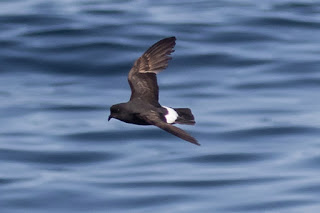 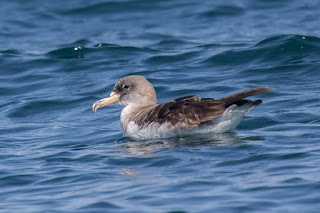 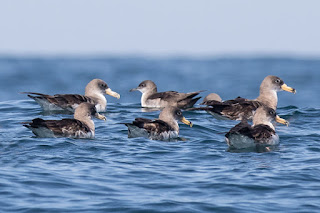 Five Cory's and one Balearic Shearwater

We continue to read and report inscriptions from colour-rings.  These include the regular rings on Spoonbills and Greater Flamingos but more interestingly we have seen recently a nine year-old Glossy Ibis that was ringed in the Doñana area and which has returned to more or less the exact spot that we saw it in 2010 and 2012.  Also a Slender-billed Gull is back in the same saltpan where we first saw it at this time last year. 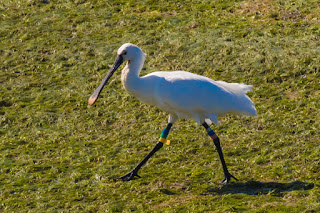 Spoonbill (ringed in The Netherlands)