Earlier this week we made the short trip to Hednesford, near Cannock, to see the flock of Waxwings that has been there since before Christmas.  Early reports had been of five birds but by last weekend this had increased to nine and we actually saw ten.

Waxwings or, more precisely, Bohemian Waxwings (Bombycilla garrulus) are starling-sized birds that are regular winter migrants to western Europe from their breeding grounds in Fennoscandia and Siberia and some reach Britain most years.  Not surprisingly, their first landfall in the UK is usually in the north or east and it is not every winter that they reach as far inland as Staffordshire. 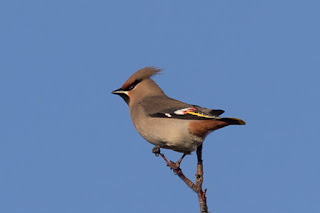 They have a particular liking for the berries of Sorbus spp. such as rowan but also take hips, haws and mistletoe and the berries of various ornamental trees and shrubs.  They are nomadic and irruptive and in years when large numbers arrive, they quickly strip the trees and move on in search of new food sources.  They are frequently seen feeding on exotic trees and shrubs planted in urban situations such as roadside verges, supermarket car parks, the surrounds of public buildings and private gardens. 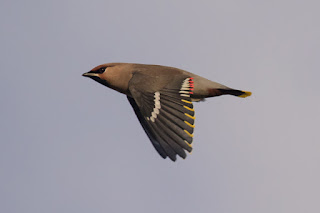 The genus name Bombycilla comes from the Greek bombux, "silk" and the Modern Latin cilla, "tail"; this is a direct translation of the German Seidenschwanz, "silk-tail", and refers to the silky-soft plumage of the bird.  The species name garrulus is the Latin for talkative and is said to be a reference to a supposed likeness to the Eurasian Jay (Garrulus glandarius) rather than to the Waxwing's vocalisations.  The English name "waxwing" refers to the bright red tips of the secondary feathers on its wings, which look like drops of sealing wax. 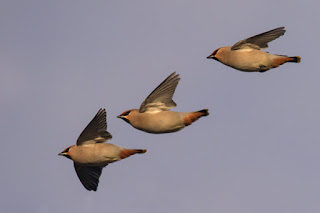 It is reported that in the past, the arrival of Waxwings sometimes coincided with epidemics of cholera or plague, and this led to the old Dutch and Flemish name Pestvogel, "plague bird". The juniper berries on which they fed were thought to offer protection, and people consumed the fruit and burned branches to fumigate their houses. 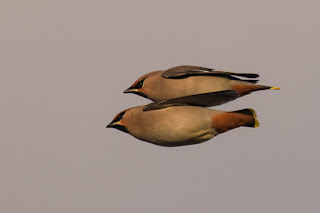 In past years Waxwings have often occurred in the urban and suburban areas surrounding Cannock Chase and those currently in Hednesford conform to that pattern.  Maybe the birds are initially attracted to the Chase as a safe roosting area or perhaps some birds are returning to an area where they have found good food supplies in the past. 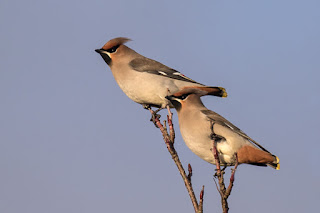 Some years there are none here at all but the winters of 1965/66, 1995/96 and 2010/11 have all seen several hundreds of Waxwings arriving in Staffordshire.  Because the birds are so mobile, precise counts are always difficult. but in January 2005 more than 2,300 were reckoned to be present in the county, a number that hasn’t been equalled before or since. 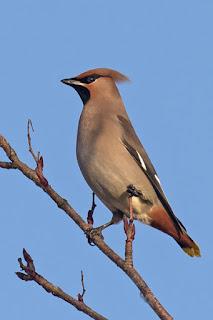 Most occur here between November and March but there are records as early as late September and as late as mid-May.  Often numbers increase at this time of year as more birds move west having exhausted food supplies elsewhere.  There is certainly a chance that more will arrive during the coming weeks!