Among the many birds that we saw during our recent visit to Thailand were ten species of leaf warblers from the genus Phylloscopus.  That’s Phylloscopus from the Ancient Greek phullon, “leaf”, and skopus “seeker” (from skopeo, “to watch”).  They included Dusky (P. fuscatus), Radde’s (P. schwarzi), Two-barred (P. plumbeitarsus) and Yellow-browed (P. inornatus), all of which have long been autumn vagrants to Western Europe and Eastern Crowned (P. coronatus) and Pale-legged Leaf Warbler (P. tenellipes), which have reached Britain for the first time only quite recently.

Identifying some of these warblers can be a bit of a challenge and so we were very pleased to have Neil Lawson with us to help sort them out!  Mostly they are very similar looking birds with greenish or brownish upperparts and off-white or yellowish underparts; most of them have eye-stripes and/or crown-stripes.  The fact that they tend to be very active, constantly moving and flicking their wings as they glean the foliage for insects, sometimes high in the trees, often makes it difficult to see them well and distinguish the finer details that are required to differentiate between them.  Although some have fairly distinctive calls, some don’t and anyway it takes time to get tuned into them. 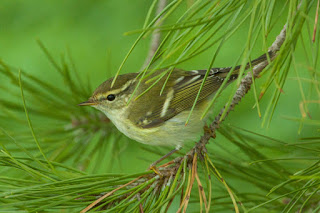 Although it was no longer calling and close inspection was possible, the Pale-legged Leaf Warbler that was found dead last October on St Agnes, Isles of Scilly, remained unidentified until analysis of its DNA.  That’s how difficult some of them can be! 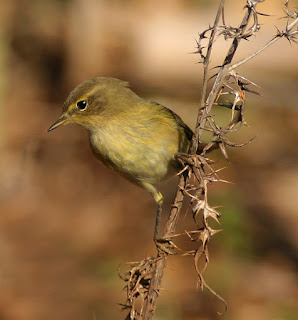 Of course, we have seen more than a few Yellow-browed Warblers over the years but the status of this species in Western Europe has changed markedly in recent times.  These are birds that breed in Siberia and normally migrate to spend the winter in the forests of South-east Asia.  However, every year in September and October a small number could be expected to arrive ‘by accident’ on the east coast of Britain.  Gradually over recent years the number of Yellow-broweds arriving in Britain has increased considerably and last autumn was exceptional. Back in the 1970s an annual total of about 70 birds was the norm; in 1988 there were more than 700 and in 2005 at least 1,250 were recorded.  Last year it was believed that there may have been 5,000 or more! 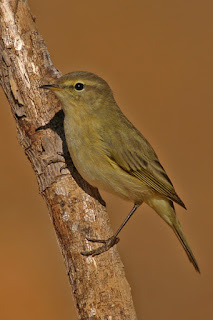 Not surprisingly, the increase in the number of Yellow-browed Warblers occurring in Britain has been reflected in the numbers seen in the Iberian Peninsula.  One theory is that these birds have taken to wintering in West Africa instead of South-east Asia and are passing through Spain and Portugal on their way south.  In Portugal the numbers occurring are still relatively small (about 40 in 2015) but the upward trend is clear and there have now been at least two or three instances of birds actually wintering here, including one that remains this week, reported again by Georg Schreier. 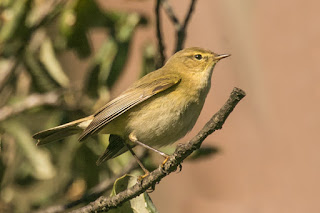 It was partly with the intention of tracking down the wintering Yellow-browed Warbler that together with Ray Tipper we set out a few days ago to Fonte Ferrea.  However, we also had another aim, which was to see and to photograph three species of Phylloscopus warblers in one morning.  It seems unlikely that there is currently any site in Europe other than this small park in the Algarve where this might be possible and the window of opportunity is quite a short one.  Presumably, the Yellow-browed can be expected to leave any day now and the same is true of the Common Chiffchaffs (P. collybita) that have been with us, as usual, throughout the winter but will breed further north.  The third species, Iberian Chiffchaff (P. ibericus), is now just returning to breed here after spending the winter away so there is just a small period of overlap. 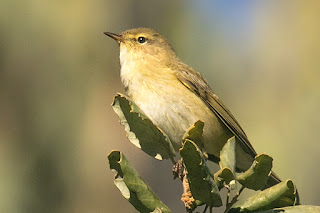 Not surprisingly, our ambitious mission met with only limited success!  We did manage to see all three species but the Yellow-browed showed no inclination at all to be photographed. Common Chiffchaffs are numerous in the Algarve in winter and have been photographed many times so in the end we didn’t bother much with them.  Instead we concentrated our efforts on the Iberian Chiffchaffs, which obligingly sang to confirm identification and sometimes remained still for just long enough for the lens to focus.  Eventually we did manage to get a few reasonable images, which all importantly are better than our efforts in previous years. It's interesting to compare these images with some of our old ones of Common Chiffchaff and to see how difficult it is to separate these species by plumage alone.

We have photographed Yellow-browed Warbler here in the past (at Castro Marim in 2013) and have included one of those images here.  It will be interesting to see what the autumn of 2017 brings but it seems very likely that there will be more opportunities to catch up with this remarkable little bird that seems to be undergoing a serious change in its migratory strategy.